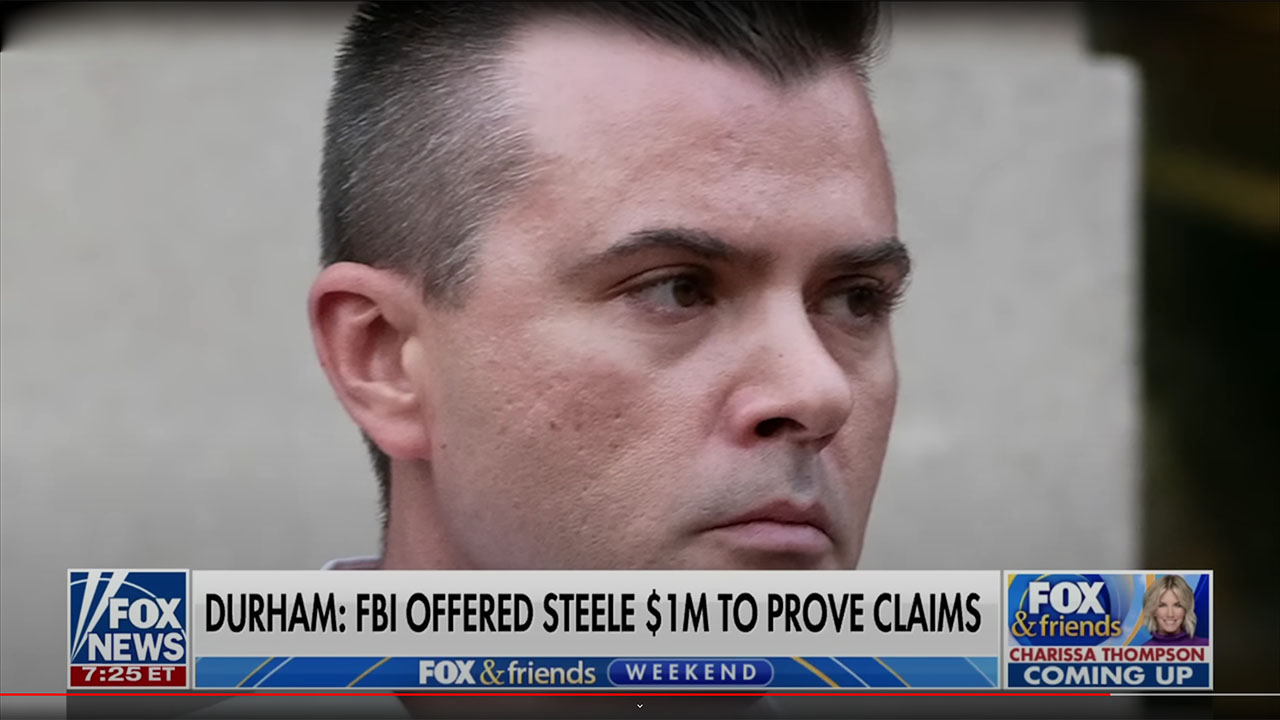 An email discovered among the unused trial exhibits in John Durham’s prosecution of Igor Danchenko has brought back into focus the wide-ranging criminal conspiracy against the 45th president of the United States whose major players were the U.S. intelligence community, the FBI and Department of Justice, the Obama White House, and the British government. The cover-up of this conspiracy has been a primary goal of the intelligence community and both political parties in Washington, D.C. ever since Donald J. Trump won the 2016 presidential election. The newly discovered email highlights one small, but methodologically significant, aspect of the coverup.

We have covered this coup extensively all the way back to 2017, highlighting the perfidious role of the British who tend to lead the stupefied U.S. intelligence community around by the nose. Beginning in late 2015 the British were demanding Trump’s head and tasked GCHQ and elements of NATO to gather dirt. They forwarded their leads to John Brennan at the CIA and demanded action lest the “special relationship” end. Under sponsorship from Victoria Nuland at the State Department for his role in the 2014 Ukraine coup, former MI6 Russia desk chief Christopher Steele became the lead author of the full spectrum information warfare operation conducted against Donald Trump.

The urgent necessity to maintain the cover-up, in the face of a possible MAGA Republican rout of the Democrats in the Midterm elections, explains the raid on Mar-a-Lago. As we have noted, many of the same agents now involved in the so-called “Trump Mar-a-Lago documents investigation” were key players in Russiagate. It also explains what appears to be a desperate attempt to eliminate Kash Patel as a critical witness for the 45th President by targeting Patel for obstruction of justice charges. The targeting of Patel was leaked to the New York Times on Wednesday, once again in complete violation of Grand Jury disclosure rules, Bar ethics rules, and Justice Department standards.

According to an astute article by Jeff Carlson and Hans Mahncke in the Epoch Times, the newly discovered email by FBI agent Kevin Helson to unknown recipients is dated January 12, 2017, and its heading reads, “Plan to Convert Danchenko into CHS.” The email was written after the FBI had discovered that Igor Danchenko was the primary source for Christopher Steele’s dirty dossier against candidate Trump, but before the FBI had even interviewed Danchenko. When they did interview Danchenko later in January 2017, he disavowed Steele’s dossier, stating that it was fabricated by Steele, Danchenko, and Danchenko’s barroom friends.

Yet, the FBI maintained the fabricator and liar, Danchenko, as a highly paid confidential human source (“CHS”) from March of 2017 until October of 2020 when he was terminated as a source after Durham’s investigation exposed the crucial facts. There was no reason to consider Danchenko for CHS status in January of 2017 except to cover up the fact that the FBI already knew, as of that date, that Christopher Steele’s dossier was a complete and total fabrication. Rather than ending the investigation of Trump right there, they continued the illegal operation and what was to become a soft coup against the President of the United States. The way they figured it, they simply had to cover their tracks, and making Danchenko a CHS, accomplished that. No one would find his role, or the fabrication, because the FBI could dodge all inquiries citing the need to protect “sources and methods.”

On October 3rd of 2016, according to Durham’s now documented account, the FBI offered Christopher Steele $1,000,000 to provide evidence corroborating the dossier’s wild claims, and Steele could not do so. On December 20th, the FBI had discovered that, as opposed to British intelligence sources deep within Vladimir Putin’s inner circle, as claimed by Steele and his collaborators, Steele’s main source was Danchenko who worked for Putin hater Fiona Hill as a researcher at the Brookings Institution in Washington, D.C.

Knowing that Steele’s claims were intended solely for information warfare purposes, and were fabricated and false, the Department of Justice and the FBI, nonetheless:

Made four FISA warrant applications targeting Trump aide Carter Page, using the Steele dossier as their primary evidentiary support, starting in October of 2016. They never told the FISA Court that the Steele dossier was a fabricated and unverified political dirty trick. The Page FISA warrants allowed the FBI to spy directly on the Trump campaign and presidency, with Page and people with whom he spoke in the campaign, transition, and presidency serving as walking microphones;

Pushed to have the phony dossier included in the Intelligence Community Assessment of Russian interference in the 2016 elections in order to establish legitimacy for its fake claims. In December, CIA chief John Brennan briefed Congressional leaders that Russia had intervened in the 2016 election to elect Donald Trump—prompting Barack Obama to order the FBI, CIA, and NSA to draft the intelligence community assessment. Based on the push by Jim Comey and Andrew McCabe, a two-page summary of the dossier was provided at the back of the ICA;

Briefed President-elect Trump on January 6, 2017, on the most salacious allegations in the Steele dossier, the so-called pee tape about Trump cavorting with prostitutes at the Ritz-Carlton Hotel in Moscow. As the result of DNI James Clapper’s conversations with the media, the existence of the Steele dossier and its inclusion in the ICA had been pre-leaked to the media. Right after what James Comey said was his “J Edgar Hoover moment” with Donald Trump, the entire Steele dossier was leaked to BuzzFeed and, for the first time, published across media throughout the world. Hence, the world welcomed the new American president with the “pee tape,” the salacious pornography produced wholly as the result of the propaganda skills of a British spy. Even as of March 6th, after Trump held his famous press conference in which he asserted that the FBI was spying on him, the FBI was still referring to the dossier as “Crown reporting” which had thoroughly checked out. On March 20th, Comey announced that the Trump campaign was under investigation for “Russian collusion” without ever revealing that the main support for the collusion claim, the Steele dossier, was a known fabrication.

Despite attempts to completely dodge the issue of the phony dossier by claiming it was “outside the purview” of the Mueller investigation, Special Counsel Mueller’s team also attempted to corroborate its claims according to new information unearthed by John Durham. Like everyone else, they came up completely dry when it came to veracity. In testimony elicited during Danchenko’s trial, the Mueller team shut down any inquiry by its FBI investigators into Charles Dolan, a close Clinton family operative who also played a role in the fabrications in the dossier.

Danchenko was a protégé of Russia “expert” Fiona Hill at Brookings. The British-born Hill has made a career out of pop psychoanalysis of Vladimir Putin, framing the propaganda narrative which has substituted, in U.S. and British intelligence circles, for any sound or truthful analysis of the history, culture, and strategy of the modern Russian state. Steele describes Hill as a close friend who introduced him to Danchenko. Hill headed the Russia desk at the Trump National Security Council, and later became a key witness against the President during his first impeachment trial.

A Priority for a New Congress

In addition to witnessing President Trump’s declassification of documents which are at the center of the Mar-a-Lago case, Kash Patel’s knowledge of the coup against the President is perhaps only exceeded by that of John Durham now. Patel was the chief investigator for the House Select Committee on Intelligence which effectively disproved the Russian hand in the “hack” of the DNC and John Podesta, and the transmission of the purloined documents to WikiLeaks. The hack that wasn’t and the Steele dossier were the central claims in the Russiagate hoax which not only damaged the Trump presidency but also irretrievably damaged the potential for decent U.S.-Russian relations which President Trump promised the American people in his 2016 campaign. The actual obstructors of justice, the FBI and DOJ, need to take Patel out of the picture if their cover-up is to continue, just as they took Michael Flynn out of the picture at the beginning of the Trump Administration.

While it is tempting to make Hunter Biden and the Biden family pay-to-play allegations the center of the incoming Congress’ investigative efforts and hearings, it must not stop there. The full story of the coup against the 45th President of the United States must be told as an urgent priority, if we are to save and secure our republic. That story should be told by a Congress which also effectively uses its funding and investigative authorities to end the witch hunt against the 45th president once and for all.