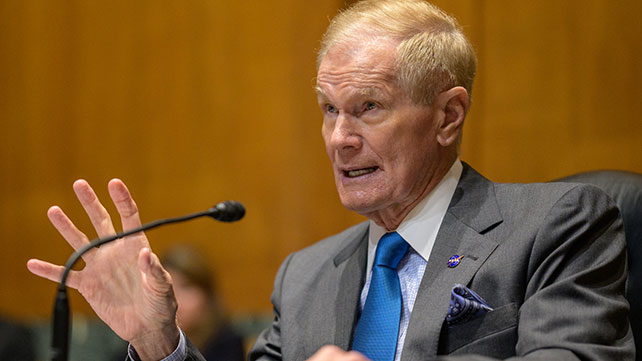 If NASA Administer Bill Nelson continues to promote the "woke" criteria of critical race theory and identity politics, along with man-made climate change as the basis for scientific and technological competence in our quest to conquer space, he will likely be responsible for a catastrophic loss of American Astronauts at some point in the not too distant future. Simply put, you cannot play games with the frontiers of scientific and exploration missions. This is not about transgender bathrooms in a sociology department, where such foolery will not pose an immediate threat to human life. In this case, when dealing with the critical mission of human exploration in space, where the actual physical laws of the universe are at work, the consequences of such ideological and pseudo-religious doctrines will be far more dire.

Besides the actual casualties of some our best trained scientists, greatest explorers, true patriots, and endearing fathers and mothers, this tragic loss, as we saw with the shuttle incidents of the Challenger and Columbia, will be combined with the erosion of political support for the most important of American endeavors, namely, the permanent colonization of the Moon and Mars via the Artemis Project.  This project has a greater potential impact on the future of the American and global economy than perhaps any other project currently under development by our government.

Our space program must be led by a commitment to a national mission for economic progress, driven by true scientific, human creative discovery, and exploration; this, regardless of race, gender, or the pronoun by which one identifies themselves.

From the very moment that President John F. Kennedy outlined his vision and commitment for U.S. leadership in space with goals of landing a man on the Moon and returning him safely to Earth; the United States space program has been under continuous attack. From the standpoint of the budget cutters and radical environmentalists, the space program got in the way of their agenda, and that agenda was, and continues to be, to destroy the inherent optimism of the citizens of the United States, by rendering impotent our national mission as the font of unlimited human potential and creativity. This is the mission expressed in our Declaration of Independence and the Constitution’s Preamble—a mission realized in our exploration of previously unknown scientific frontiers and space.

The Shuttle program, compared to the wholly successful Saturn V Apollo program, was set up to be an “economically viable” means of transportation, and, even that, only to low earth orbit. By the 1980s, the objective for the space program had become making spaceflight cheaper and to minimize its cost.

The corrupt FBI prosecution of NASA administrator Jim Beggs in 1985, which was dropped two years later, ultimately led to the tragic loss of human life. Beggs was forced to resign as NASA administrator during the witch hunt against NASA officials.  The Challenger Shuttle was launched in unfit weather conditions, something which never would have happened under Beggs. The explosion of Challenger tragically ended the lives of seven astronauts.

Beggs made clear that he knew the attacks against him by officials of the DOJ were “politically motivated”. At NASA Beggs made his views very clear, and they certainly did not fall in line with those pushing cost cutting measures or going along with the radical environmentalist, population reduction climate agenda.  In a speech made not long before his indictment, Beggs was quoted as saying:

“More than a century and a half ago, there were the luddites. More recently, there was the Club of Rome...The fundamental error made by the luddites, the Club of Rome, indeed by the Malthusians and others who have shared their philosophy is one of forgetfulness. They forget to remember that the human imagination is not finite.”

During this year’s Global Space Conference, GLEX 2021, held in St. Petersburg Russia, June 14-18, there was a stark contrast between the priorities for space exploration outlined by Russia and China, and their joint efforts with other nations centered on building an International Lunar Research Station (ILRS) Project, and the return to the luddites and Club of Rome climate agenda outlined by NASA Administrator Bill Nelson.

Nelson’s statement to an opening panel of the conference expressed concerns about climate change, echoing the central prong of Joe Biden’s luddite agenda. Nelson talked about the major observatories going up to observe the different parts of the earth’s climate, while giving only lip service to the Artemis program, the flagship NASA human exploration initiative.

The Artemis program, first outlined under the Administration of President Trump, promises to finally return American astronauts to the Moon by 2024, with the first woman and the next man, and calls for creating a sustainable and permanent presence on the Moon, using what we learn there to pave the way for human missions to Mars. That is, to pick up where we left off with Apollo, and to go further in our exploration of the heavens.

Under any NASA Administrator, the number one priority has to be the defense of human life, and emphasis on the most advanced scientific and technological breakthroughs are the only means for our success. Don’t be bamboozled, racial equity has nothing to do with equality. Focusing our space program on so-called man made climate change, race, and gender identity; or brainwashing our children with critical race theory does not create geniuses, advance creative discovery, or drive a productive economy.

In a sentence: You can’t send humans to the Moon and Mars, and return them safely, with policies that kill people.

Either Administrator Nelson finds the where-with-all that enabled him to become an astronaut in the first place, publicly and courageously acknowledging that scientific competence is as central to managing critical human space operations as it is to scientific research itself, even more so, or all of us will suffer what will be an inevitable and unnecessary tragedy which will once again derail mankind's greatest mission.