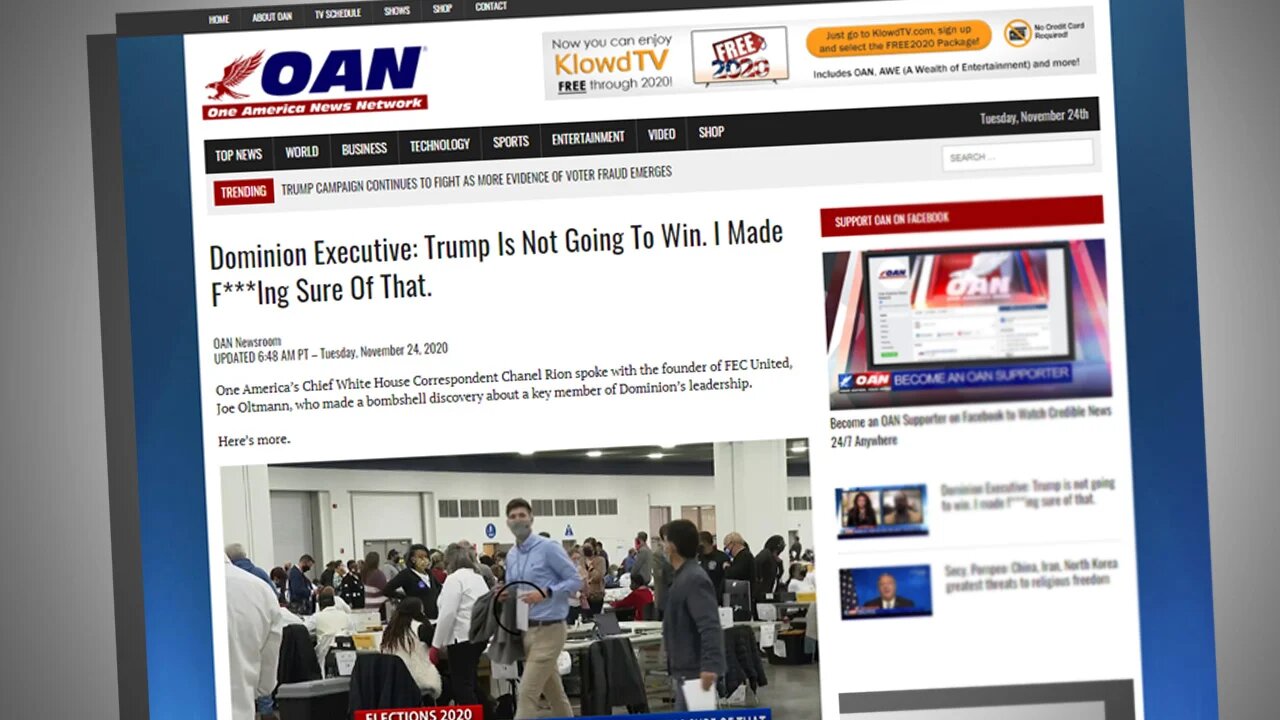 Donald J. Trump was re-elected to the presidency on November 3, 2020.

On November 21st, President Trump tweeted the Chanel Rion series on OANN regarding Dominion Voting Systems, the Canadian company with a sordid history of voting irregularities. That series is excellent from the standpoint of solid investigative leads regarding the fraud which occurred in the Presidential election and we recommend it to our viewers.

On November 23rd, Dr. Robert Epstein appeared on Tucker Carlson’s broadcast. Dr. Epstein studies deliberate manipulation of behaviors by BIG TECH, most specifically Google and is the recipient of numerous leaked documents by whistleblowers from Silicon Valley. His estimate is that Google’s systemic bias against Donald Trump with regard to rigged searches, censorship, and get out the vote efforts on behalf of Democrats resulted in six million votes for Democrats. This also is a recommended watch for our viewers.

It is abundantly clear that the fraud of 2020 was a multi-faceted effort involving direct censorship of the President of the United States as well as direct censorship of any negative information about Joe Biden, and utilization of COVID to rewrite and eliminate laws which were checks against vote fraud in key battleground states. COVID was also used to generate massive fear within the population directed at the President.

Simultaneously, targeted deadly psychological warfare was directed at those who might act to right the ship of state, such as Attorney General Bill Barr, along with massive waves of disinformation about voter fraud, intended to drive investigations on a time clock down fake rabbit holes. Key agents in place, such as the DOJ Election Integrity Chief Richard Pilger, and Homeland Security election Cyber Chief Christopher Krebs were whitewashing the fraud before the President fired them.

But this leads now to the critical question. Who replaced Krebs and Pilger and who is looking at this at this and investigating it at the required federal level? There are criminal violations of the federal Civil Rights laws implicated here along with criminal violations of the Federal Election Campaign Act. Did the efforts of the CIA/NSA, Homeland Security Cyber, to allegedly prevent the much ballyhooed but non- existent foreign interference in the election actually create the fraud? What were the interfaces between these agencies and voting officials in the battleground states? How is it possible that the counting simply stopped in the battlegrounds and a new result was manufactured without a central coordinating mechanism?

The election cannot stand if the Republic is to stand. That is what this battle is about. These are the questions which need to be asked. Where is the DOJ?