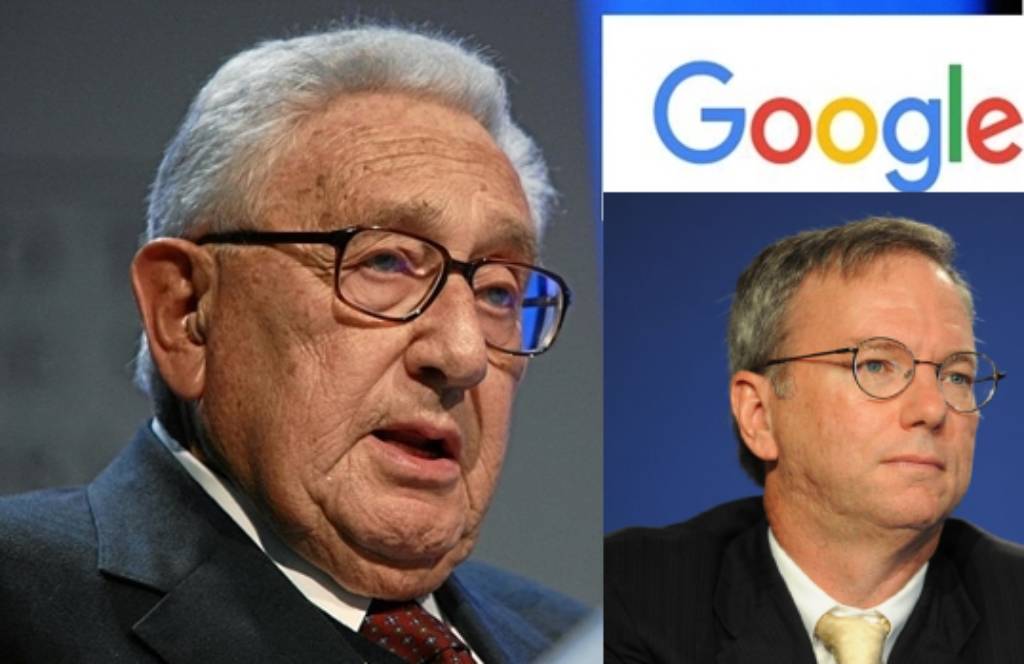 Will Henry Kissinger and Silicon Valley’s Nerds Finally Destroy America? -- Are you ready for this? Billionaire former Google boss Eric Schmidt has led a successful effort to divert ever-increasing parts of the U.S. defense budget away from weapons systems, and into–guess what?–Silicon Valley! For the last four years, Schmidt has chaired a “high-level” government task-force, jointly with military Utopian Robert Work, which promises that if enough money is shifted away from weapons systems into “artificial intelligence (AI),” then some new, tricky way will surely be found to win future wars.

This utopian insanity has now been incorporated into the 2021 Defense Authorization Act. By diverting vital economic potential to the garbage heap of Silicon Valley, the remaining U.S. machine tool and advanced manufacturing infrastructure, currently and awfully only extant in the “defense industry,” is put on the chopping block. Accompany that with the current push for “equity” rather than intelligence in our military, and the continuing push for a total domestic surveillance state emanating from the same Silicon Valley, and you have a recipe for the final destruction of the United States.

During this time, Schmidt has teamed up with none other than Henry Kissinger to tell us that negotiations about robots triggering themselves to launch wars, independent of human beings, is the fundamental security issue between the United States, China, and other nations--as AI will inevitably, in their view, change the very nature of civilization itself. Kissinger, Schmidt, and MIT’s Daniel Huttenlocher have teamed up to write an already much-ballyhooed book about this, scheduled for release in September.

This idea is a continuation of the reshaping of the U.S. military which began with the “Revolution in Military Affairs,” under Work’s late boss Andy Marshall and former Defense Secretary Donald Rumsfeld, which led to the disasters in Iraq, Libya, Syria, and Afghanistan which followed--and which Donald Trump attempted to end. Yet Schmidt and Work have won over the civilian defense bureaucracy and key Congressmen of both (uni-) parties to their promises. In this march to destruction, control over war-fighting has been usurped by civilian “experts” who have never seen war, like Hillary Clinton, Susan Rice and Michele Flournoy. It now looks like Kissinger -- his head on the verge of disappearing into his body at the age of 97 – has entered the process at the request of his British sponsors, in an attempt to give this madness an air of so-called Realpolitik gravitas.

Only people whose own intelligence is a mere artifice, can believe that there is such a thing as “artificial intelligence.” These sorts of computer programs are good at facilitating mass spying through the internet, as in the “spy-and-sell” business model which Schmidt introduced into Google in 2000 and after.

But if you imagine that so-called “artificial intelligence” has any relation to winning actual wars, you know nothing about war, particularly the ones conducted by the United States on behalf of British imperial and geopolitical interests after World War II, and, in their most recent iteration, after 9/11. Patriots of nations fighting foreign invaders have defeated the purportedly invincible imperial behemoths on every occasion, using low-technology and readily available weapons, such as IEDs. Read Dana Priest and William Arkin’s 2011 Top Secret America, if you want to get an idea of how many billions of dollars have already been thrown out the window chasing these adolescent fantasies, rather than re- industrializing the United States on a modern technological platform as Donald Trump promised.

Scientific and technological breakthroughs, and the science-driver programs which cause them (like the Manhattan Project and John Kennedy’s Project Apollo), are the levers for the advancement of the human condition. This is one of the secrets of the American System of political economy, which has been successful whenever it was used, as under Presidents Lincoln and Franklin Roosevelt. In fact, this is a cornerstone of what it means to be an American.

But, if you eliminate military industry and the defense sector, or nearly so, as Schmidt proposes, you throw what remains of our advanced-technology economy in the garbage. Under the Schmidts of the world, our future is the dystopia of a strange sort of primitivistic police-state, somewhat resembling George Orwell’s 1984. The standards of life and education of the great majority will be at pre- industrial levels, while an elite deploys a narrow sort of higher technology to surveil the deplorables for signs of dissent.

The American people have sensed this and understand that the nation is now at stake. A Second American Revolution has now begun against any such project. Somewhat as Percy Shelley wrote, “We are many; they are few.” And even beyond that comparison, the advantage lies with those whose intelligence is of the creative, God-given kind, rather than the artificial.