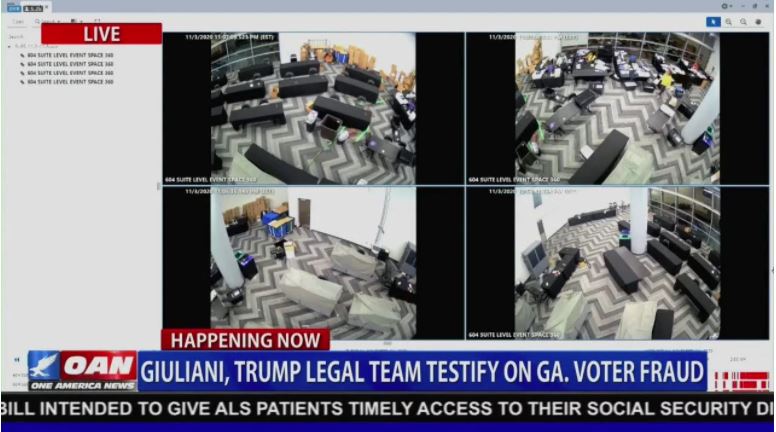 Of all the evidence, from hundreds of sworn witnesses in many states, of vote fraud and illegal election procedures to steal this election from President Donald Trump, the video from Atlanta’s vote-counting center, alone, should convince the world that something unprecedented has occurred.

How could Democratic election officials and workers commit such a copious and obvious fraud for two hours — with “mailed-in” ballots secretly concealed from observers and other workers who had all been told that counting was finished for the night and ushered out — so arrogantly that they were unconcerned that their own video monitors were watching and recording their acts? This obscene confidence was of operatives convinced that the plan — that this election would get rid of President Trump by whatever means necessary — was accepted by every official of influence of either major party, who might be confronted with such evidence.

The British House of Lords had already in 2018 pronounced a second Trump term intolerable; Wall Street bankers had shown by their contributions and their comments that they wanted the President out; leaders of British and U.S. intelligence-connected think-tanks such as the Transition Integrity Project had openly wished for a military coup against the President while “planning for a secure election”; a 2019 mobilization had pushed states to buy new voting systems from a company headed by a British Privy Council member bragging that he’d fixed elections in another country to remove “an autocrat.”

A City of London-Wall Street financial oligarchy, with its NATO military-financial complex, planned to steal the U.S. election to force President Trump out of office, in order to get a United States under Joe Biden supporting policies that threaten the entire human population. Trump had moved against their Paris Climate Accord, against their geopolitical war policy, and revived a Moon-Mars mission they thought only Lyndon LaRouche still fought for. This “imperial” oligarchy had been attacking Trump and the forgotten men and women who support him for four years—the theft of the election only being the last act in a coup d’etat. The plans for the steal were already in place following the failed impeachment. They are encompassed in Nancy Pelosi’s H.R. 1, the first act of the new Congress following the 2018 elections, elections which themselves also were, in all probability, permeated with fraud.

It is those City of London-Wall Street policies of forced “green” investments and taxes, economic sacrifice, stunted agriculture, population reduction and depopulating wars which President Trump has disrupted. They must be fought with determination and optimism by Americans –first through a complete and total exposure of the fraud which was conducted against Donald Trump and an all-out battle, in the streets and in the statehouses, to seat the real winner of the election, Donald Trump. Those not joining this battle, the RINOS the President has identified, do not deserve their seats. If this battle is lost, we keep fighting and like Washington at Yorktown, after enduring numerous defeats, we will emerge triumphant. The illegitimate Avatar President, if seated, must not be allowed to carry forth his policies and the statehouses and the Congress must become the stage for the new American Revolution, fought by patriots who are simultaneously educating themselves to govern in place of their corrupt predecessors.

This economic battle, against the oligarchy that has fixed a “regime change” election in the United States, carries the potential for a return from the 2008 global financial crash and the COVID pandemic to science, reason and progress. Lyndon LaRouche was blocked in 2007 by the same financial oligarchy, in a fight across many American states, from getting through a solution that could have prevented that crash. He then raised the stakes to the world economy, as he explained in 2009:

“In the first stage, what I proposed was legislation which was campaigned for throughout the states of the United States, for a resolution by state governments, to push through national Congressional legislation, to put the entire mortgage system of the United States into receivership under bankruptcy protection, in which the householders would remain in their homes, and we would, in due course, settle and resolve the mortgage debt….

“We have two questions here: Not only how to deal with the problem of the economy, but, how do we deal with the world economy as well. Because we have to maintain stability among key nations. I have picked out four nations, as absolutely crucial, that they must cooperate, because with their cooperation, and with that of others who join them, it will be possible to take reorganization of the world economy, by eliminating financial derivatives…. Go back to the honest debt of nations, go to a commercial banking standard, and create new credit to replace the worthless old debt. By creating new credit, and launching physical production programs, in infrastructure and other terms, we could, by agreement among nation-states, prevent a general collapse, and actually launch a program of orderly recovery. And these problems that we now face could be solved.” (LaRouche in Rhodes: A Four-Power Agreement Can Create a New World Credit System," EIR, Oct. 23, 2009.)