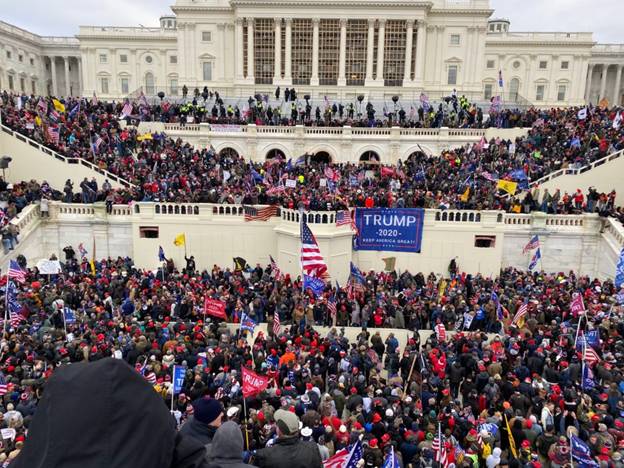 This article originally appeared over at Col. Pat Lang's blog, https://turcopolier.com/ and is posted here with the author's permission. Larry Johnson also details more about the FBI's actions on January 6th in this accompanying piece.

It is essential to be very clear about what happened and what did not happen. This was not a “riot” if riot means people hurling rocks and bottles or igniting Molotov cocktails and torching all structures in their reach. The vast majority of those who entered the Capitol behaved more as tourists than anarchists. There was no wanton, massive destruction of art work, furniture or signs inside the building. Walls were not covered with graffiti or feces.

Most importantly, the Trump supporters did not kill a single person. I want to reiterate that point because my bookkeeper, who had listened to the media lies, believed that at least seven people died and that the Trump folks killed them all, including the Capitol policeman. All a lie.

Glenn Greenwald did a masterful job in deconstructing this monstrous propaganda:

One of the most significant of these falsehoods was the tale — endorsed over and over without any caveats by the media for more than a month — that Capitol Police officer Brian Sicknick was murdered by the pro-Trump mob when they beat him to death with a fire extinguisher. That claim was first published by The New York Times on January 8 in an article headlined “Capitol Police Officer Dies From Injuries in Pro-Trump Rampage.” It cited “two [anonymous] law enforcement officials” to claim that Sicknick died “with the mob rampaging through the halls of Congress” and after he “was struck with a fire extinguisher.”. . .

After publication of these two articles, this horrifying story about a pro-Trump mob beating a police officer to death with a fire extinguisher was repeated over and over, by multiple journalists on television, in print, and on social media. It became arguably the single most-emphasized and known story of this event, and understandably so — it was a savage and barbaric act that resulted in the harrowing killing by a pro-Trump mob of a young Capitol police officer.

It took on such importance for a clear reason: Sicknick’s death was the only example the media had of the pro-Trump mob deliberately killing anyone. In a January 11 article detailing the five people who died on the day of the Capitol protest, the New York Times again told the Sicknick story: “Law enforcement officials said he had been ‘physically engaging with protesters’ and was struck in the head with a fire extinguisher.”

But none of the other four deaths were at the hands of the protesters: the only other person killed with deliberate violence was a pro-Trump protester, Ashli Babbitt, unarmed when shot in the neck by a police officer at close range. The other three deaths were all pro-Trump protesters: Kevin Greeson, who died of a heart attack outside the Capitol; Benjamin Philips, 50, “the founder of a pro-Trump website called Trumparoo,” who died of a stroke that day; and Rosanne Boyland, a fanatical Trump supporter whom the Times says was inadvertently “killed in a crush of fellow rioters during their attempt to fight through a police line.”

Got it? The only person to die as a consequence of a deliberate act of violence (i.e., shooting a pistol) was Ashli Babbitt, an unarmed Trump supporter shot by a still unnamed cop.

I understand why the Democrats embrace the lie of an insurrection as a pretext to destroy all vestiges of Trump and his supporters. They want us dead. But I am damned if I understand why so many Republicans are playing along with this perfidy and embracing the deceit of an insurrection that did not happen. People entering the U.S. Capitol at the invitation of some of the U.S. Capitol police is not the breakout of a violent revolution.

But Biden, the Democrats and much of the media are committed fully to using this falsehood, this damnable prevarication, as a weapon to bludgeon anyone who tries to speak the truth about what really happened. If you do not denounce the insurrection then you are a domestic terrorist and must be dealt with.

What should really scare the hell out of you and out of every honest civil libertarian are the subsequent actions of America’s GESTAPO aka the FBI. (And yes, they have become an American version of the Gestapo–carrying out partisan political attacks and ignoring the Constitution.) Ken Klippenstein, writing at the Intercept, is the only one so far to report this:

Within hours of the storming of the Capitol on January 6, the FBI began securing thousands of phone and electronic records connected to people at the scene of the rioting — including some related to members of Congress, raising potentially thorny legal questions.

Using special emergency powers and other measures, the FBI has collected reams of private cellphone data and communications that go beyond the videos that rioters shared widely on social media, according to two sources with knowledge of the collection effort.

In the hours and days after the Capitol riot, the FBI relied in some cases on emergency orders that do not require court authorization in order to quickly secure actual communications from people who were identified at the crime scene. Investigators have also relied on data “dumps” from cellphone towers in the area to provide a map of who was there, allowing them to trace call records — but not content — from the phones.

And the FBI did not limit its illegal searches to just your average Trump supporter strolling around the Capitol grounds on January 6. The Bureau also grabbed phone records of members of Congress, but only Republicans. (I recommend you read the rest of Ken’s story to appreciate how dangerous this situation is and will become.) Congressman Matt Gaetz understands. He tweeted out Klippenstein’s excellent report:

This story is jaw-dropping.

We should hold hearings in the House Judiciary Committee to review how and why the FBI was gobbling up phone data from their critics.

The vast majority of Trump voters and supporters are law abiding, peaceful folks. The rabid, radical left now in charge of the Democrats mistakes this silence for stupidity and weakness. But we are not going to acquiesce to such bullying and abuse. Most importantly, we are not going to accept the tsunami of lies sweeping over the airwaves and the internet.

This is the line in the sand separating decent Americans from those lost souls keen on destroying this Republic. The Trump supporters who gathered in Washington on January 6 are not racists nor insurrectionists. They are patriots who love this nation and what it is supposed to stand for. But they also are men and women who witnessed a fraudulent Presidential election and the subsequent abdication of  the very institutions of law enforcement and justice that were supposed to uphold the rule of law.