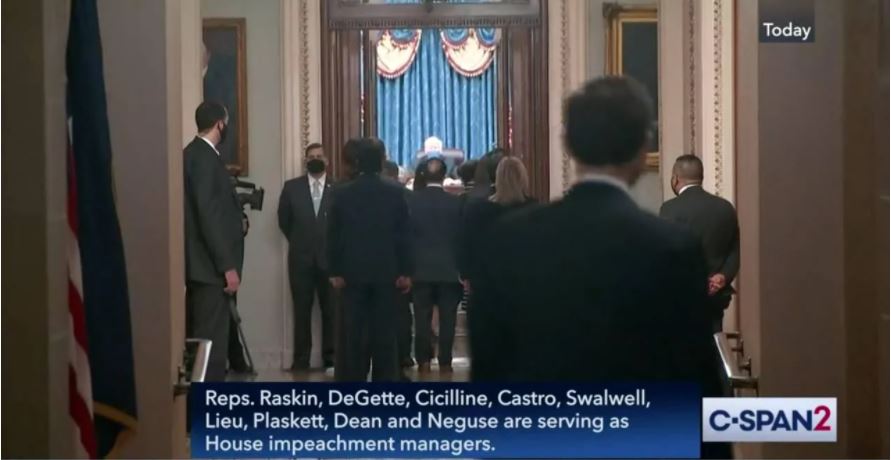 Day One of the second Trump Senate impeachment trial is over. It is supposed to distract and further polarize the American population as the fake President now in the White House implements an economic agenda which intends to enslave the vast majority of the American people. Two-thirds of the Senate must vote to convict under the Constitution and the 17 necessary Republican votes simply aren’t there. But, the fake Trump hate show will continue, nonetheless.

On the ground, throughout the nation, the backlash is mounting. The anger of Trump supporters is transforming itself into a focused organization to run for public office, at all levels, in order to save the nation. They are neither shamed nor intimidated despite the massive effort to accomplish both results.

Tuesday’s charade featured opening arguments and a vote on the initial motion to dismiss the charges based on the claim that it is unconstitutional to impeach a President who has left office. As expected, the motion to dismiss was defeated with a 56-44 mostly party line vote. The six Republicans turncoats are Senators Lisa Murkowski of Alaska, Susan Collins of Maine, Ben Sasse of Nebraska, Pat Toomey of Pennsylvania, Mitt Romney of Utah, and Bill Cassidy of Louisiana. Only Murkowski is up for re-election in 2022. Cassidy, who has been promoting himself as a vacillator to the news media ever since the January 6th Capitol riot, was immediately rebuked and censured by the Louisiana Republican Party. The same state party censure movement greeted Ben Sasse from Nebraska.

On January 27th, Senator Rand Paul had attempted to kill the House’s perfidy by declaring it constitutionally void ab initio, getting 45 Republican votes then. Senator Cassidy was among them.

The legal question before the Congress has been debated at length by law professors and lawyers throughout the nation’s history. Joseph Story, whose commentaries on the Constitution are considered definitive because of his close relationship to the founders, thought that the Constitution did not provide for impeachment of former officials, based on the Constitution’s plain text and because the founders otherwise so differentiated themselves from their British oppressors. Under Crown procedures former officials could and were regularly impeached in trials by legislature. Those British precedents were heavily relied upon by the Democrats in their arguments Tuesday.

John Quincy Adams, on the other hand, thought it a matter of public honor that officials should be able to be impeached for anything done in office. In the recent period, hoards of law professors who are constitutional revisionists, advocates of critical race theory, and Trump haters have emerged to argue for Trump’s impeachment, early and often.

The House impeachment managers’ opening, led by Rep. Jamie Raskin, was a grotesque emotional hoax intended solely to exploit the fear and hysteria which gripped House and Senate members on January 6th. Taking a page from Silicon Valley’s long running Trump hate campaign, conducted through the sex scandal plagued Lincoln Project every night in prime time, Raskin’s presentation centered on a 13 minute slicked up Hollywood and law firm professionally produced video, splicing together scenes from the riot, with out of context quotes from President Trump’s January 6th speech. Conspicuously missing was the President’s strong direction to the crowd to protest peacefully. Raskin went so far as to invoke his son’s death by suicide on New Year’s eve and burial on the day before the Capitol riot, as somehow related to the reasons why President Trump should be impeached.

While there has been much criticism of Trump lawyer Bruce Castor’s unfocused and rambling opening statement, including by President Trump himself, he made the essential point: this is only about denying Trump’s ability to run for office again, not the staged riot or hoary constitutional precedents. David Schoen, Trump’s other lawyer, argued that the entire proceeding was an unprecedented attack on free speech and Trump’s supporters in violation of every measure of due process and in defiance of the actual emerging facts concerning the events of January 6th. The House impeachment article is also an unconstitutional Bill of Attainder, the favored instrument of the British Crown, denounced by name in the Constitution, aimed at banishing Trump forever politically and disenfranchising 74 million Trump voters.

The President, in reality, did not even come close to inciting the crowd gathered to hear him on January 6th. In fact, every piece of actual evidence emerging from recent indictments and official statements points to complete law enforcement awareness of the probability of a violent attack on the Capitol on January 6th. The attack was pre-planned extensively well before January 6th, law enforcement knew about that pre-planning, and security at the Capitol was taken down, despite this, by those responsible. Congressman Devin Nunes, who has been right about many aspects of the coup against Trump, is saying that Speaker Nancy Pelosi is responsible for the security takedown.