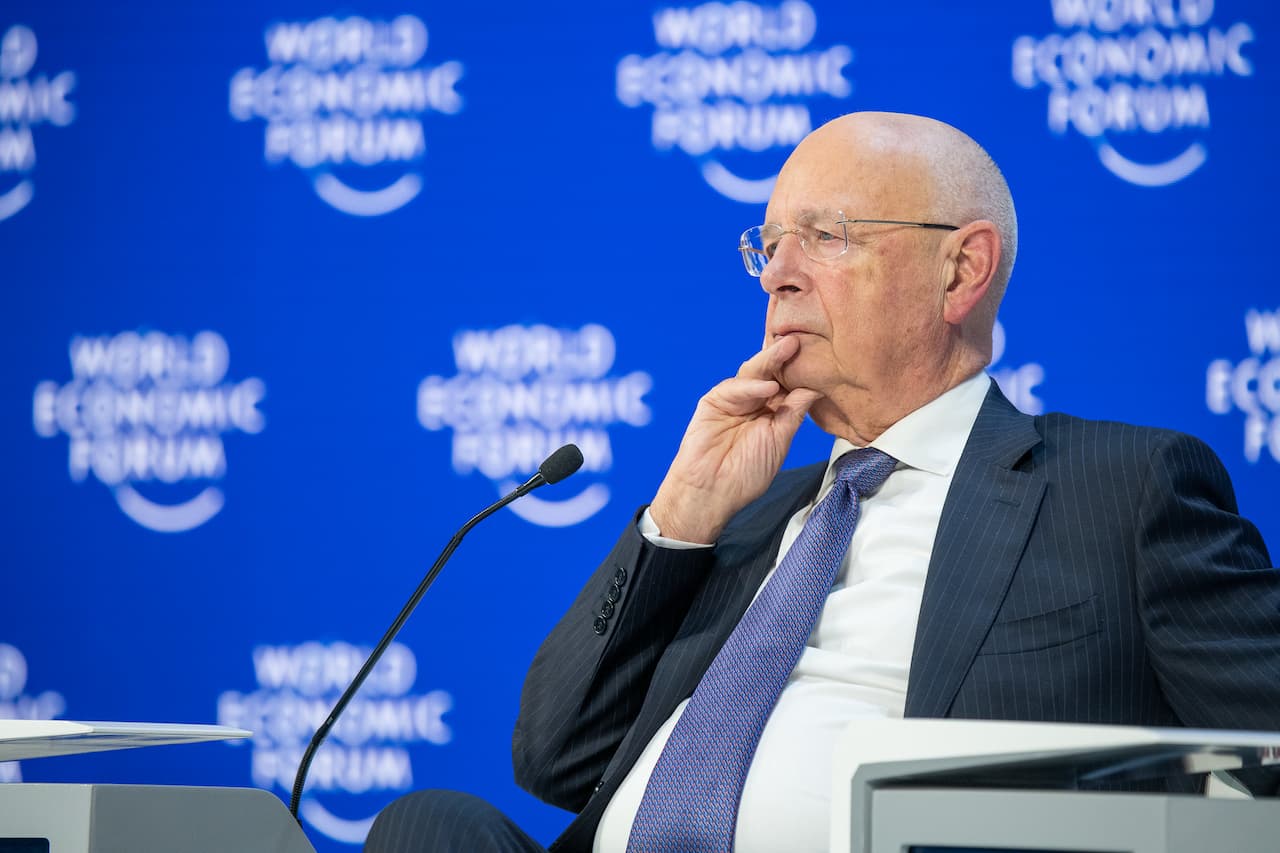 In years gone by, many world leaders—even though they should have known better—viewed the annual conferences of the World Economic Forum as benign gatherings of the political elite, as an opportunity for policy-makers to meet and discuss the pressing economic and social issues which confront many nation-states and humanity as a whole more generally.  After all, the organization bestowed upon itself the grandiose title of the World Economic Forum.

—President Donald Trump, address to the General Assembly of the United Nations, September 24, 2019

Beginning with the announcement of the proposed Great Reset at the 2021 Davos Summit, however, any lingering illusions as to the intention and purpose of the World Economic Forum have been forcibly dispelled, and any continuing involvement in the activities of that Forum—by world leaders who are morally and politically answerable to the people of their own nations—is now exposed as vile treason and a betrayal of their own nation-states.

Perhaps the leaders of the poorest of nations might be excused from their moral responsibilities, since they have been reduced to begging for crumbs from the imperial financiers, and even European leaders might seek to hide behind a defense that they are now no better than powerless Reichsstatthalter (Reich Governors) within the E.U. financial dictatorship.  But what of Japan, India, the United States, and China?  What excuse do they have for their ongoing genuflections before the altar of WEF founder Klaus Schwab?  Why do they continue to willfully participate in evil? [1]

The Conference in Brief

The 2022 conference of the World Economic Forum, which concluded today, had little to do with economics, except for how changes in economic and financial policy will further the goal of a global transformation of human culture and the elimination of national sovereignty.  The featured speeches of Ursula von der Leyen (President of the European Commission) and Janet Yellen (U.S. Treasury Secretary) ensured that the financial prescriptions of the Central Bankers were presented center stage, but otherwise, almost the entirety of the five-day conference was devoted to various aspects of transforming human society—a cultural jihad, so to speak.

A number of topics were discussed, but the two which took up most of the air in the room were, first, how the Covid pandemic has created the potential for a profound reordering of society across the board.  The crocodile tears were flowing freely as the speakers professed angst about the human suffering the pandemic has wrought, but they were all very hard-pressed to restrain their glee at this opportunity to vastly expand the power of the Malthusian oligarchy.  It should be noted that early in the pandemic, Klaus Schwab wrote that the crisis provided the opportunity to “to revamp all aspects of our societies and economies, from education to social contracts.”  Schwab has been explicit that when the COVID-19 pandemic ends, the world will need—in his words—“a new governance model.”

To provide a tangible idea, in terms of economics, as to what is planned, consider the remarks of Janet Yellen who stated that the “economic recovery [under Joe Biden] has exceeded even the most optimistic expectations.  It is a stunning achievement”—delivered with a straight face and with Klaus Schwab nodding in approval.

The second major topic at the conference was the shared determination to implement the vision and diktats of the recent COP26 “climate conference.”  Every nation will submit.  Fossil fuels will be banished.  Mother Earth will be protected from mankind.  The word “green” was uttered in hushed reverent tones, and nary a word of dissension from the green agenda was heard from any of the speakers.

A full description of all of the speeches at the conference would bore the reader to death, so here are just a few of the highlights:

Tony Fauci devoted most of his speech to complaining that U.S. society is plagued by disinformation regarding the COVID-19 pandemic, calling it “destructive to a comprehensive public health endeavor.”   Bill Gates gave a speech where he called for a worldwide carbon tax, and John Kerry demanded “We have to get every country off using coal.”  There was the obligatory appearance of UN Secretary-General Antonio Guterres, who spoke on “reforming” the global financial system.  Al Gore called for reorienting all space flights to combating “climate change.” German Chancellor Olaf Scholz delivered raving remarks on “climate change,” stating, “We will no longer wait for the slowest and least ambitious.”  On economic policy, Scholz declared, “Progress is not an end in itself.  Yesterday's ideas of progress can become today's and tomorrow's problems,” and he stressed that “social progress” will lead to “epochal changes.”

Among world leaders, Japanese Prime Minister Kishida Fumio spoke almost entirely about Japan’s commitment to a carbon-neutral economy, and he promised to “boldly adopt policies that have been difficult in the past,” including investment in green technology, a carbon pricing system and an emissions trading market.  In a dialogue with Klaus Schwab, Indian Prime Minister Modi also submitted to the green mantra, devoting almost all of his remarks to describing how India will move into a green “circular economy.”  A number of other heads-of-state spoke, including the Presidents of Colombia, Costa Rica, Ecuador, Guatemala and Peru, but since none of them strayed from the Davos catechism, their remarks are not worth reporting.

This brings us to Chinese President Xi Jinping, who opened the conference with the keynote speech and then engaged in a dialogue with Klaus Schwab.  Xi’s speech was reprehensible.  Despite the references to “global cooperation” and “win-win,” his remarks can only be read as a veiled attack on Donald Trump and an unambiguous endorsement of the Davos agenda.  He endorsed “holistic” environmentalism, carbon neutrality, and a “complete transition to a green economy.”  He endorsed the Trans-Pacific Partnership, praised free trade and condemned protectionism.  He expressed effusive admiration for the COP26 agenda, as well as the WTO and WHO.  Perhaps, most disgusting was his strong praise (twice in his speech) of the United Nation’s genocidal policy of “sustainable development.”

The Cult of Imperial Central Bankers

Part of the reason, perhaps the major part of the reason, is fear.  When confronted with the combined financial and economic power of the modern-day British financial empire, most nations have no defense.  The City of London, Wall Street, Brussels, and the other centers of imperial finance now possess unprecedented financial power over nation states.

In this section, however, let us look at another aspect of this, perhaps more mundane and less important, but revealing nonetheless.

In 1992 Klaus Schwab established an offshoot from the World Economic Forum, a school named Global Leaders for Tomorrow.  It was subsequently reorganized and renamed the Young Global Leaders Forum in 2004.  To be accepted as a “student” one must be under 38 years old, and there is a rigorous selection process to be admitted.  Those who are accepted serve six years of training.  As of 2021, there are more than 1,300 graduates of the school.  Among them are:

In one sense, this 30-year project could be defined as the training of an oligarchical cadre force.  In a truer light it must be seen as the creation of a cult.  Sometimes, in populist literature and videos, Klaus Schwab is portrayed as a powerful, evil mastermind, sort of an Ernst Blofeld figure.  Yes, it is true that among his 1,300 “students” many have risen to high places in key institutions:  government, finance, communications, pharmaceuticals and health care, and Silicon Valley-related digital information systems.  But, if one looks at these individuals, what is observed is a certain personality type:  ambitious and competitive, but also obsequious, obedient, and fawning—in other words morally shallow lickspittles.

These are cult followers who have memorized a set of axioms by which they will be allowed to advance in their careers.  Instead of Blofeld, or some other sinister figure, consider rather that the actual model for Klaus Schwab is the Bhagwan Shree Rajneesh, whose followers turned over their lives in order to live in his good graces.

This is what Klaus Schwab is running.  In this year’s conference, Schwab participated in most of the panels, introduced all of the major speakers and engaged in dialogues with numerous heads-of-state.  He dominated the proceedings.  Ursula von der Leyen and Janet Yellen repeatedly addressed him as “dear Klaus.”  No dissent, no debate, no disagreements.  All must obey.  This is an elitist cult of central bankers and their hangers-on.  Schwab has called his graduates “thought leaders”; yet they all speak in unison, on everything.  These are pod people who live among us, who want to kill us and replace us with others who will obey.  Perhaps, like their predecessors, they should all dress in red or orange so that it will be easy to identify them.

The crisis we now face is unprecedented.  There is no future without radical change.  No piecemeal reforms will any longer suffice.  What is required is a complete and total political and economic revolution against the global central-banking elite, against the murderous economics of empire, as is being pushed by the Davos cultists.  In the United States we are on the cusp of a legitimate political revolution, of a Lincoln-type character.  This must be accompanied by a full-fledged economic revolution.

A nation is not sovereign unless it has sovereign control of its currency, its credit system, and its economic future.  Hamilton showed how to do this with his national banking policy.  Lincoln showed how to do it with his Greenback policy.  Lyndon LaRouche always—ALWAYS—identified the system of private central banking as anathema to the U.S. Constitution and as the enemy of humanity.  Why should we let a bunch of oligarchical cultists tell us differently?  America, because of our Declaration of Independence, because of our Constitution, because of our heritage, must lead the way in this fight.

1. It is noteworthy that neither Vladimir Putin, nor any leading Russian official participated in this year’s World Economic Forum