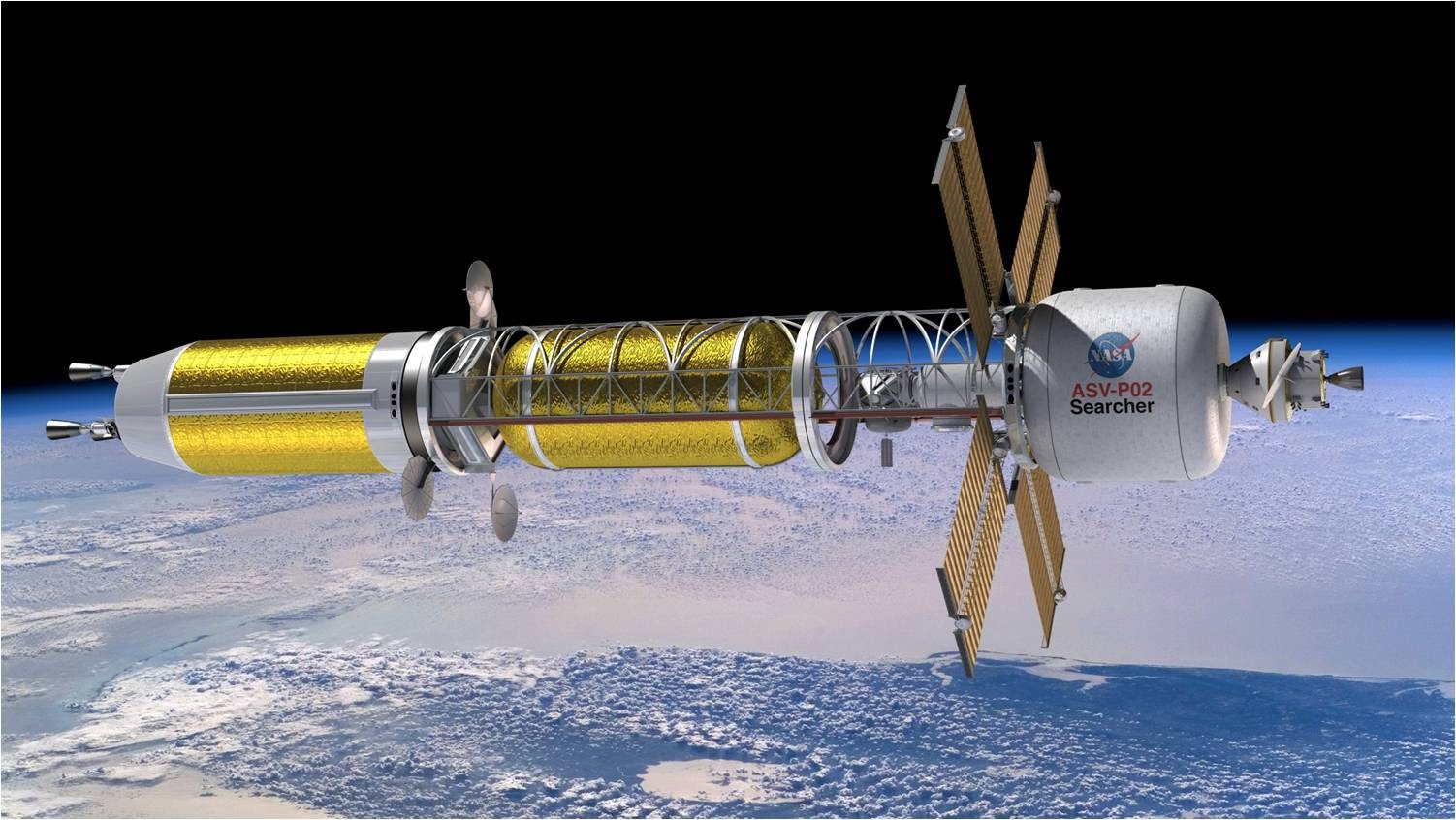 50 years behind schedule (better late than never) the United States is finally planning on putting a nuclear rocket in space. When paired with Trump's Artemis mission and the industrial development of the Moon, this represents the opening of a new era in the space age—the expansion of a new infrastructure "platform" integrating the physical-economic spacetime of the Earth-Moon system.

This is the kind of future we need to be fighting for. This is the alternative to Mussolini Joe's woke corporate fascism and their Green New Deal (hidden under the disguise of a "jobs plan").

According to an April 12 release from the Defense Advanced Research Projects Agency, "DARPA has awarded contracts for the first phase of the Demonstration Rocket for Agile Cislunar Operations (DRACO) program. The goal of the DRACO program is to demonstrate a nuclear thermal propulsion (NTP) system above low Earth orbit in 2025. The three prime contractors are General Atomics, Blue Origin, and Lockheed Martin."

Well before the Apollo program, NASA and the Atomic Energy Commission were already working on nuclear rocket technology—clearly recognizing nuclear power as the necessary next step in space travel, breaking from the limitations of chemical propulsion. Major advances were made by the Project Rover program at Los Alamos National Laboratory from 1955 through 1972, and by the Nuclear Engine for Rocket Vehicle Application (NERVA) program from 1961 to 1973.

The principle underlying the superiority of nuclear rockets is the energy density of the fuel—with nuclear fuel containing about one million times more energy per weight over any chemical fuel. With a nuclear gas-tank containing a million times the energy (relative to the same weight), all that's needed is a propellant, something to run through the nuclear reactor, heat up, and get pushed out the back for thrust. Since the nuclear reactor provides the energy/heat, the propellant can be the lightest gas available, hydrogen.

By the late 1960s, the NERVA rocket was getting very close to operational, and NASA had big plans. As reported in a Los Alamos history on nuclear rockets,

"NASA's plans for NERVA included a visit to Mars in 1979 and a permanent lunar base by 1981. NERVA rockets would be used for nuclear 'tugs' designed to take payloads from low-Earth orbit to higher, larger orbits as a component of the later-named Space Transportation System. The NERVA rocket would also be used as a nuclear-powered upper-stage component for the Saturn rocket (a chemical-based rocket), which would enable the upgraded Saturn engine to launch much larger payloads (up to 340,000 pounds) to low-Earth orbit."

However, in the early 1970s our nuclear rocket programs were cancelled, along with the Apollo program, and our commitment to the future.  Now, 50 years later, between President Trump's Artemis mission and nuclear rocket technology, we've finally got a perspective to get back on track.  While the DARPA program focuses on fulfilling Department of Defense objectives of enabling "rapid maneuver in the space domain," the core technology is not limited to defense.  When asked about applications to manned space flight, DARPA's public affairs responded,

"Yes, it's directly applicable to manned space flight. Conceptually speaking, the nuclear thermal rocket (NTR) being developed under DRACO is almost the same type of NTR engine that NASA will most likely be working on for their manned Mars mission. Both agencies are pursuing HALEU, solid core NTR reactors that utilize cryogenic hydrogen propellant."

When paired with the industrial development of the Moon (as outlined by space visionaries like Krafft Ehricke and Lyndon LaRouche), the Moon would become another source of hydrogen.  With a nuclear gas-tank, the rocket's source of energy/heat would be available for years, only requiring refilling of the hydrogen propellant—meaning the same nuclear rockets can travel back and forth between Earth, the Moon, and various orbits, akin to regular air travel between major cities.

This would revolutionize mankind's economic relation to the entirety of the Earth-Moon system.  When the right revolutions in technology and infrastructure are properly applied, they define qualitative break points, or phase shifts, opening up entirely new domains of potential.  This has been the history of human economic advance, and is what's needed now for the US and global economy now.

As Lyndon LaRouche wrote in his April 2010 paper, What Your Accountant Never Understood: The Secret Economy,

"Always, such progress depends upon mankind's increased power through the effects of what may be generally defined as needed increases in the energy-flux-density of the resources of applied, human-controlled power, as has been the case beginning with the discovery of improved forms of fire, such as the mandatory standard of nuclear-fission and thermonuclear fusion today, together with the progress of astronomy in the direction of man's exploration and prospective colonization in our planet's nearby space.

"So, as we develop the means for satisfaction of those production requirements on the Moon which are needed to prepare mankind's escape to other planets and star-systems of our galaxy, from the present, prison-like bounds of Earthly habitation, we must include the need to meet the challenge of lower-ranking fields of gravitation, and the challenge of acceleration-deceleration in interplanetary flight to, and residence on Mars. Thus, we must do for interplanetary Solar space, what the great ocean-going mariners of the last great period of glaciation did in discovering astronomy as a practiced science, together with what Charlemagne did for the development of inland economy in Europe, with what we did in our initial development of the territory of North America, what we did in launching the concepts of transcontinental railway transport in North America, and with what must now be done in our commitment to a virtually continuous global system of transport and related infrastructure, beginning with the development of the Bering Strait railway tunnel. Thence, we must now go on to development of our Moon, and, thence, to conquer the mysteries of transport through the larger domain of cosmic radiation, as for transport to and from and habitation on Mars."