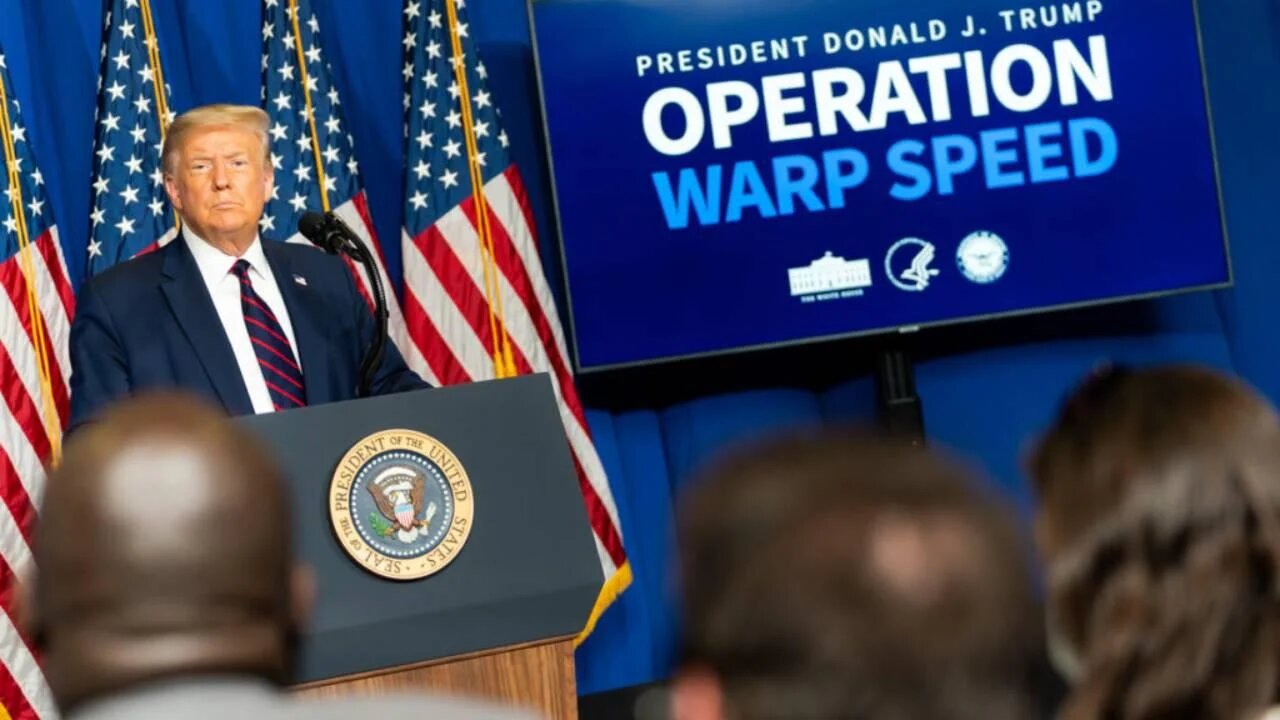 Donald Trump is still President of the United States. Yesterday, Friday, in the White House Rose Garden he proved it again, presenting to the American people the ongoing success of our nation’s effort to crush the pandemic. Watch the press conference, or read the remarks.

This article is a summary of the full press conference which every American should view and read about because there is a full scale information war underway to debunk its significance and to stigmatize and disorient those for whom this vaccine will prove life-saving.

The President was joined by the co-leaders of Operation Warp Speed, Dr. Moncef Slaoui and General Gustave F. Perna, as well as Health and Human Services Secretary Alex Azar, and Vice President Pence, to provide a status report on the extraordinary success of Operation Warp Speed and the “all of nation” mobilization to develop a vaccine and deploy one or more vaccines.

The first 20 million vaccine doses are expected to be available this coming month, in December, beginning with those most vulnerable: seniors all across this country, healthcare workers, and first responders at the point of the need. The President opened by stating: “In the past nine months, my administration has initiated the single greatest mobilization in U.S. history — pioneering, developing, and manufacturing therapies and vaccines in record time. Numbers like nobody has seen before. No medical breakthrough of this scope and magnitude has ever been achieved this rapidly, this quickly. And we’re very proud of it, and I had tremendous help from the military — generals, admirals — and many of the great people at the White House. . . Operation Warp Speed is unequaled and unrivaled anywhere in the world, and leaders of other countries have called me to congratulate us on what we’ve been able to do, and we’ve helped many countries with their ventilators and all of the problems they were having.”

The President’s far-reaching “Operation Warp Speed,” was brought into being on May 15th to coordinate a“ whole-of-government, whole-of-America response to beat COVID-19." At the time the stated intent was to deliver initial vaccine doses by January 2021. Like most crash scientific programs, as envisioned by the great economist Lyndon LaRouche, the combination of a government directed mission orientation and seed funding and the freeing of the private sector from red tape and risk, has resulted in Warp Speed coming in ahead of schedule.

President Trump and his Team cut through radical free market ideology and technocrats and “de-risked” the vaccine development process. Working with his assembled task force of medical specialists, and drawing on the deep experience of the US military in bio-warfare and global logistics, Warp Speed crafted “one of the most ambitious scientific endeavors in modern U.S. history,” in the President’s words. Similar efforts were undertaken by the Trump Administration to create a supply chain for PPE and ventilators to confront the virus – a supply chain which had literally been shipped overseas prior to Warp Speed.

In his remarks, the President also made clear that “this administration will not go, under any circumstances, to a lockdown . . . The cure cannot be — you got to remember — cannot be worse than the problem itself. . . when you look at what happens during a lockdown — I just say it very loudly — it’s horrible what happens with drugs, alcohol, depression, loss of jobs, business closures. It’s a terrible thing. So this administration will not go, under any circumstances — will not go to a lockdown, but we’ll be very vigilant, very careful. We understand the disease. It’s a — it’s a complicated disease, but we understand it very well.”

“As soon as April, the vaccine will be available to the entire general population,” the President said. Pfizer Laboratories announced earlier this week that its trials show its COVID-19 vaccine is "more than 90% effective," -- higher than experts had expected. The pharmaceutical company said it would soon be applying for Emergency Use Authorization from the Food and Drug Administration.

President Trump and Dr. Slaoui outlined the portfolio of six vaccines, using three different platform technologies, that Operation Warp Speed selected for maximum support. At this moment, it is the platform called “messenger RNA,” that has advanced most rapidly, with one vaccine by Pfizer and one by Moderna. The second platform is using what are called “live viral vectors,” and the third platform is the “recombinant protein platform.” Potentially two vaccines and two therapeutics may be granted an emergency use authorization before the end of this year.

“I think it’s a remarkable achievement within a period of six to seven months,” Dr Slaoui noted. Dr. Slaoui was pointed in his remarks, regarding the scientific rigor of Operation Warp Speed’s vaccine and therapeutic efforts and its vital role. “It is important to know that this progress has been achieved without any political interference. I said it many times. And every step has been and is being judged by independent expert bodies, and, if approved, should be used by all in the population. Because I believe vaccination is likely to be the cornerstone among all the other measures that we have to take to help us really control this pandemic.”

General Perna, a United States Army four-star general now serving as the chief operating officer of Operation Warp Speed, was introduced by Dr. Slaoui to report on the support that Operation Warp Speed has provided to the manufacturing of the vaccines and also to their distribution. General Perna, said in part, “Through the whole-of-America approach, we have leveraged the best of nation in federal government, local, states, industry, and academia to expand the capacity and capability to achieve our mission. . . We have capitalized on the best contracting, logistics, and planning experts available to synchronize and integrate all phases of the operation, from development of the vaccine, manufacturing of the vaccine, and finally distribution of the vaccine. Six months ago, the capacity did not exist in our nation’s pharmaceutical production base. We went to work building brick and mortar manufacturing facilities, bringing in the right specialized machinery, and prioritizing supply-chain materials through the Defense Production Act. Today, we expect to have tens of millions of doses immediately following EUA [Emergency Use Authorization], and we will distribute them as soon as the FDA applies the EUA. We will do that within 24 hours of the EUA. We are harnessing the strength of commercial industry and the existing vaccine delivery capabilities and infrastructure. Our nation deserves this. Vaccines will be allocated pro rata by population so that we ensure fair and equitable across...I will end where I started: This is about saving lives, the lives of the great American people. And we will not rest until we are successful and that we have irreversible momentum to returning our nation back to normal. Thank you, Mr. President.”

Secretary of DHHS Alex Azar thanked the President, and highlighted, “Three of the remarkable accomplishments we see just this week: First, Pfizer announced very promising data on its vaccine candidate. Second, ... the FDA authorized and we have begun to distribute and administer Eli Lilly’s monoclonal antibody to help Americans at risk for serious disease stay out of the hospital. Third, another vaccine company, Moderna, announced that it has reached a critical clinical trial milestone, meaning we may see data from them within days.”

Vice President Pence concluded by announcing that the White House Coronavirus Task Force would be meeting with the nation’s governors through their regular conference call this Monday. Besides reviewing the progress on the development of a vaccine, and OWP plans for distribution, they will be reviewing each and every state’s specific plans for distributing the vaccine, to ensure that the entire country is prepared and ready for immediate implementation. One of those governors, New York Governor Andrew Cuomo says he will not allow the vaccine to be distributed in New York until a panel he has appointed reviews it.

Cuomo, whose own reckless decisions during COVID sent thousands to their deaths, is a leading proponent of the Great Reset/Green New Deal, through which the world’s central bankers hope to use the continuing COVID epidemic to “cull the herd’ by brutally cutting energy sources, controlling credit in order to continue a controlled economic devolution, while brainwashing generations of youth to accept all of this as necessary based on the myth of impending catastrophic climate change.