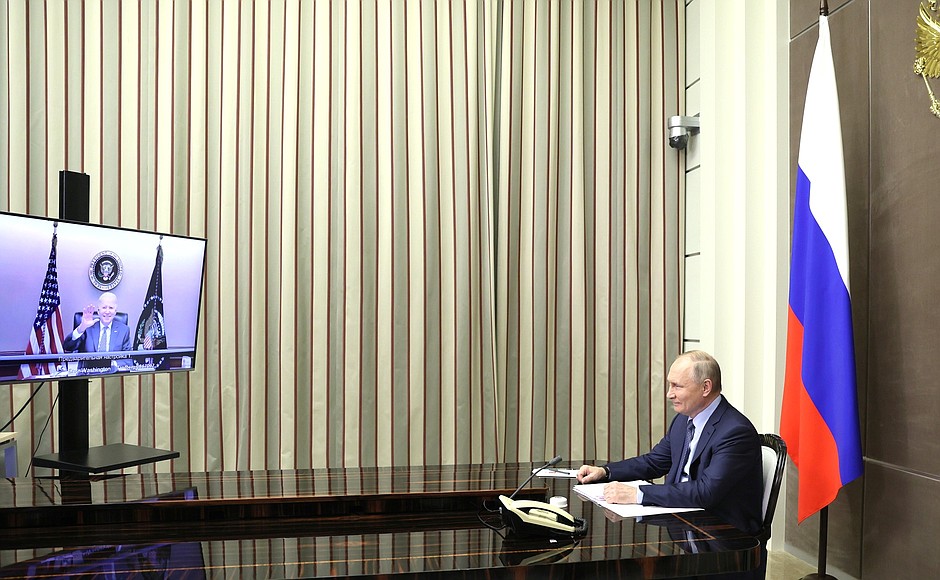 Russian President Putin and US President Biden during a videoconference. December 7, 2021 photo: en.kremlin.ru

The entire Republican Party in Washington, except for Senator Rand Paul, has gone completely insane on the issue of war and peace. Not that they weren’t there before, but this outbreak is particularly egregious. They join Democrats who currently inhabit the State Department, CIA, NSA, DIA, the Pentagon, the National Endowment for Democracy, and the rest of the intelligence establishment and supporting defense and intelligence contractors--a/k/a the Deep State, the National Security State, the Military-Industrial Complex, or however you want to characterize this noxious, poisonous Borg. It was erected following the death of Franklin Roosevelt, turning the United States into the world’s gendarme on behalf of international financial interests located primarily in the Modern British Empire. Long-term bipartisan members of the “Washington consensus” include Joe Biden and the intellectual sock-puppets who surround him in his National Security Council. While eating up our national resources and generations of youth in “endless” regime change wars against any nationalist leader we deem hostile to the interests of the British Empire, the very same forces have turned the American economy into a post-industrial scrapheap, outsourcing our manufacturing and advanced industries for purposes of their own financial gain.

Almost all of the commentators on Fox News have worked themselves into a rabid fit over the past 24-48 hours, first hyping a non-existent Russian threat to “invade Ukraine” next January or February, and then declaiming against the senile occupant of the White House for taking the use of U.S. troops to defend Ukraine’s “democracy” off the table in his discussion with Vladimir Putin on Tuesday. Amongst the bombastic idiots, Senators Lindsay Graham and Ted Cruz are leading the charge, complemented by by Dick Cheney protégé Michael Waltz (R-Fla) from the House. They call Biden an “appeaser” for not imposing drastic measures on Russia for what they claim is a massing of troops near Russia’s border, within Russian territory. They are also demanding that at least Joe Biden stop the deployment of the Nord Steam 2 Pipeline, the construction of which has been completed and which is now scheduled to provide natural gas to Germany and the rest of Europe this winter. As opposed to the portrayal in our press, it is a joint Russian-European project which is a technological marvel. You can read about its actual history here. This efficient pipeline bypasses the current unstable Ukraine transit route, which now provides a financial stream to Ukraine’s corrupt oligarchs in an otherwise impoverished post-coup economy. The pipedream of killing Nord Steam 2 and providing exclusively American natural gas to Ukraine and Europe by tanker, is the central feature of numerous lobbying and public relations campaigns in Washington, D.C. Mucho bucks have gone to both sides of the aisle in Congress in pursuit of this objective. It was also at the center of Hunter Biden’s corrupt Ukrainian consulting for the Burisma gas and oil firm.

The insanity reached a fever pitch on Monday, when Senator Roger Wicker (R-Miss) suggested using nuclear weapons to defend Ukraine. Tulsi Gabbard correctly characterized Wicker’s comments as those of someone who is “insane” a “sociopath,” or a “sadist” in a Wednesday appearance on Tucker Carson Tonight.

Tucker himself came out strongly against the Potomac war fever in his Tuesday show, featuring both his monologue and an interview with Colonel Douglas Macgregor, a critical military advisor to President Trump. If you haven’t watched it yet, it is essential viewing. Col. Macgregor pointed out that the United States has no national security interest in Ukraine. Additionally, Russia has no interest in actually “invading Ukraine.”  He also noted that it has been demonstrated repeatedly, by the Pentagon itself in its military exercises, that there is no chance that the United States or NATO would win a conventional conflict over Ukraine with Russia. For the more delusional in our defense and security establishment however, that means exploring possible first use of nuclear weapons, exactly what Senator Wicker blurted out. You can watch this here.

All that Putin is asking is for some form of reassurance that Ukraine not become part of NATO and be loaded up with advanced weaponry by which to continuously harass Russia on its borders. He is also seeking, through the longstanding Minsk Accords, negotiated between France, Germany, Russia, and Ukraine, a settlement to the frozen conflict in the Donbass. This is the historically Russian ethnic enclave in eastern Ukraine which has been under continuous attack by the Ukraine military and its outright Nazi components ever since the United States and NATO collaborated to overthrow Ukraine’s democratically elected government in 2014. Carl Gershman, then head of the National Endowment for Democracy, signaled the decision to conduct a coup in Ukraine in a 2013 keystone article in the Washington Post. He said Ukraine was the “prize” to be had in the ultimate overthrow of Vladimir Putin as the head of the Russian state. As opposed to the lie that Russia will invade Ukraine in January or February, the more likely scenario involves Ukrainian atrocities against the citizens of the Donbass aimed at drawing Russia into a conflict.

One aspect of Putin’s concerns involves the massive NATO exercises which have occurred on Russia’s borders continuously in 2021. Larry Johnson highlights these in a piece on Pat Lang’s blog published Thursday. READING THIS, YOU SHOULD RECOGNIZE JUST WHO IS TRYING TO PROVOKE WAR HERE. IT CERTAINLY ISN’T RUSSIA. As William Arkin has documented in his book, The Generals Have No Clothes, these huge exercises function on automatic pilot, without any control by the President of the United States, or accurate assessments of current strategic tensions.

As we have emphasized in our coverage (here and here), a major aspect, if not the major objective, of this war drive involving not just Ukraine but also Taiwan, involves re-empowering the Republican Washington establishment while disorienting Donald Trump’s MAGA movement --subverting Donald Trump’s central pledge to end forever wars.

What is not properly emphasized almost anywhere, is the simple fact that the Ukrainian military, to which Washington’s Republicans and Biden give “iron clad” guarantees, is dominated by neo-Nazis. Victoria Nuland, now issuing mandates for war from her position in the State Department, along with the NED and John McCain, engineered the post-coup Ukraine government. Joe Biden and his crew know all about their embrace of the Nazis. The Republicans in Congress knew this and embrace them also. Joe Biden served as the Obama Administration’s post-coup viceroy of what has become a completely impoverished vassal state since the coup. NATO and our Washington consensus elevated this Nazi formation, dedicated to the legacy of the World War II butcher, British agent, and Nazi collaborator Stepan Bandera, to wage terror on the citizens of the Donbass following the coup. This simple fact amplifies what Tulsi Gabbard is pointing to. The people who are promoting this war are truly sociopaths, the type of sadists who deserve to be evaluated as war criminals rather than representatives of the American people. In addition to the coverage we provided throughout the events of 2014 forward, the articles of the late Bob Perry concerning this are required reading. Reading these pieces from 2014 and 2015, shows the continuity of this insanity from that point through today. While the U.S. Congress tried to put lipstick on this pig by denying direct U.S. aid to the most famous of these Nazi battalions, the Azov Battalion, that job was actually outsourced to Canada.

So, this is the context for the farcical “Democracy Summit” which the Biden collective is promoting as the antidote to “authoritarian autocrats” of Russia, China, and Iran. It convened today and runs through Friday. This from a United States which has imprisoned people prior to trial, who merely walked through the Capitol on January 6th, protesting a rigged and stolen presidential election--while covering up the murders of two unarmed protesters, Ashli Babbitt and Roseann Boyland. This from a nation where the majority of the media have just been exposed meeting with the White House in an all-out attempt to shape positive coverage of the President’s globalist Green economic agenda and rescue Biden’s sinking poll numbers, in only the most recent round of surveillance-state censorship. This from an establishment which is imposing destructive vaccine mandates, even though three federal courts have now deemed them unconstitutional and illegal. This as illegal immigrants and deadly poisonous drugs flow over an open southern border in a modern slave trade run through the Mexican drug cartels, while U.S. citizens die in record numbers from a completely unaddressed national addiction crisis. This as our cities experience record levels of violence as the result of deliberate policies. This as our children are poisoned by their teachers to become transgender narcissists and racial segregationists.

The solution lies with you, dear reader: in your self-conscious recognition that we are many and they are few. Just “resisting,” viewing yourself as an angry “underling,” is not going to cut it. You must prepare yourself to help us take political power permanently away from this imperial satanic formation out to destroy our Republic. First by mobilizing against this war drive and understanding the real enemy. Then by sending the Republican traitors and the insane Democrats in the Congress back home in 2022. And then re-electing President Trump in 2024, with a full cabinet of loyal Americans bent on finally re-Americanizing the United States.