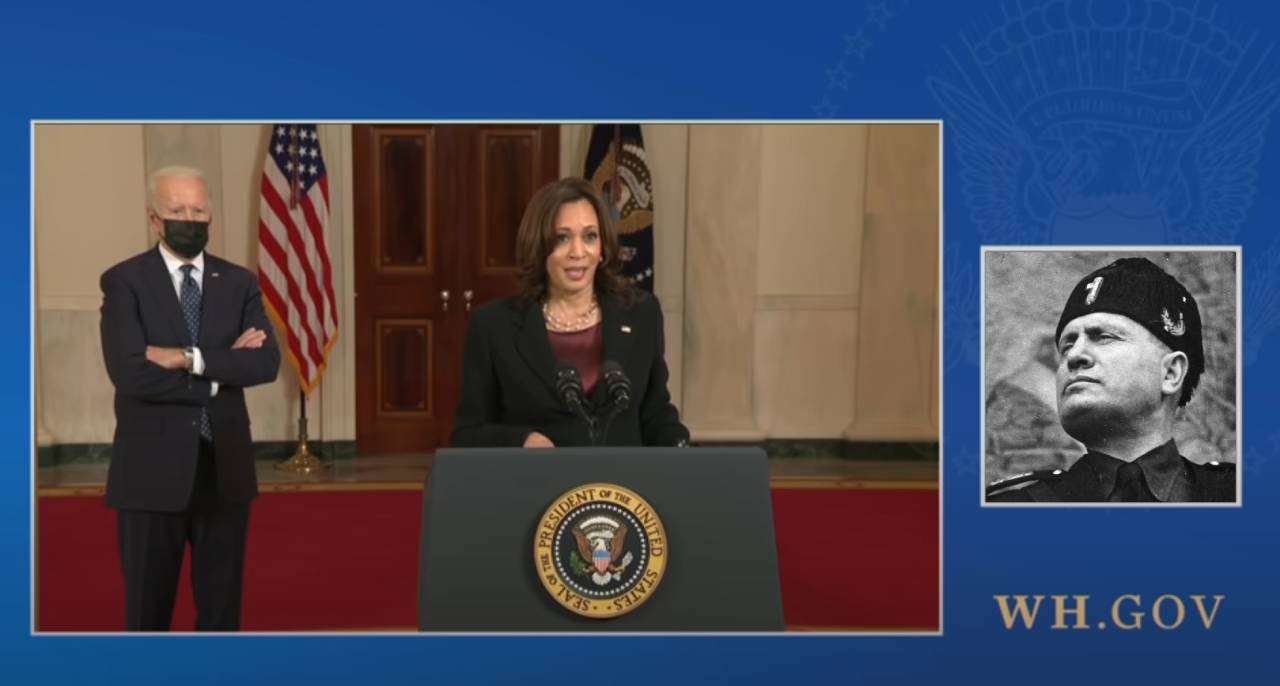 There is no doubt Derek Chauvin committed a crime when he killed George Floyd and he deserves a just punishment for that crime. Anyone connected to the Internet or a cable television on the face of the earth has probably seen Chauvin’s killing of George Floyd on May 25, 2020. According to other complaints against Chauvin which were excluded from his trial, Chauvin had a history with questionable uses of force.

But Joe Biden’s new found devotion to the 1619 Project’s fabricated American history and Critical Race Theory, and Nancy Pelosi’s claim that George Floyd somehow chose to be martyred on behalf of her view of racial equity–beliefs which magically appeared shortly after Floyd’s death and drove last year’s summer of violence for electoral advantage–turned what might have been a just verdict in this case into a gross offense against our Constitutional republic itself.

The Obama/Biden/Pelosi agitprop use of George Floyd since his death has been a ringing endorsement of violent mob rule, first for deposing President Donald Trump, and now in a broad attempt to critically destabilize and attack this country’s institutions and erase its actual history. As in all Jacobin movements, the paymasters are the elites who also guide the political action. Such was the case with Mussolini’s black shirts, Hitler’s brownshirts, or the Duke of Orleans and George Danton’s paid sans-culottes in the French Revolution. But the Washington Republican establishment’s response to this, to date, has been to play the reverse identity politics card, claiming, absurdly, that there is no racism in our society, that China is somehow steering all of this, and that the economic nostrums of neo-liberalism will solve the problem.

Chauvin’s trial, amidst against this backdrop, resembled one of those scenes in old Western movies where the lynch mob is at the door of the jail. Except this time, there was no hero sheriff to intervene. A jury, instructed that they would remain anonymous because of threats against their lives, but not sequestered by the judge, was instructed concerning the “right” result by rioters, by the media who were already seeking to reveal their identities, by preachers, spurred on by the FBI’s very own Al Sharpton, telling their congregations that Minneapolis should burn if the “right” result was not reached, by Mad Maxine Waters, and, finally, by the current illicit occupant of the White House. Defense witness Barry Brodd’s former home was hit with a pig’s head and pig’s blood in a widely publicized incident.

According to Black Lives’ Matter, the guilty verdicts on all three counts were proof that violence was necessary to secure Chauvin’s conviction because otherwise, what everyone saw, in that horrific 9 minutes, might somehow be forgotten. Just this week, one of the founders of BLM, Patrice Khan-Cullors argued that while an avowed Marxist, she could indulge in buying no less than three multi-million dollar houses because it helped black families: namely, her own. Michelle Obama instructs us about white privilege from the Obama’s multimillion dollar estate on Martha’s Vineyard. Hollywood is plugging films with the theme that white people and white cops are out to kill all black and brown people, pouring gasoline on a situation already ripe for overreaction.

This fake movement for “justice” is taking place while the nation’s ghettos are being flooded with drugs and gang murders --very little of this human slaughter attributable to violence by cop, none of it making headlines. The nation’s underclass is not being educated in our schools. Instead, they are undergoing a form of menticide, using “culturally appropriate” dumbed-down language, while its teachers declare that math is “racist.” The future being prepared for these children will consist of being a permanent member of a compliant low wage underclass who can be mobilized for the occasional privilege of burning down buildings or looting the local Nike store.

Critical race theory, in fact, celebrates poverty and lack of education, finding the rage, frustration, and malleability which results politically useful, and worthy of emulation by our young. Looting and arson are now declared “just forms” of reparations as George Soros’ friends move to decriminalize drugs and all forms of crime, while flooding the nation with undocumented immigrants who will compete in this economy’s savage low wage arena. Meanwhile, the inflation and cuts in the actual physical growth of the economy dictated by Mussolini Joe and the Federal Reserve, guarantee that the fixed $15 minimum wage handout being offered by the Democrats will serve the same enslaving purpose as the immigrant’s indenture to the cartels who brought him here.

There is only one answer to this as both Martin Luther King and Lyndon LaRouche argued. It is a genuine economic mobilization to rebuild this nation’s economy on a modern platform while educating every class in our society in the science and technology inherent in space exploration. That is the American System of political economy, founded by Hamilton, used by Lincoln to win the Civil War, and mobilized by Roosevelt to win the second World War. Katherine Johnson, the African American mathematician who helped put mankind on the Moon should be our icon, not Lebron James. The fascist oligarchs currently running Mussolini Biden are the actual sponsors of the current attack on our nation --that attack being carried forward under the banner of the globalist Green New Deal. They aim to strip the country of access to modern forms of energy. They want us to return to feudal forms of social and economic organization which they can control. To implement that, they require a stupid and mentally compliant population.

Martin Luther King was assassinated when he turned his movement toward confronting economic injustice on behalf of the working poor of all races. The current race baiters, on the right and on the left, hate Dr. King’s message. Their money is made, their status and power secured, from permanent race based turmoil. In his famous speech at SMU University on March 17, 1966, Dr. King reviewed this shift in emphasis.

“There is nothing more dangerous than to build a society with a large segment of people in that society who feel they have no stake in it, who feel they have nothing to do. These are the people who will riot. And in spite of the pleas for nonviolence, they often fall on deaf ears out of the frustrations of poverty, out of the frustrations of being left on the periphery of life, pushed out of the main stream of life. . .”

In that speech, Dr. King asserted that non-violent political action governed by the principle of Christian love amidst a genuine economic revival was the means to righting the nation’s ship, just as Lincoln before him. Dr. King said:

“Agape is more than romantic or aesthetic love. Agape is more than friendship. Agape is understanding, creative, redemptive goodwill for all men. Theologians would say that it is an overflowing love that is the love of God operating in the human heart. When one rises to love on this level, he loves every man not because he likes him, not because his ways appeal to him, but because God loves him and he rises to the level of loving the person who does the evil deed by hating the deed the person does. I think this is what Jesus meant when he said love your enemies. And I’m so happy he didn’t say like your enemies. I must confess that there are some people that it is pretty difficult to like. But Jesus said love them and love is greater than like. Love is understanding creative goodwill for all men. When you stand up against the evil system and yet understand the perpetrator of that evil system.”

“And so you, out of love, stand up because you want to redeem him and the object is never to annihilate your opponent but to convert him and bring him to that brighter day when he can stand up and see that all men are brothers. . . This is what the non-violent method says at its best. It has brought us a long, long way and it will help those of us who have been on the oppressed end of the old order to go into the new order with the right attitude. Not with bitterness, not with the desire to retaliate, not with the desire to get even with those who inflicted injustice upon us all of these years, but with a desire to forgive and forget and move on to a moral balance. We will not seek to substitute one tyranny for another, thereby subverting justice. . . This is why I say that a doctrine of black supremacy is as dangerous as a doctrine of white supremacy. God is not interested merely in the freedom of black men and brown men and yellow men, but God is interested in the freedom of the whole human race and the creation of a society where all men will live together as brothers. And every man will respect the dignity and worth of human personality. And so that is the need to stand up, that is the need for all people of goodwill in this nation to become involved participants.”

It is nothing less than Dr. King’s “agape” which is the target of our deranged elites, their cancel culture, and the Mussolini collective presently occupying the White House.