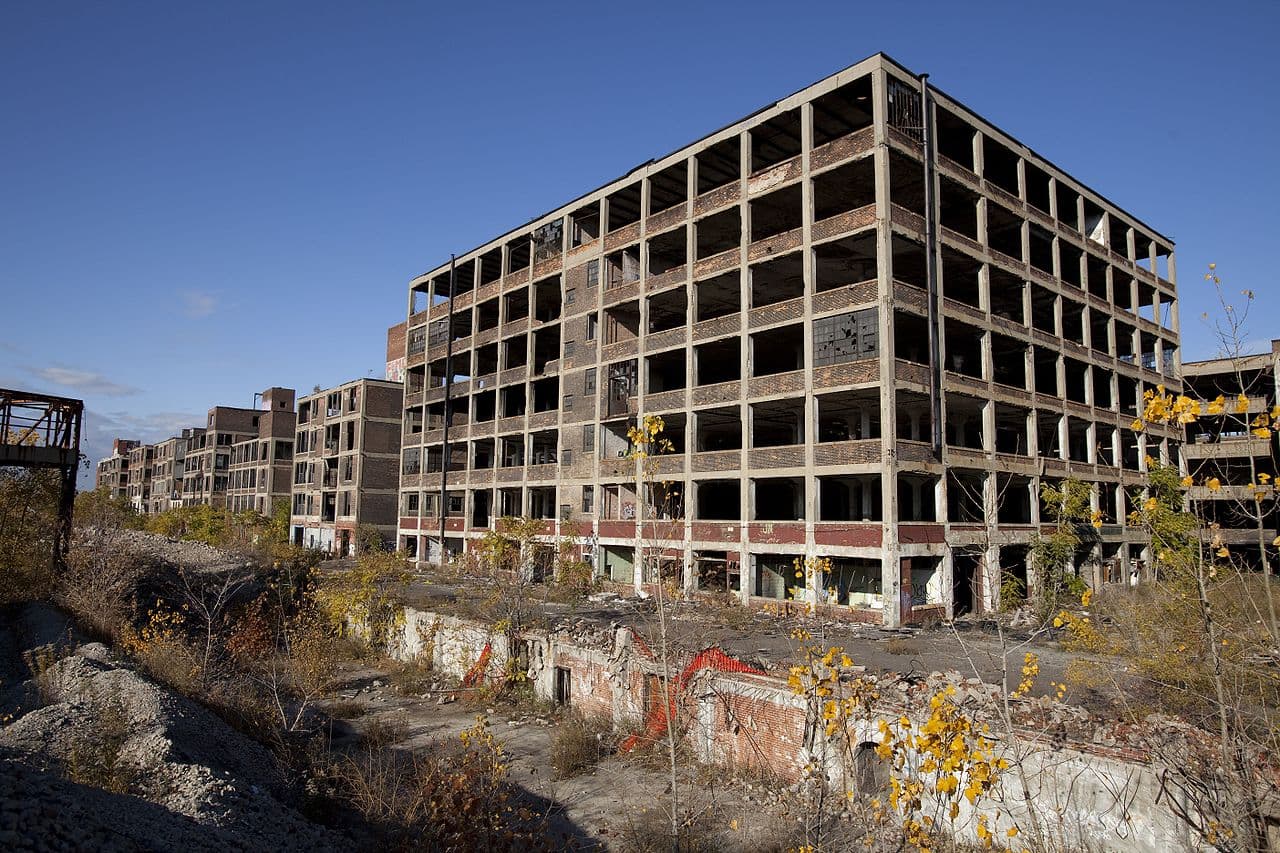 This article is the sixth in our new campaign, "The Decisive Battle in the War for the Republic, Put the Fed Into Bankruptcy; Create the Third National Bank."

The economic destruction of our once-productive nation and the murderous attack on the livelihoods of the American people might seem at first glance as practical problems, i.e., How can we reverse this?  What steps, what measures, must be taken to begin to rebuild our economic health?

These are legitimate questions, but before we proceed to “What is to Be Done?”, it is critical to fully comprehend “How We Got Here.”   How did we go from the most productive nation in human history to the disaster we confront today?  Who did this to us?  Answering that question will greatly aid in pointing us toward legitimate solutions.  At the heart of the problem is the continuing existence of the un-Constitutional succubus known as the Federal Reserve.

The 109-year history of the Federal Reserve is a very sordid story.  But more to the point is the crisis we face today.  Since the financial melt-down of 2007-2008, the Federal Reserve has pursued lunatic monetary and financial policies, all desperately aimed at propping-up a staggering, speculative financial bubble and protecting the mega-banks and other parasitical financial institutions at all costs.  The incessant bail-outs, bail-ins, quantitative easing, and most recently, the unprecedented monetization of U.S. Government debt under Joe Biden, has all been done for the sole purpose of perpetuating rule by the private financial oligarchy; and it has all been accomplished through a vicious attack on the productive economy and the American people.

If we desire to survive and prosper, to once again possess a truly productive economy, the Federal Reserve must go!

The first thing to understand about the Federal Reserve is that it is not simply a single institution.  It is part of a global system of private Central Banks, which now exist in almost every nation on the planet.  These banks are privately owned and operated on behalf of private banking and oligarchical financial interests.  These institutions have usurped the role which legitimately belongs to sovereign government.  They issue (legal tender) currency, set interest rates, control the money supply, provide huge amounts of money to the major banks, and in some cases act as the “lender of last resort.”  These central bankers have imposed on us a global regime of usury and financial speculation.  Many within elite circles boast about the “independence” of these institutions.  But think about that for a moment.  The United States is a Republic; it was created as a government of “We the People.”  In such a Republic, should not We, the People, through our Constitutionally-elected representatives, determine the economic destiny of our nation?  Is it Constitutional—or even rational—that life-and-death economic and financial decision-making be handed over to un-elected frontmen for the private financial oligarchy?

This global central banking system is violently hostile to the principles of the American Declaration of Independence.  It is the view of these financial oligarchs that they run the world.  National sovereignty is an obstacle to their designs.  This is the dirty secret behind the “democracy” of George Soros’ Open Society.  According to Soros and his oligarchical allies, all nations must submit to the interests of the central bankers, the speculators and the thieves.

The global central banking system is not something which stretches back eons into human history.  It is a modern creation, established primarily in the latter half of the 19th century and first decades of the 20th century.  Given that the record of human economic development goes back more than a million years, the life span of central banking represents merely a blip, an aberration in the span of human history.  It is best viewed as a cancerous tumor—one which should now be excised for the good of humanity.

The millennia-long advancement of the human species has always been driven by what Abraham Lincoln identified as “Discoveries and Inventions.”  This is what both Gottfried Leibniz and Lyndon LaRouche call “physical economics,” i.e., that all human advancement is a product of human-directed advances in science, technology, manufacturing and modern agriculture.  Contrary to this record of upward human progress, the 19th century British Empire imposed a “money system,” a usurious financial system absolutely hostile both to national sovereignty and to continued human advancement.

The creation of the system of global central banking occurred in three stages:

By the mid-19th century, every advanced nation was compelled to join, or abide by, the monetary restrictions and obligations of the British gold standard.  If nations refused, they would be cut-off from any access to the financial markets of London, Amsterdam, and Paris, find it impossible to conduct banking or world trade, and probably face “friendly persuasion” from the gunboats of the British Royal Navy.

When Abraham Lincoln declared independence from the gold standard by issuing sovereign greenback currency and launching the greatest industrial and technological revolution in history, the financial oligarchy counter-attacked by establishing a global network of institutions to force every nation to submit to the economic and monetary diktats of London.  This would become the central banking system.

At first, the central banking system was created almost exclusively in two locations—the European continent, and the colonies of the British Empire.  Central banks, modeled explicitly on the Bank of England, were created in Germany (founded 1875; strengthened 1909), Japan (1883), Italy (1893), Sweden (1893), Switzerland (1905), Denmark (1908), and other nations.  In 1913 the United States joined the central banking system with the creation of the Federal Reserve.  After World War I, the British Empire next imposed central banks on the new nations created by the Versailles Treaty:  Austria (1923), Hungary (1924), and Czechoslovakia (1926).  During this same time period, almost all major British colonies and dominions, including Australia, New Zealand, India, Ireland, and Canada all established central banks.  In addition, other British-dominated central banks were established in non-Empire countries, including Brazil, Persia and Egypt.

It is important to remind the reader here that these “central banks” were all PRIVATE banks, owned and controlled by the richest and most powerful members of the financial oligarchy.  Yet they were granted near-absolute power over the monetary and financial affairs of their respective nations.  Nothing like this had ever before existed in human history.  Never!  During the Middle Ages, European private bankers would often loan money to sovereign rulers, but they had no means to compel the kings or queens to pay, and sometimes kings would repudiate their debt.  With an empire of private central banking, the financial oligarchy could now impose their will on nation-states and dictate policy.  And all of this transpired while the central bankers maintained an incestuous relationship with the world’s largest banking houses in London, Paris, New York, and elsewhere.  This is, as it was once called, an imperial “Money Trust.”  It is the bankers who now call the shots.

Finally, it must be repeated that this global system of private central banking is a completely modern creation.  Almost all of the institutions mentioned above were established in a 55 year period from 1876 to 1931.  The global central banking system is not an axiomatic pre-existing feature of human culture. It was created by the financial oligarchy, and it has now reached the end of its life-span.

On June 4, 1963, President John F. Kennedy signed Executive Order 11110, which stripped the Federal Reserve of its power to loan money to the United States Federal Government at interest.  This Order also authorized the U.S. Treasury to directly issue United States Notes in $10 and $20 denominations backed by gold.  During the next few months, these Treasury notes were printed and circulated, but then they were all withdrawn after Kennedy was assassinated.  This was the last attempt by a U.S. President to reassert national economic sovereignty and break free from the Federal Reserve and the central banking system.

Less than eight years after Kennedy’s murder, in 1971, the United States abolished the Bretton Woods monetary system, ushering in fifty years of economic destruction and financial speculation.  Beginning in the 1980s, and continuing until today, we have witnessed an unprecedented power-grab by the private bankers.  The most egregious example of this has been in Europe, where once-proud nations have become little more than vassals of the European Central Bank, created in 1998 by virtue of the Maastricht Treaty.  Throughout the world the pattern is the same, as national economic sovereignty is eliminated and the people are ground into the dust.

The financial lunacies of the 1980s brought us junk finance and the stock market crash of 1987.  Margaret Thatcher’s 1986 “Big Bang” financial deregulation of the City of London was both a coup designed to make London once again the controller of world finance and, at the same time, a British declaration of war against the sovereignty of all nation states.  The immediate result was the 1987-2007 era of wild financial speculation, the explosive growth of the unregulated offshore banking havens, and savage attacks on physical economic production, all culminating in the crisis of 2007-2008.

Since 2008, the policies of the Federal Reserve, the other central banks, the Davos crowd, and the British monarchy have driven nations toward their doom.  Money is being printed like crazy—not to build anything useful—but merely to prop up hundreds of trillions of dollars of speculative financial debt.  This central banking system is now a creature devouring everything in order to save itself.  Yet, despite the delusions of these billionaire “titans of finance,” the reality is that nothing they are attempting will work.  Their system is bankrupt.  It is at an end.  If we, the citizenry, wish to survive and prosper, we must nationalize the Federal Reserve and restore Constitutional economic and credit policy-making to our Republic.

Coming soon. . . The Origins and Anti-Human Philosophy of Central Banking