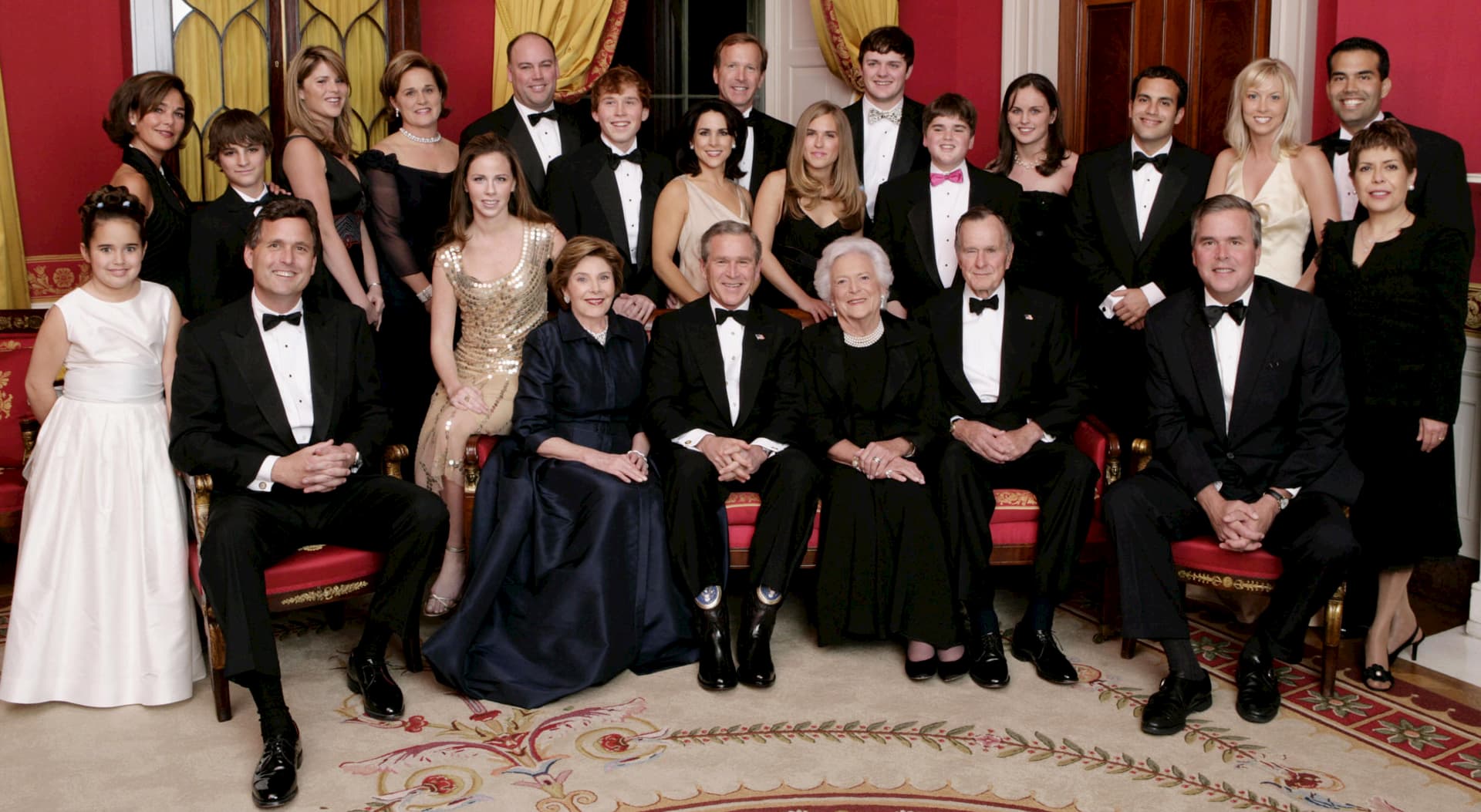 On his way to the White House in 2016 Donald Trump did the nation a great service. With his crushing defeat of the Bush family’s super-funded scion, Jeb, Trump humiliated the Bushes like no one had ever done before. Jeb’s defeat was not only due to Trump’s well-chosen nickname for him, “low energy Jeb.” Trump rallied the American people against the hallmarks of Bush family politics: starting and supporting forever wars, destruction of U.S. manufacturing in the name of free-trade, and bailing out Wall Street and London financiers at the expense of the American working people.

Like a nasty virus that keeps coming back, the Bushes seek to regain their power once again.  This time it's through their ideological progeny, called Bushies. This includes the likes of Ron DeSantis, Mitch McConnell, and all the Republican neo-cons and Obama/Biden/Clinton Democrats who want forever wars, fiscal austerity, Wall Street bailouts, and most of all, to stop Donald Trump from being re-elected President in 2024. So, give up false labels like RINO and Uniparty. The troubles America faces come from the Bushies.

From granddaddy Prescott’s early financial support for the Nazi Party in the 1930s, to George H.W.’s lifelong career as the patrón of the national security state which serves the genuine interests of London and Wall Street instead of the United States, to George W.’s disastrous wars in Iraq and Afghanistan, the U.S. has suffered three generations of Bush family crimes.

So next time you hear a Republican, or a Democrat, call for more funding for the war in Ukraine, more funding for Pentagon boondoggles instead of a real high-technology national defense, bailouts of Wall Street sharks, free-trade deals that suck American manufacturing out of our country, or woke/green policies in the name of compassionate conservatism, call them what they are: Bushies.

Trump defeated the Bushies in 2016, and now we must make sure that they, and their ilk, don’t get back in.

Just to Remind You: A Brief History of the Bushes

The Bush family has been undermining America’s national sovereignty for generations—beginning with Prescott Bush, who was a partner in the bank of that Democratic Party bigwig, Averill Harriman. Harriman was also a big supporter of the eugenics movement that promoted the racial theories later adopted by the Nazis. Prescott, while a partner in Brown Brothers Harriman, was involved in the 1934 plot to carry out a military coup against Franklin Roosevelt, and, as a director in Union Banking Corporation, participated in the early funding of the Nazi Party of Germany. After the war, Prescott was elected U.S. Senator from Connecticut. In the Senate he promoted population control with such fervor that he earned the nickname, “rubbers.”

Prescott and his wife, Dorothy Walker, produced the ambitious George H.W. as the second of their 5 children. George H.W. spent his career as a dutiful functionary of the national security state that emerged following WWII. As chairman of the Republican National Committee, he had participated in the coup against President Richard Nixon, and was appointed to be Director of the CIA.  That was after CIA Director William Colby was fired for telling Americans about the CIAs criminal “family jewels” of murderous coups, brainwashing experiments, and illegal domestic operations.  Bush is credited with suppressing any further discoveries of illicit Secret Government operations.

Ronald Reagan soundly defeated Bush in the Republican primary, ending George H.W.’s presidential hopes. Fearing that Reagan, as President, would decorticate the pro-British eastern establishment’s control of the United States, the establishment ganged up on Reagan and forced him to accept George H.W. as his Vice Presidential running mate.

As Vice President, George H.W. oversaw the reconstruction of the national security spy apparatus that had been partially dismantled by the revelations of the Church and Pike committees. George H.W. convinced Reagan to issue Executive Order 12333 which expanded the intelligence community’s operations in partnership with private entities, such as the news media, the Anti-Defamation League of B’nai Brith, and the National Endowment for Democracy. This public-private partnership conducted political operations against political opponents of British imperial policies—most notably, Lyndon H. LaRouche, Jr., who was George H.W.’s most vocal and effective political opponent. This laid the foundation for today’s out-of-control intelligence community illegal targeting of Trump and his supporters.

As President, George H.W. took the opportunity opened up by the collapse of the Soviet Union to start the looting of Russia and the republics of the former Soviet Union, proclaiming a “New World Order.” He lured his one-time ally, Saddam Hussein, into invading Kuwait, and then launched the first Gulf War to expel Iraqi forces and usher in a sanctions regime which killed more than 100,000 Iraqi children. That murderous fiasco set the stage for his son, George W., to invade a decade later. In collusion with then Federal Reserve Chairman Alan Greenspan, he collapsed the U.S. economy with his post-1987-stock-market-crash bailout of Wall Street. He accelerated the exodus of U.S. manufacturing by promoting even more “free trade.”

With the help of Pat Buchanan and H. Ross Perot, Bill Clinton expelled George H.W. from the White House after one term—much to the relief of the American working population. But Clinton, as a Democrat, continued Bush’s policies in all significant respects. Clinton continued the sanctions against Iraq, launched the North Atlantic Treaty Organization’s (NATO’s) war on Serbia, pushed further looting of Russia and the former communist states, and escalated the destruction of U.S. manufacturing with the North American Free Trade Agreement (NAFTA) and the World Trade Organization (WTO)—all Bushie policies. Clinton ultimately reconciled with the Bush family. He traveled to Kennebunkport for Bush family gatherings and George W. called him, “a brother from another mother.”

When George W. seized the White House in 2000, the country went back into the Bushes. With the enthusiastic support of almost all Republicans, and Democrats like Joe Biden and Hillary Clinton, George W. launched the wars in Iraq and Afghanistan which still haunt the country today. George W. pushed for the integration into NATO of former Soviet republics like Georgia and Ukraine, setting the stage for today’s war in Ukraine.

Many Republicans who supported the wars now regret it, but only Donald Trump opposed these wars from the beginning. His forceful denunciation of these failures during the 2016 campaign played a key role in defeating Jeb and ultimately winning the White House by defeating Hillary Clinton—who Trump correctly identified for voters as a Democratic Bushie. To this day, Trump remains unique in modern presidential history:  he neither started or escalated a war, much to the chagrin of the Bushies within and without his government.

As President, George W.’s financial policies fed the bubble which exploded in 2007-2008, creating the biggest financial crises since the great depression. When it struck in 2008, wiping out the livelihoods and savings of tens of millions of Americans, George W. started the bailouts of the Wall Street and London financiers. Ordinary Americans are still paying the bill for this.

Though the Obama/Biden administration promised “hope and change” it continued the Bushie program of wars, bailouts, and globalization. Now, the Biden/Obama administration is doing the same thing.

It’s time, once again, to clear out the Bushies. We did it once, now we must do it again.