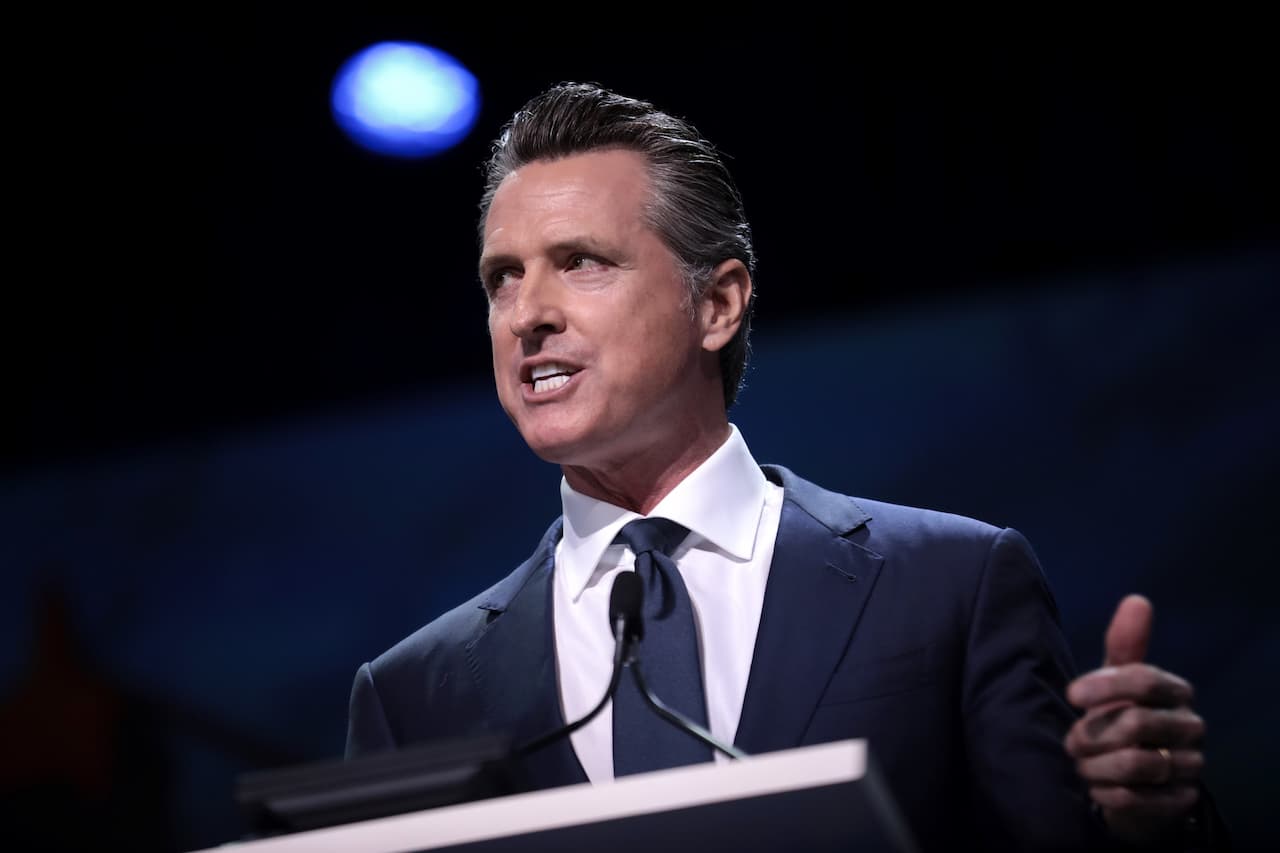 This is an edited transcript of Pat Ruckert's presentation at a special LaRouche PAC forum on energy which took place on Saturday, September 17th. You can watch the full forum on Youtube.

For fifty years the nation has criminally neglected building and expanding the basic infrastructure that provides water, transportation, and electricity for the American population. For almost three generations now, crises have piled-on, one after another, such that now, especially in the southwest states, the agricultural sector, that grows the fruits and vegetables for more than half of the nation does not have water to do so. California and Texas, especially, now experience blackouts and rolling shutdowns of their electricity, as both states have virtually given up on fossil fuels and nuclear power, and instead, have been building windmills and installing solar panels.

Governor Newsom of California is presently the nation's leading criminal implementing this policy.  Recently, he has claimed that his “pioneering policy” will soon be adopted by the entire nation, and that in the near future, the world will follow.

Since the energy policy of California in producing electricity is fundamentally insane, Newsom's threat must be confined to the rubber room in which it belongs. The destruction of our nation's infrastructure has been driven by the world-wide Central Banking system which robs and loots the real physical economy in favor of finance and speculation system.  That is why launching sound energy policy starts with shutting down the Federal Reserve and putting a National Bank or national banking in its place to issue credit solely for major productive purposes – projects which can prove that they will enhance the future general welfare of all.

During these past 50 years, political leaders, companies, engineers, and planners have been forbidden to “think big” and to plan what must be built for two or three generations into the future.  As a result, crises after crises in the present have erupted.  At best, they are dealt with by the absurd policy of “Crisis Management.” Not crisis solution. Band aids and duct tape are applied to any emergency, while the underlying cause of the crisis is put off to another day, which, of course, arrives again very soon, and more band aids and duct tape are deployed once again.

The only exception to this “rule,” is that sometimes an existential emergency calls forth action, even from the worst of leaders, to actually solve the problem.

For example, in January 2017, in the midst of the an exceptionally stormy winter with large amounts of rain falling on northern California, the rivers were overflowing and Oroville Dam, to the north and east of Sacramento, suddenly saw its spillway for the dam disintegrate due to the deluge of water being released from the dam. Oroville Dam is 700 feet high, and the second largest in the state. It holds back 3.5-million-acre feet of water.

Closing the spillway resulted in the dam overflowing from the emergency spillway, which began to undermine the dam itself. The danger then became the potential collapse of the dam itself, sending millions of tons of water onto the communities below the dam. In a panic, a mass evacuation of more than 200,000 people below the dam began. Meanwhile, the main spillway was reopened and the entire spillway over the next few days was destroyed.

The spillway had to be rebuilt quickly. Ignoring all precedent, environmental regulations, and permitting and bureaucratic bidding procedures, a contract for rebuilding was signed in one week and construction was begun one week later. Construction was put on a seven-day week, 24 hours a day schedule, and the spillway was rebuilt in less than one year. Planning and permitting for this project would normally have taken years and construction probably 3-5 years.

Such am existential crisis is what we face today with both the national and especially the California water supply and energy grid. With 40 million people and with its agriculture providing more than 50% of all the fruits and vegetables the entire nation produces, reliable water and electricity for California should never be threatened.

Recall what I said earlier about Governor Newsom promising that what California is doing, going whole hog with even a more extreme version of the Green New Deal than Biden's. Perhaps I should have said that Newsom is threatening the country with that policy. After all, he is running for the Democratic nomination for the U.S. presidency in 2024.

Knowing his presidential aspirations sheds light on how Newson, an architect of  the policy of shutting down California's last remaining nuclear power plants, the two at Diablo Canyon in 2025, suddenly, a month ago, reversed course and sponsored legislation to keep those two plants open, at least until 2030. That legislation was passed about two weeks ago.  Environmentalists, of course, are screaming, but that is expected since California is not only run by the “man caused global warming” cult, it is really the official state religion. Apostates face inquisitions, doxing, and canceling.

From a presidential resume perspective, keeping nuclear plants open in a state that suffers repeated black outs and controlled electricity shut-downs because of his legacy energy policies, obscures and blunts the force of the actual history.

A few weeks ago the governor announced his updated energy policy.  Of course, its entire premise is to eliminate CO2 from all energy use. But the details are important here.

The Governor’s climate proposals include:

In addition, the California legislature, under Newsom’s tutelage, passed a law three weeks ago which will outlaw the sale of new gasoline-powered cars by 2035.  Ironically, just three days later the state was urging the owners of electric vehicles to not charge their cars as the state was facing potential blackouts due to the 100 degree-plus temperature the state was experiencing.

And about two weeks ago, it was announced that, in another worldwide first, California would require new diesel and gas-powered trucks to be zero-emissions in 2040.

The reality that this policy seeks to avoid begins with the fact that California's energy demand is expected to grow 68 percent between now and 2045. Since “renewables” will not be able to meet that demand, the governor not only conceded that all the existing gas plants must remain on-line, but that another 10 gigawatts of new gas-powered generating capacity will be required. This nod to reality angered his environmentalist constituents yet again.

Worse, none of the above takes into account the necessity of a massive and expensive upgrade of the entire electric grid.

Current California electrical generation and use

Of the total electricity consumed in the state, between 65-80 percent is generated in-state. The remainder is imported from power plants in Arizona and Utah, along with hydroelectric power from Oregon, Washington, and sometimes from British Columbia.

Of that generated in California:

What happened three weeks ago as the state experienced more than 100-degree weather? Rolling blackouts did occur in some areas of the state, but because the population heeded warnings, electricity usage did fall. Even so, a record demand of more than 52,000 megawatts was produced in 80% of the state’s electric power system, which included bringing on-line multiple natural gas generating plants.

Only 25% of those 52,000 megawatts came from solar and wind. More than 50 percent was from natural gas, which meant that imports from other states filled most of the rest.

As the state for the past two decades has been shutting down coal, natural gas, and nuclear power generation, while driving the building of solar and wind farms, with lots of state and federal subsidies, the vulnerability of the electric grid has become a recurring problem. Actual blackouts were widespread in 2020.

The San Onofre nuclear plant was shut down in 2012, losing 2.2 gigawatts of power (enough for 1.65 million homes), and the power it had generated was replaced by natural gas, which led to rising costs and, not unexpectedly, soaring carbon emissions.

The average California household pays about $1,700 per year for electricity, one of the highest rates in the nation.  As cities outlaw new natural gas hook-ups, that cost will rise.

In 2000, with the deregulation of California's electricity, Enron manipulated electrical power generation, driving the wholesale price of electricity upwards by 800%   from April to December that year.  In addition, rolling blackouts for weeks at a time were experienced throughout the state. The criminal Enron action bankrupted the state's largest private utility, Pacific Gas and Electric, and nearly bankrupted the state. While the criminals of Enron ended up in jail, the price of electricity for households dramatically increased from less than 9 cents a kilowatt-hour and has been rising ever since.

Nothing short of a political-economic revolution is required to expunge the green cult that runs the state today.

Finance, Insurance, Real Estate, and so-called professional services, now make up more than 40% of the states GDP, as absurd as that measure of a real economy is.

How Do We Build Our Way Out of This?

To reverse this parasite economy requires the LaRouche policy of shutting down the Federal Reserve and establishing a national banking system with its center being a third National Bank of the United States. That is the fight we are in.

To begin, build nuclear power plants. One proposal, from a MIT-Stanford study last year, calls for building four more plants at the site of the Diablo Canyon nuclear plants. This revives the original plan for six plants at this site which was canceled due to the anti-nuclear regime which arose during the 1970s.  The study also proposed that a desalination plant be included in the new project.

With the development of, and soon the deployment of, the new modular nuclear reactors, the building of nuclear power plants can be done on an assembly line.

Nuclear-powered desalination was first proposed and put into implementation by President John Kennedy in 1962. His plan was to build the first plants in California, Texas, and Florida. Even after he was assassinated, in 1964 the first contract to build such a plant was signed by the Metropolitan Water District of Southern California and the Atomic Energy Commission at Huntington Beach, California.  But, because of the shift to a gambling casino economy that began in 1971, and the anti-nuclear insanity that had emerged, that project just died on the vine.

Just ending all state sponsorship and funding of building solar and wind will release the resources for building the nuclear plants. And as many as 30 of them should be accompanied by desalination facilities.