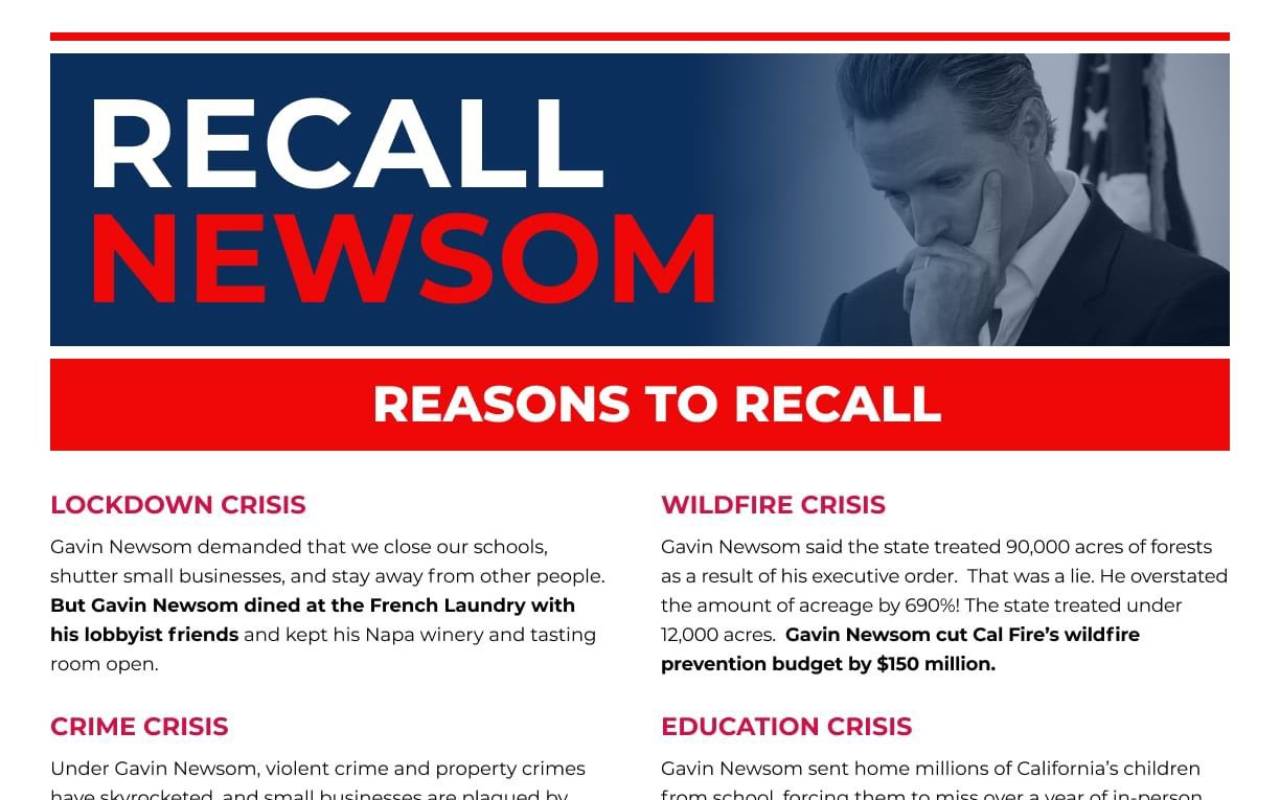 Identity Politics is Mass Delusion. Will You Let These Imposters Dupe You Again? Vote Yes, on the Recall.

While the drought turns the state into a desert, farming is shut down because farmers are denied water, the fires rage on, people die from COVID or poison drugs like Fentanyl, or from joining the vast horde of the homeless, your kids are indoctrinated by Maoists, violent criminals roam just outside your door, your business has shut down and your livelihood has vanished, and your power goes on and off –All of this, and Gavin Newsom says you should keep him in office because he allegedly honors your black, brown, or non-binary identity.

He wants to distract you from the simple fact that this state is being systemically ruined, by him and his billionaire Silicon Valley and Wall Street backers.  He tells you to blame the nation’s “racist founders,” Mother Nature, and Donald Trump, instead.  To win, he courts the Hispanic, black, and Asian votes now, which he must have to win, based on a menu of endless and pure identity politics.

Larry Elder is a black guy from South Central.  He does not buy present ideas about black victimhood.  He leads the polls with respect to candidates who might replace the pretty boy incompetent, Gavin Newsom, as California’s governor.  The main reason for his lead is his insistence that black and brown kids should get the best education possible and Gavin Newsom is an absolute and total failure at that.

So, now, the LA Times has let it be known that white supremacy is like a virus, it can spread to blacks and Hispanics who don’t hold the right political views.  That’s right, the LA Times, among others in our mainstream media, declared Elder to be a black face white supremacist.  Accordingly, he was attacked Wednesday by a gaggle of leftists led by a woman in a gorilla mask hurling eggs.  Someone shot at Elder with a pellet gun.  For those who don’t know their civil rights history, portrayals of blacks as monkeys or gorillas were a favorite trope among actual racists.  You don’t have to vote for or like Larry Elder to vote for the recall, but you should take the insanity of this incident into account.

Newsom plans to shore up his identity politics street credits by featuring Barack Obama in his final campaign push.  Obama is featured in videos making hysterical claims about the recall.   Like suggesting that if you vote yes on the recall, disease and death will envelop children throughout the entire state because a great hoard of the unvaccinated, unwashed, and unmasked will go on some sort of virus spreading rampage.  Really?

California under Newsom, who locked up the state for months, has had hugely disproportionate COVID deaths among blacks and Hispanics.  The vaccine rollout to these groups was just as chiseling and chaotically slow as the state’s fraud infected unemployment program which provided very little actual or no relief to most of the population.    Millions of laid off workers got no checks while the Governor ate, unmasked, at the ritzy French Laundry.  At the same time, Nancy Pelosi loaded up her freezer with equally ritzy ice cream and got her hair done, unmasked, at a downtown shop while proclaiming herself the champion of all the “little people” she was ordering out of business and into face masks.

Then, Wednesday, the intended Obama female clone, Kamala Harris flew into the state for a 12-minute speech supporting Newsom in San Leandro.  Then, she promptly got back on her jet and flew back to Washington, D.C.   It is claimed that Harris, who could not muster double digit support in the state for her own presidential campaign, “rallies female voters of color.”  She claimed, wildly that if the recall won, Republicans would try the same tack throughout the country.  Really?  Can you think of any governor who has presided over such a continuous destruction of just about everything?

Don’t be fooled again.  These people don’t give a damn about your children or their future.   Vote yes, on the recall.  Remember, turn out and vote yes on September 14th to take the state back and finally build California again.