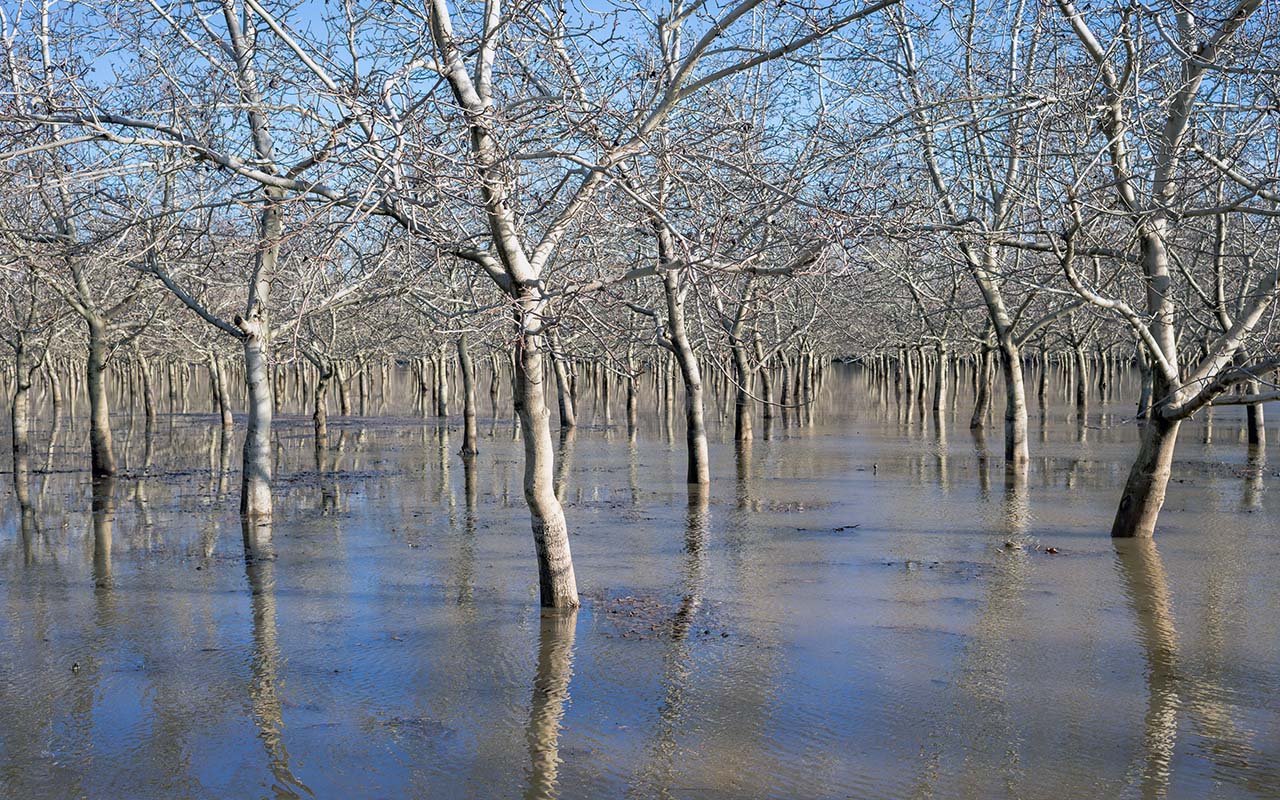 Over the past three weeks, as California has been drenched repeatedly by a train of storms, amplified in their intensity by atmospheric rivers, some journalists have claimed that the destructive drenching is due to climate change and global warming.

But not one meteorologist or climate scientist has made such a claim, nor could they while retaining fundamental scientific credibility.

Other journalists have asked, “Will the storms end California's drought?” The answer is no.  The reason that natural cycles continue to bedevil and destroy this state, is its failure to maintain and modernize what was, as of 1972, one of the most effective water management systems ever built.

The criminally bureaucratic mindset running wild in the Golden State, is seen in the fact that most of the storms’ new water will flow into the Pacific Ocean, not to California’s drought-stricken agricultural sector.  In 2022, the current drought forced the fallowing of about a million acres of the best farmland in the world. Environmentalists and some professors of water management and agriculture, have advocated the permanent fallowing of at least 500,000 acres of that productive land—in a hungry world.

Instead of being captured, the overflowing rivers that flow into the Bay Delta are allowed to flow into the Bay and the Pacific Ocean, while the pumps that transfer water from the Delta into the aqueducts of the State Water Project and the Central Valley Project are only allowed to run at 5-6% of capacity.  According to the Sun newspaper:

After several years of severe drought, the intense storms over the last week would seemingly be a godsend to California and go a long way toward fixing the state’s water problems.

But the opposite is happening as the state is flushing out the vast majority of the incoming water into the ocean.

The backstory: The intense flushing of water from the Delta to the Bay – rather than by pumping to Central Valley farms, storage facilities, and southern California communities – is driven by a 2019 legal document known as an “Incidental Take Permit.”

Sources told The Sun that the first flush provisions were initially triggered on Jan. 3.

So, while just 5-6% of the massive flow of water into the Delta was allowed to be pumped to storage during the past two weeks, the “rule,” cited above, could not be violated.

Congressman David G. Valadao (CA-22) led members of the California Republican congressional delegation to President Biden and Governor Newsom, urging them to waive impediments to Delta pump operations to ensure none of the current storm flows in California go to waste.

But, it was too little too late, as the storms are beginning to abate and California will largely return to sunshine for the rest of January. In December, 2021, a series of large storms dumped billions of gallons of rain and snow on the state, and that evoked the same hopes that a drought-ending winter was upon us. That was not to be. January, February, and March of 2022, normally the wettest months of the year, became the driest winter in California history.  It is entirely possible this is happening again.

What are Atmospheric Rivers?

This refers to a 250 to 350-mile wide layer of water vapor that drives from the South Pacific Ocean region eastward. It follows the jet steam and contains up to ten times the water of the Mississippi River. When it makes landfall on the West Coast, the stream “climbs” up the mountain range, cooling its vapor, which becomes water droplets, and then large amounts of rain and snow.

California's water supply depends on at least three such events each winter to replenish the snowpack and to fill the reservoirs.

Will the Storms End California's Drought?

Not only are the present storms forecast to end this week, but the forecast for the rest of January is that it will be dry—a reminder of what happened last year.

While the U.S. Drought Monitor weekly map of California's drought has shown a steady reduction over the past few weeks, half the state is still in “Severe Drought.”  The determination of drought intensity includes soil moisture, water shortages, levels of streams and lakes, snow cover and runoff. 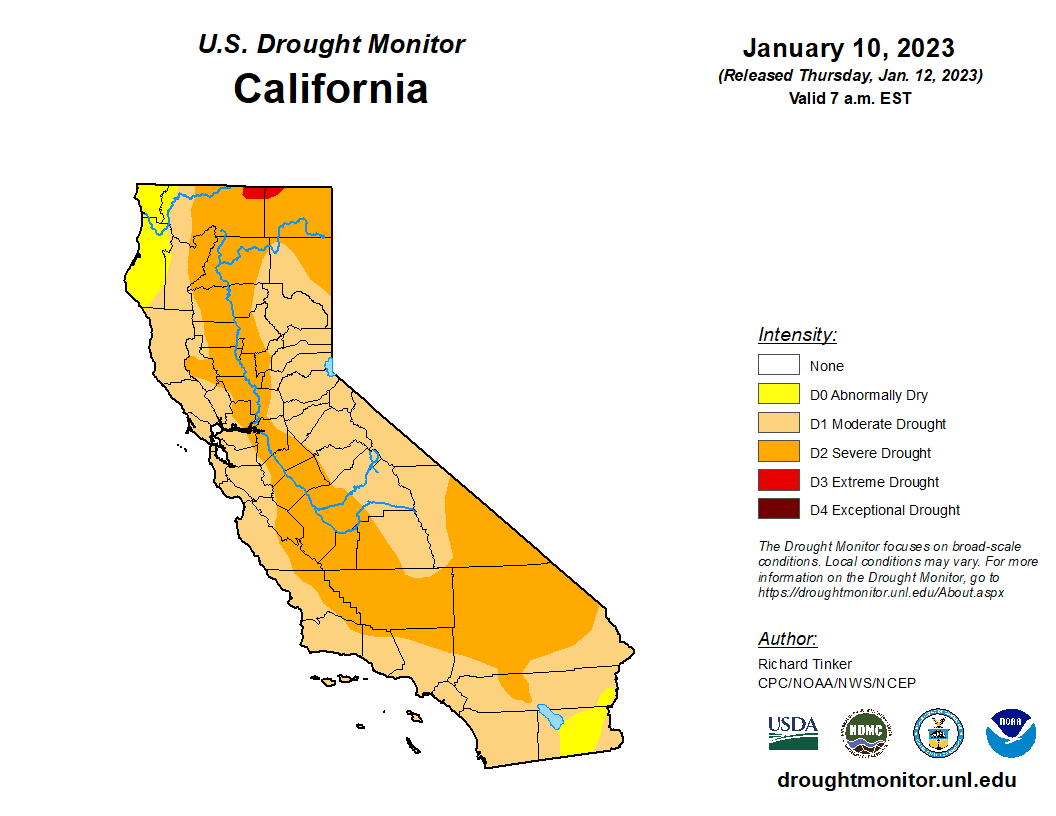 In addition, the soil throughout the region is extremely dry, and the Spring runoff from the snowpacks will be reduced because the soil will absorb much of the water, so that the streams and rivers will not be as robust as they were before the droughts.

The drought has also forced farmers to pump more water from the aquifers, lowering them to levels that dry up shallower wells. More than 1,400 California wells went dry last year. In average wet years, California relies on pumping water from wells for about 30% of its annual consumption. During droughts, that increases to about 60%.  One impact of over-pumping the aquifers is land subsidence, which lowers the surface level of the ground and produces serious damage to roads, bridges, and aqueducts.  Repairs cost hundreds of millions of dollars.  Refilling the aquifers will take years of better than average Winter storms.

Are These Storms and Floods Unprecedented?

The more ignorant of those who claim the floods and drought are caused by climate change, know little or nothing about climate and weather.  Their hysterical rant that every hurricane, typhoon, drought, and flood is due to man-caused climate change, should remind us of the mindless chants of the Hare Krishna cult.

The climate is indeed changing. But climate has always changed and always will. Mankind's activity has little or nothing to do with it. As the water managers on the Colorado River have made clear, the 23-year megadrought over that basin is a natural occurrence that has happened often in climate history.  While there may be some intensification of the drought due to climate change, it is negligible.

California has been in drought for more than fifteen years of this century.  Indeed, for 2,000 years, California's climate has been characterized by alternating megadroughts and mega floods. A 2013 book by two paleoclimatologists at the University of California-Berkeley, “The West Without Water: What Past Floods, Droughts, and Other Climatic Clues Tell Us About Tomorrow,” provides the story.

Over the 2,000-year period they discuss, the West has experienced megadroughts lasting decades, and mega floods. The current drought is the worst in 1200 years. And earlier floods far surpassed the famous 1861-62 flood that put Sacramento and the entire Central Valley of California under 10-20 feet of water for months. Indeed, the climate of the past 150 years is an anomaly, being one of the mildest and wettest on record, and sooner or later—perhaps now—California will return to the megadroughts, interspersed with mega floods, that have characterized the region for millennia.

Officially we have a megadrought on the Colorado River now, and some climate scientists are calling the last twenty years of California's climate a megadrought.  Do the atmospheric rivers, now dumping near record rain and snow on the state, amount to a mega flood? Probably not.

Droughts and floods are given to our planet by nature, and by the complex system of the climate, involving the atmosphere, ocean temperatures, the Sun, and even the movement of the Earth through the Solar System and the galaxy. The impact such phenomena have on our civilization, however, is determined by us humans. Do we prepare by building the infrastructure required, or do we just wait and pray, “rain, rain go away, come again another day?”

Why, in the 21st century, is the state of California, which built the largest and most complex water management system in the world by 1972, plagued with water shortages and floods fifty years later? That question is one journalists and policy-makers avoid. Some because they are ignorant, and others because they don't think of solving crises, but only managing them. Further, the past several decades of not building water infrastructure, or much of anything else in the state and the country, has created a bureaucratic mindset that produces water managers who will go by the “rule book,” no matter what crisis or emergency requires that they tear it up instead.

Of course, that was not the thinking or planning of those who built California's amazing water management system. Two projects on the table in the early 1960s would provide abundant water for California, and much of the rest of North America, for some centuries to come.

The first was the North American Water and Power Alliance (NAWAPA), a project introduced in Congress in 1965, and debated for the next decade. NAWAPA would bring the otherwise wasted water being dumped into the ocean from Alaska, through a magnificent series of dams, reservoirs, aqueducts and tunnels, to the Prairie Provinces of Canada, the Midwest and the Southwest of the United States, and even to northern Mexico.

The second project was announced by President John Kennedy in 1962. Kennedy called for the building of large-scale nuclear-powered desalination plants, with the first to be built in California, Texas, and Florida. Even after President Kennedy was assassinated, the Atomic Energy Commission signed a contract with the Metropolitan Water District of Southern California for the first one to be built at Huntington Beach, California in 1964.

The nation changed after Kennedy’s assassination. The Vietnam War, the rise of environmentalism, and most important, President Richard Nixon’s destruction of the regulated Bretton Woods monetary system in 1971 at the behest of Wall Street and the City of London, were major markers of that shift. Beginning in August 1971, fifty years of financialization of the U.S. economy turned the nation into a casino, shut down and offshored its industry, and halted the building of the modern infrastructure platform necessary to sustain and advance industry, agriculture, and human life.

We can solve the problem of the drought, but only if we learn to think “big” again, planning and advancing great projects of water management, desalination, and weather management. Thereby we will secure prosperity for ourselves and our posterity.  We must educate and support the engineering and scientific cadre for such projects through the next two years, towards making the United States an agro-industrial superpower once  more.  This is the dream envisioned by Donald Trump for his second presidency—a destiny which must become reality in 2024 and thereafter.