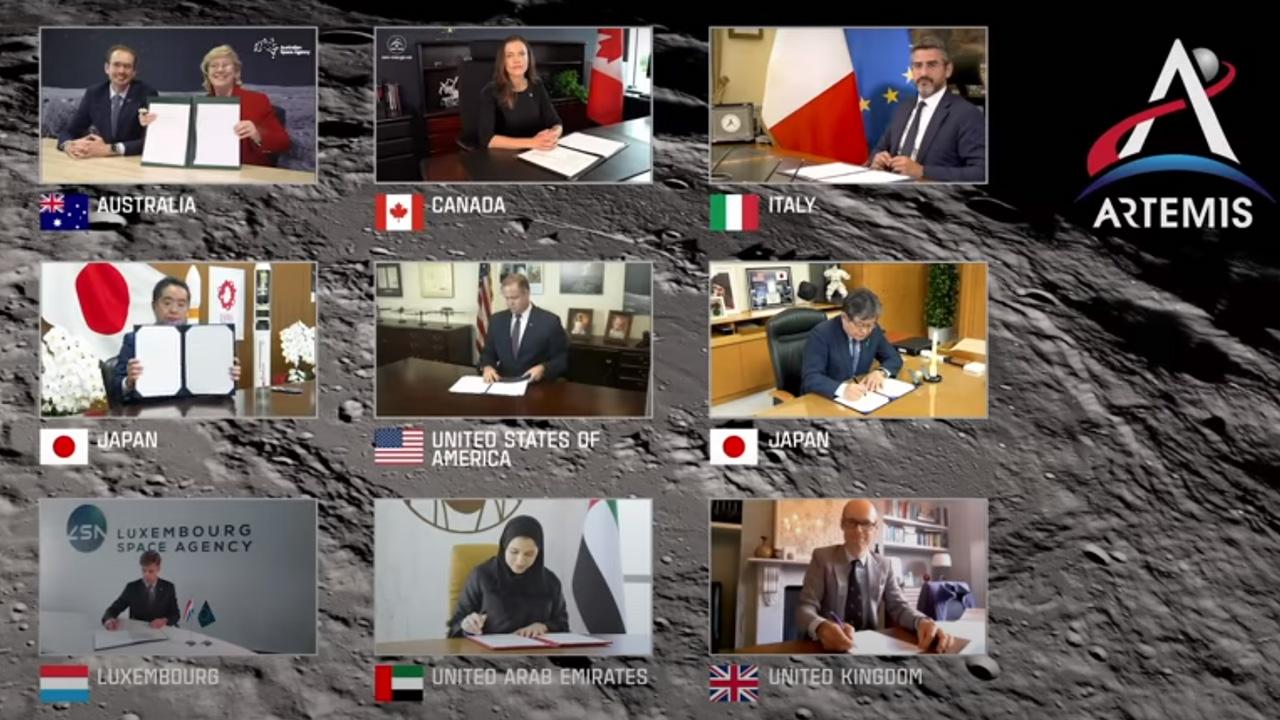 For time immemorial, humans have gazed up in wonder at the sky—at the moon and the planets beyond. Now, humanity is moving to inhabit space itself at rapid speed. The instruments and spacecraft heading to the Moon and Mars and the science and research now underway in Low Earth Orbit, will pave the way for the great advance of humanity into the solar system—humanity’s new frontier.

Just in the last few months alone, we have watched the United States, China, and the UAE/JAXA launch extraordinary missions to Mars, all of which are expected to reach Mars orbit by February of 2021. In May, the first American astronauts launching from American soil, on an American rocket, for the first time since 2011, traveled to the International Space Station with the successful launch of the Demo2-Mission. Recently, China became the first nation to launch the first sample return mission to the nearside of the Moon in over 44 years, with its Chang’e 5 lander. This involved the first-ever robotic rendezvous and docking in lunar orbit.

This year marks the 20th anniversary of the world’s nation states cooperating to explore space through the International Space Station. Experimental science, research, and discovery of new principles continue there with a focus on the effects of microgravity in space on the human body, among other major projects.

On December 9th, the eighth meeting of the National Space Council was held in Florida at the Kennedy Space Center. The highlight of the meeting was the introduction of the NASA astronauts who will form the Artemis team. NASA selected 18 astronauts for this mission. A number of the astronauts selected are members of the 2020 astronaut class, “the Turtles.” The team also features astronauts currently aboard the International Space Station working on breakthrough science research essential to preparing the way for long duration human missions to the Moon and Mars. This Artemis team will help pave the way for the next lunar missions including sending the first woman and next man to the lunar surface in 2024.

The Artemis program outlined under the direction of President Trump is not limited to returning humans to the Moon by 2024. It also calls for establishing a permanent base of operation on the Moon by 2028, preparing the way for human exploration on Mars. A Moon-Mars colonization program was a vision and a mission of American statesman and economist Lyndon LaRouche, first outlined publicly in conjunction with his Strategic Defense Initiative back in the late 70’s and early 80’s. LaRouche’s vision for this mission was further explored in his 1988 presidential campaign broadcast, the “Woman on Mars.”

As outlined in a special LaRouche PAC seminar earlier this year, “Artemis and the True Science of Human Advancement” a Moon-Mars Colonization program,

“is the greatest endeavor of exploration in human history and represents an evolutionary leap in mankind’s existence in the Universe, similar to the first emergence of life onto land from the primordial oceans 430 million years ago.”

In his opening remarks to the December 9th National Space Council, Vice President Mike Pence brought greetings from President Trump, followed by a beautiful dedication to Chuck Yeager, the first man to break the sound barrier with his Bell X-1 aircraft. Yeager died on December 7th at the age of 97. Vice-President Pence hailed Yeager as,

“An extraordinary American whose life and contributions to American aviation have undoubtedly led to inspire the advances that we’ve made in the vast expanse of space.”

The Vice President noted that President Trump had spoken of his vision for space exploration in his inauguration speech as President, saying that:

“We stand at the birth of a new millennium, ready to unlock the mysteries of space.”

Pence developed the growing cooperation of NASA with the commercial space sector, highlighting the achievements with SpaceX and other commercial space industries. Along with our international partners, NASA has stated, “Together, we will define this incredible Artemis Generation of science and lunar exploration, that doesn’t stop at the Moon, but, rather, prepares humanity for our next giant leap, Mars.” Pence, reiterated, “We’re going back to the moon and then we’re going to Mars and beyond.” He noted later that “Americans are going to be the first to develop the economic potential of space exploration.”

The National Space Council meeting also featured updates on developments in the areas of commerce, energy, space force, and other areas by members of the Council. Of these, perhaps the most significant was the reported developments in the energy sector involving space nuclear power. In July, NASA hosted the first DOE and NASA executive committee meeting at the Kennedy Space Center. NASA and DOE established three joint working groups. The first focuses on power infrastructure for the proposed Artemis lunar space camp. The second focuses on developing nuclear power and propulsion systems for future Moon and Mars missions, as well as robotic deep space exploration. The third group will focus on pursuing space science and innovation interest, including weather issues and planetary defense from near earth objects.

The industrialization of the Moon and Mars is going to require unleashing the full potential of thermonuclear fusion power. One of the greatest challenges of human space travel to Mars will be how to shorten the long duration flight and to solve the potential problem of the effects of radiation bombardment on the astronauts. This will require advanced thermonuclear fusion propulsion systems. This is an area of research and science Lyndon LaRouche championed for decades and will be at the forefront of unleashing the economic potential of space exploration. Unlike Earth, the Moon’s surface features vast amounts of He3 which can be mined. He3 is thought to generate controlled fusion reactions far more readily than other materials. China, Russia, and other nations are very focused on this prospect as fusion power is essential to establishing a lunar colony and progressing to Mars colonization. Of course, fusion energy, when effectively harnessed, represents an unparalleled and unbounded energy source for the earth, and will dramatically transform, enrich, and develop all physical economies here.

In his remarks to the Council, NASA Administrator Jim Bridenstine praised President Trump, noting, “this has been a game changing administration as it relates to space.” Bridenstine gave an overview of NASA’s progress on Artemis. The core stage of the SLS rocket is complete and six of the eight tests for the green run have been completed. The last test will be a live fire test of all four R-25 engines. The Orion crew capsule is complete. He said the Gateway was under development and that its power and propulsion element and habitat will be underway in 2023. He noted that for the first time since 1972, the proposed human landing system had been funded and that three companies are now developing this system.

Following Bridenstine, the Artemis astronauts were announced with Vice President Pence exclaiming, that they “will take us back to the Moon and beyond.” NASA also released a video titled “Moon Bound with #Artemis,” featuring a powerful introduction from the Artemis astronauts. The text of the tweet from NASA promoting this inspiring video states, “It is part of the human spirit to explore.” It is well worth watching.