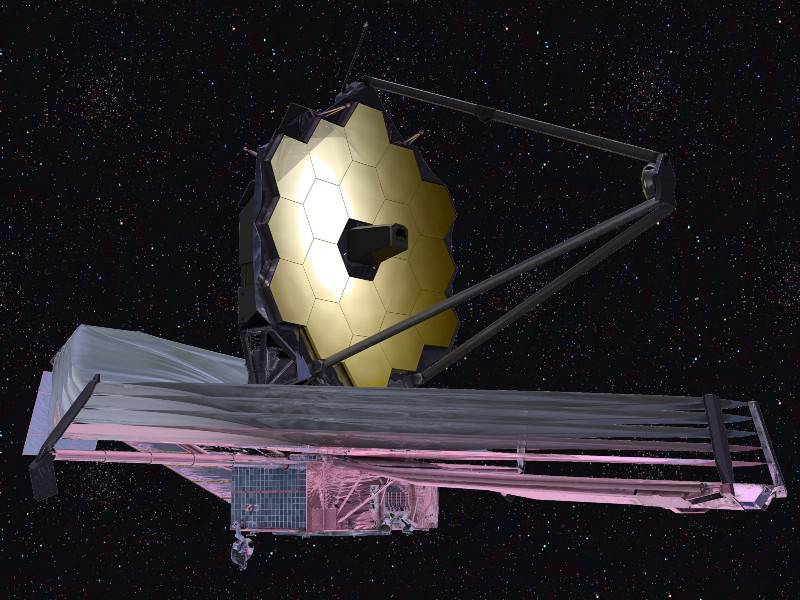 Artists model of James Webb Space Telescope with Sun shield deployed as it will look once in space. (NASA)

The universal mission of America is under desperate attack by the weakened British Empire.  The Empire and its lackies on Wall Street, in Washington, D.C., in academia, in the “intelligence community,” in Silicon Valley, are not content to just physically impoverish and destroy. They are destroying the soul of America by erasing the accomplishments of the past -- that which should inspire the future.

A few decades back, in China, a similar “Cultural Revolution,” almost destroyed that country. It was led by “Red Guards” -- enraged and irrational youth seeking to wipe out “counterrevolutionary forces.”  Any old or foreign person, any established institution was targeted as the cause of the grave problems China was experiencing. Books were burned in huge piles.  The educated and intellectuals were sent to rural areas to “learn from the peasants.”  Thousands were subjected to arbitrary prosecution. No one really knows how many thousands were killed in this process.  Fortunately, for China and the world, that Cultural Revolution finally was ended.

We seem to be at the beginning of a similar process here.  But with the outrageous recent attack on NASA’s James Webb, we have surely crossed a red line –we cannot tolerate this insanity to progress any further.  Humanity’s exploration of space is the driver of all progress on earth.  As President Kennedy emphasized, we chose to go to the moon and explore the stars, not because it is easy, but because it is hard. That goal, as President Kennedy emphasized, will organize the best of our energies and skills, which are not located in our gender identity, but in our creative and reasoning soul, a soul animated with the determination to discover the true physical laws of the universe using science, and conveying them with art to improve our lives.

James Webb is an American hero in this respect.  But, according to an article in Aviation Week & Space Technology, the Biden collective is considering whether to change the name of the soon-to-be-launched James Webb Telescope because James Webb, the second NASA administrator and the person responsible for overseeing the development of the Apollo Project and making NASA a center of scientific research, has been charged as an accomplice in the “lavender scare” persecution of gays way, way back, during the Truman Administration.

Like much in the current Biden collective mass hysteria, the charges against Webb are completely false. They have been demonstrated to be so by the black astrophysicist Hakeem Oluseyi. Yet, the smear campaign against this American hero continues, in complete disregard of the facts.

James Webb was the NASA administrator during the entirety of the Kennedy and Johnson administrations.  When President Kennedy set the goal of landing a man on the Moon by the end of the 1960s, this Mission Impossible was dumped into the lap of James Webb to accomplish.  The success of the Apollo Project was in large part due to the leadership provided by James Webb which is why NASA would name its new telescope after him.

The telltale red dye of the British hand in all aspects of our nascent “Cultural Revolution” is the common oligarchical disdain for human mentation and a love of destruction.  “Drugs to destroy your mind?  --Of course, the sooner the better!”  How about a “splendid little war for a few decades?”  “Why not just burn all of history and make up something that suits the ‘glories’ of the British Empire?”  “Why not just shut down all the nuclear and fossil fuel plants and go back to living in the caves?”  “Why not just shut down half of the farms and see what happens—we have too many ‘bloody wogs’ anyway?”

The American Republic, despite our vulnerabilities, is Constitutionally resistant to manipulations.  The Constitution explicitly protects the right of the minority against the tendency of any temporary (or rigged majority) to attempt to wipe out and silence all opposition with Red Guards styled measures of irrational mob “justice.” The founding fathers knew that Truth is not always apparent and not always arrived at directly.  The First Amendment to the U.S. Constitution was adopted to ensure that over time, the best and most truthful ideas could come to the fore and guide policies and action.

This is why President Trump’s suit against the Big Tech companies attempting to silence opposition and promote the new Red Guards is so important.  That is also why you should call your Congressional representative and flood the White House with the demand that the James Webb Telescope remain the James Webb Telescope.  Finally, the best antidote to this destructive pessimism is optimism.  You can get a big dose of optimism by taking a look at what we can achieve by exploring Mars – a topic which this author explored in this recent post, The Developing Fugue of LaRouche’s Mars Project.