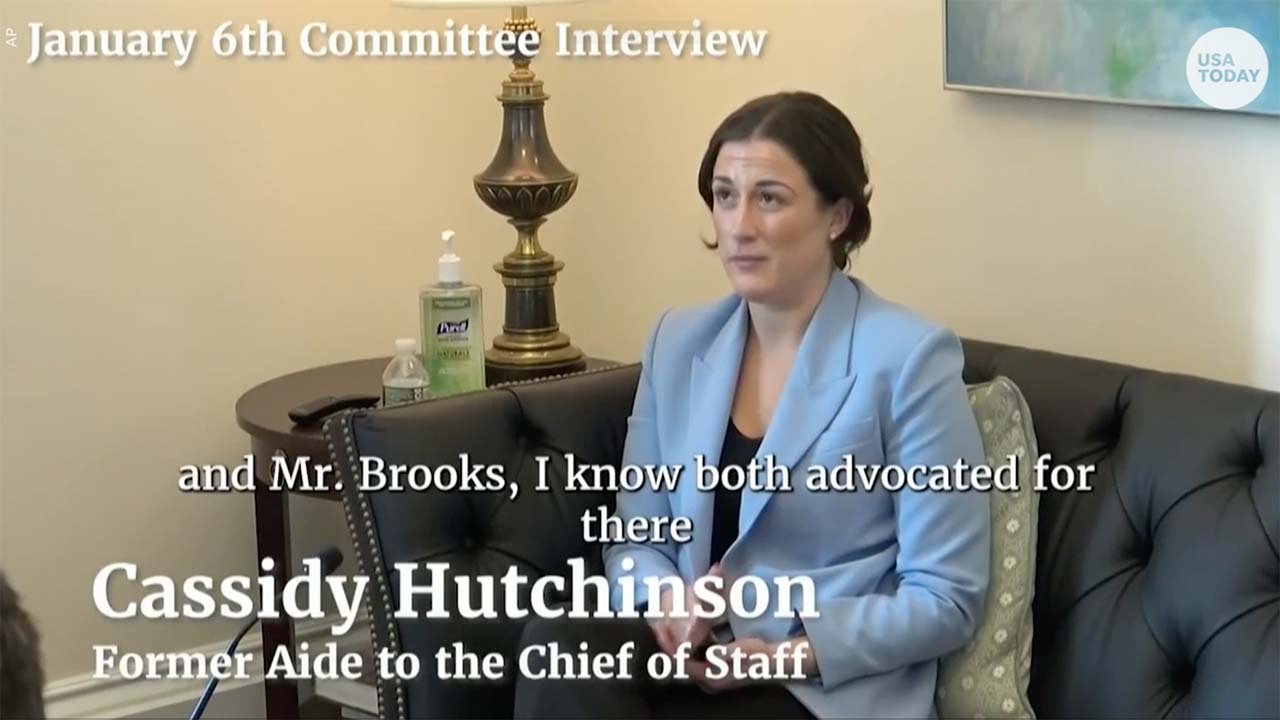 Click here for a .pdf version of this article.

There have been several competent takedowns of the January 6th Congressional Star Chamber following Cassidy Hutchinson’s allegedly “bombshell” testimony on June 28th.  That testimony is now falling apart under scrutiny and exploding right back at the January 6th Committee.  I include in this assessment Tucker Carlson’s very useful June 29th review of the unmoored and unhinged U.S. Justice Department’s continuing destruction and desecration of the Constitution in their quest to destroy Donald Trump and his movement, following Joe Biden’s installation as president.

But the strategic context has to be put in clearer focus.  It is not enough to respond to each atrocity against our nation which has been hurled, by the same axis of evil, from Russiagate, through two impeachments, the theft of an election, and the staged riot which drove Donald Trump from office.  Through these necessary responses and the economic cataclysm now upon us, a newly awake American population has been educated as to the nature of its enemy.  But that population has not yet fully appreciated its power, or won the confidence to wield it fully.  This now must change, as we move aggressively to win the critical 2022 fight for the soul of the Republican Party.

In the ultimately determinative economic arena, Joe Biden, the Fed, Wall Street, the City of London, and Washington’s Uniparty have no answer to the destructive economic tsunami they have created, except the Great Reset and the soon-to-fail war against Russia in Ukraine.  Their answer will, and is intended to, destroy large swaths of the world’s population which their economics can no longer carry or support.  Failed and flailing, the Democrats, their British imperial sponsors, and Washington’s Republican co-religionists now seek to indict Donald Trump concerning the events of January 6th.  The ongoing January 6th show trial taking place simultaneously in the Congress was intended to be the PR component of that endeavor, and Cassidy Hutchinson was the Committee’s cultivated star witness.

Her appearance on Tuesday was hyped as a surprise change of plans due to “new” and “fresh” evidence.  In Monday’s final media runup, it was even claimed that the appearance was necessary now because her life was somehow “threatened” by “what she knew,” a favored DOJ tactic employed when its side is losing.  None of those things were even vaguely true.  Yet the moment the 26-year old finished defaming the 45th President on Tuesday, Washington’s Republican establishment having preassembled their talking points, declared Donald Trump dead as a presidential candidate for 2024.  A barrage of orchestrated media analyses, led by Fox, the Washington Examiner, National Review, and others, declared Hutchinson’s venomous fraud absolutely “devastating,” and a big step toward criminal prosecution.  According to these accounts, the “big money” is now behind Ron DeSantis, Mike Pence, Mike Pompeo, Tom Cotton, Nikki Haley, Tim Scott, or any number of other putative alternative candidates.

Fake polls instantaneously appeared, claiming that Republicans want an alternative because they are tired of the “drama” about Trump.  With the exception of DeSantis, all of these putative alternative candidates are veterans of the Republican Party before Trump–that is, the culture-war-single issue, free trade, forever-war whorehouse built by Karl Rove and the Bush family.

Since Donald Trump remains extraordinarily popular with the Republican base, and is accumulating still more support among the now economically devastated working and middle classes, any prosecution could only be accomplished as incident to and as part of additional national security state provocations, like the January 6th riot itself, aimed at completely demoralizing Trump’s supporters and establishing emergency rule by decree.

Stopping this onslaught in its tracks not only involves fully capitalizing on the destruction of Cassidy Hutchinson’s show trial testimony now underway.  It also means opening the economic flank, and organizing for abolishing the Federal Reserve and instituting a Third National Bank of the United States, devoted solely to realizing Donald Trump’s demand that the U.S. become a sovereign, self-sufficient scientific and industrial powerhouse once again.  This will fulfill the promise of his revolutionary 2016 campaign, and point the way through and out of the economic collapse now engulfing the country.  This must become the sorting mechanism for judging the candidates in 2022, as well as changing, as necessary, the views of those candidates by popular demand.  Nothing less than the future of this Republic depends on it.

Thanks to the Secret Service, we now know, from them, what most sentient people already knew about the most salacious part of Cassidy Hutchinson’s script:  Donald Trump did not attempt to carjack the presidential limo, assaulting his Secret Service detail, in order to lead people whom he allowed to be armed, in an assault on the Capitol.  True to form, the January 6th Committee never even asked the Secret Service if Cassidy’s account was true.  In former times, the flat-out denial by the Secret Service that anything like what Cassidy said had happened, would have instantly shredded her credibility.    But there is much more.  She also claimed, under oath, to have written a note on January 6th—but which White House lawyer Eric Herschmann now says he wrote.  Other sources are saying that Hutchinson fabricated whole conversations which she claims to have had with White House Counsel Pat Cipollone.

On June 30th, Liz Cheney, ever her satanic father’s daughter, subpoenaed Cipollone to appear before the January 6th Committee anew.  Despite the fact that the White House counsel is the quintessential example of normal executive privilege, Cipollone has already testified to the Committee—but apparently in a manner unsatisfactory to the Inquisition.

The Committee’s script-writers used what they claimed was police radio traffic on January 6 to concoct an additional fake and incendiary claim in conjunction with Hutchinson. The alleged police radio traffic claimed that people armed with AK-47s were in the January 6th rally crowd.  No one with an AK-47 attacked the Capitol, and how anyone so armed (and not a police agent) could have escaped arrest under Washington’s draconian gun laws is an all-time mystery.  Yet Hutchinson and the Committee’s scripters plunged ahead to insinuate that President Trump knew that lethally armed supporters would be storming the Capitol, and yet demanded that the Secret Service take the magnetometers down at the January 6th rally.  According to Hutchinson, Trump said the people were not there to harm him and the mags interfered with the camera shot of the crowd.

Most importantly, accounts are emerging about Hutchinson’s motives.  According to Pam Bondi, Florida’s former Attorney General, Hutchinson reached out to her because she wanted desperately to work for Donald Trump in Florida, and had indeed worked at Trump’s post-presidency Washington office for four months.  President Trump says he denied her request to come to Florida, having been told by others that she was untrustworthy and a leaker.  This left the very ambitious Hutchinson unemployed.  But, really? The woman who has just portrayed Donald Trump as an unhinged brute who threw dishes in the White House, wanted Mike Pence hanged, and assaulted his Secret Service detail, was totally eager to work for the President at a time much closer to the events of January 6th than the current Inquisition?

Between her period of unemployment and her four previous tryouts before the January 6 Committee, Hutchinson has somehow managed to accumulate enough money to hire the former head of the Civil Division of the US Department of Justice, Jody Hunt.  Hunt, a confidant of Jeff Sessions, is now at Alston and Brid, a white-shoe Atlanta and Washington-based law firm where hourly fees tend toward the astronomical.

The June 30th Washington Examiner features a claim by former White House Communications Director and Mike Pence aide Alyssa Farah Griffin, that she steered Hutchinson to Liz Cheney.  (In this apparent repeat of previous American presidential scalpings, Griffin appears to be reprising the role of Linda Tripp in the Clinton investigation.  She even worked at the Defense Department, like Tripp, after leaving the White House).  Griffin says that Liz Cheney “knew exactly what questions to ask.” Griffin, a product of Mike Farris’ Patrick Henry College, is so anti-Trump that her own parents boycotted her wedding because of her disloyalty to the President.  She now works at CNN.

As many have commented on social media, the photograph of Liz Cheney pulling Hutchinson into a comradely embrace as she completed her performance tells it all.  What objective Congressional Committee greeting a critical witness, does so with bear hugs?  It was more like a cast party after a play, but that after all is the nature of this very dirty scam.

Meanwhile Over at Main Justice

Late last year, Deputy Attorney General Lisa Monaco detailed Thomas Windom, a prosecutor from Maryland, to begin a criminal grand jury investigation in Washington, D.C., of “Trump’s efforts to overturn the election.”  The District Court in Washington, where any indictment would be brought, has bent over backwards to attack the Trump presidency in a series of hideous legal atrocities which included the proceedings involving Roger Stone and Michael Flynn.  Windom’s work reportedly escalated with issuance of a big round of subpoenas in conjunction with Hutchinson’s Congressional show.

Windom has been described as an overly aggressive prosecutor. His behavior is even described as “troublesome” by the current Department of Justice Pardons Attorney.  Another attorney who opposed him in a court case told the New York Times he was a “bastard.”  Still, she was happy that this bastard was going after Donald Trump.

Monaco is one of three Barack Obama-associated women whom Obama calls his “furies.”  The other two are Susan Rice, Biden’s Domestic Policy Advisor, and Avril Haines, the current Director of National Intelligence.  The DOJ investigation has two prongs—criminal investigation of citizens who signed alternative Electoral College elector slates in the states being contested by the Trump campaign, and the events surrounding January 6th. Democratic Attorney Generals in New Mexico and Michigan both referred the alternate electoral slates submitted in support of Trump in their states to the Department of Justice for criminal prosecution.  These referrals were made despite the fact that the Trump slates were only submitted to preserve the issue, in case electoral legal challenges prevailed in those states or in the Congress.

Reportedly, the charges being explored by Windom include obstruction of a Congressional proceeding (the Electoral College vote), false statements (with respect to the alternate elector slates), and various iterations of conspiracy to defraud the government.  Such charges, in the context of perfectly legal electoral challenges and post-election fraud investigations, would be unprecedented, and yet another DOJ atrocity against the U.S. Constitution.  Hillary Clinton, of course, challenged the Electoral College vote and Electoral College slates for Donald Trump in 2016—yet none of the persons proposing alternate slates or legal strategies faced draconian hoked-up criminal charges.  In fact, the provisions for contesting the election in Congress through the failure to certify the Electoral College vote, are firmly set forth in the Constitution.

Clinton, of course, in conjunction with Obama and most of the people conducting the present Inquisition then engaged in a four-year seditious conspiracy to remove the 45th President of the United States and to prevent him from ever running again for office, a criminal conspiracy which remains unprosecuted and unpunished based on the false premise that the ends justify the means, even if those means destroy the very foundations of this Republic.

Donate to Expand the Fight