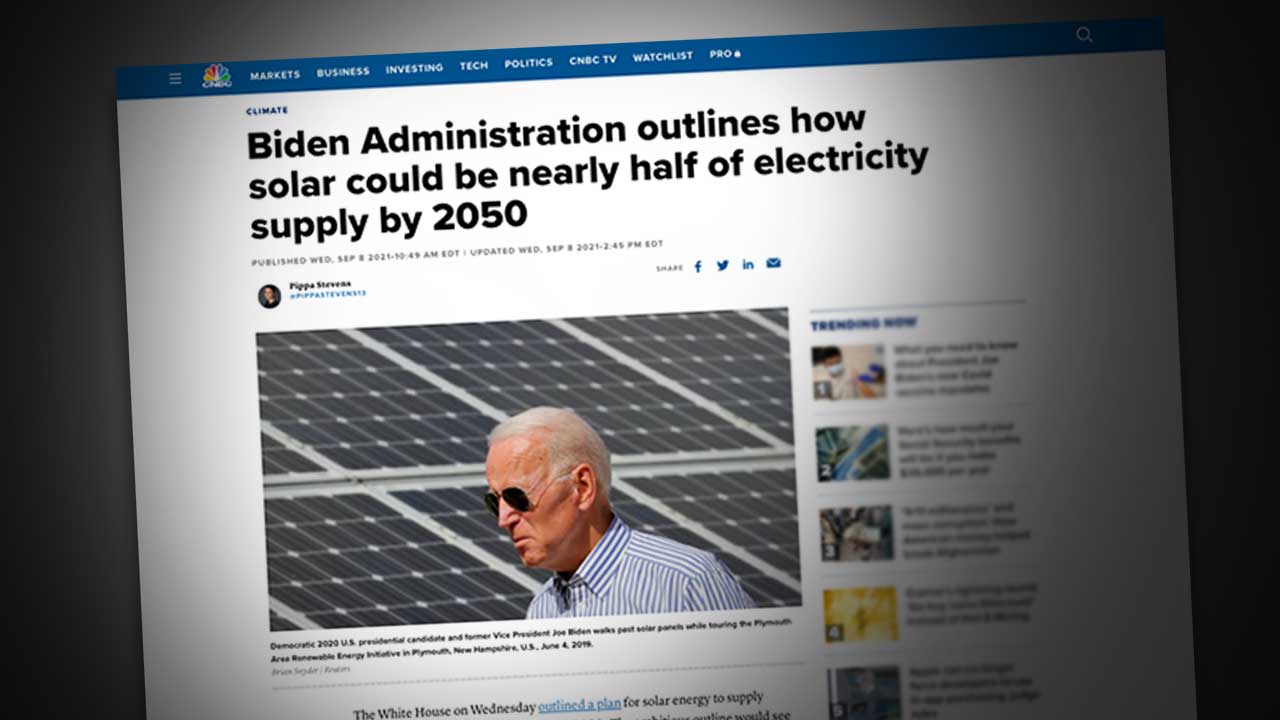 Electric blackouts and brownouts have become endemic in parts of the country, especially in California, as the Energy Department (DOE) issued its Sept. 8 report. For example, power had just been ninety-percent restored in New Orleans after a 10-day blackout, but 342,000 elsewhere in the state were still without electricity. Of 26 deaths attributed to Hurricane Ida in Louisiana, 11 were due to the blackout.

It is in this circumstance that Biden’s Energy Department is calling to increase the proportion of intermittent, unreliable solar-generated electricity from 3% today, to 40% by 2035. For this to happen, the annual rate of installation of new solar generating capacity will have to double immediately today, and then double again (for a four-fold total increase) beginning in 2030.

The entire report is far removed from the reality of anyone at all familiar with today’s electric power industry, first of all because it creates the impression that conventional power plants, such as coal, natural gas and nuclear, can be closed down as solar-powered generators are added.  This is untrue. Because of the inherent intermittency of solar power, for every megawatt of solar power capacity present on a grid, one megawatt of a conventional “dispatchable” power source (in spinning-reserve status) must be ready to be turned on at any moment to avoid blackouts. Thanks to nighttime and cloudy skies, it has been estimated that existing solar plants deliver only 14% of their nominal capacity during a year.

This confusion becomes surreal when the report describes a hypothetical future, after 2035, when total generation capacity will increase from its present level—not to support re-industrialization, as it should, but to replace traditional uses of fossil fuels (like home-heating, for example) by consumption of electricity instead. But this is clearly impossible with solar power.

The report creates the impression that energy storage in lithium-ion batteries has solved the intermittency problem with Solar, but it has not, as the latest study from the North American Electric Reliability Corporation makes clear.

To top off this delusional fantasy, the DOE claims its program will create 500,000 to 1.5 million solar jobs by 2035. If that is true, the value of these jobs to society is determined by the fact that they’d be replacing cheap electricity with far more expensive and less reliable electricity. While solar has no cost of fuel, this benefit is far outweighed by its massive capital costs. When solar is declared the cheapest form of energy, these capital costs are hidden under government subsidies, such as state mandates. LaRouchePAC’s Ben Deniston demonstrated that solar and wind are the most expensive sources of energy, by directly comparing the amounts of physical capital consumed (see the 13 minute video below).

Those million solar jobs would be producing less value for society than they consume. Negative value added. British economist and fraudster John Maynard Keynes famously lied that the U.S. could emerge from a depression by paying men to dig holes and fill them up again.  Deniston said that in this case, the men are digging the holes, then throwing in their shovels and filling them up by hand.

Who would expect anything else from fake president Biden?

Brian Lantz on The Peaceful Atom: The Awesome Power of Nuclear Energy

Ben Deniston on Why Renewables Will Decimate the U.S. Economy