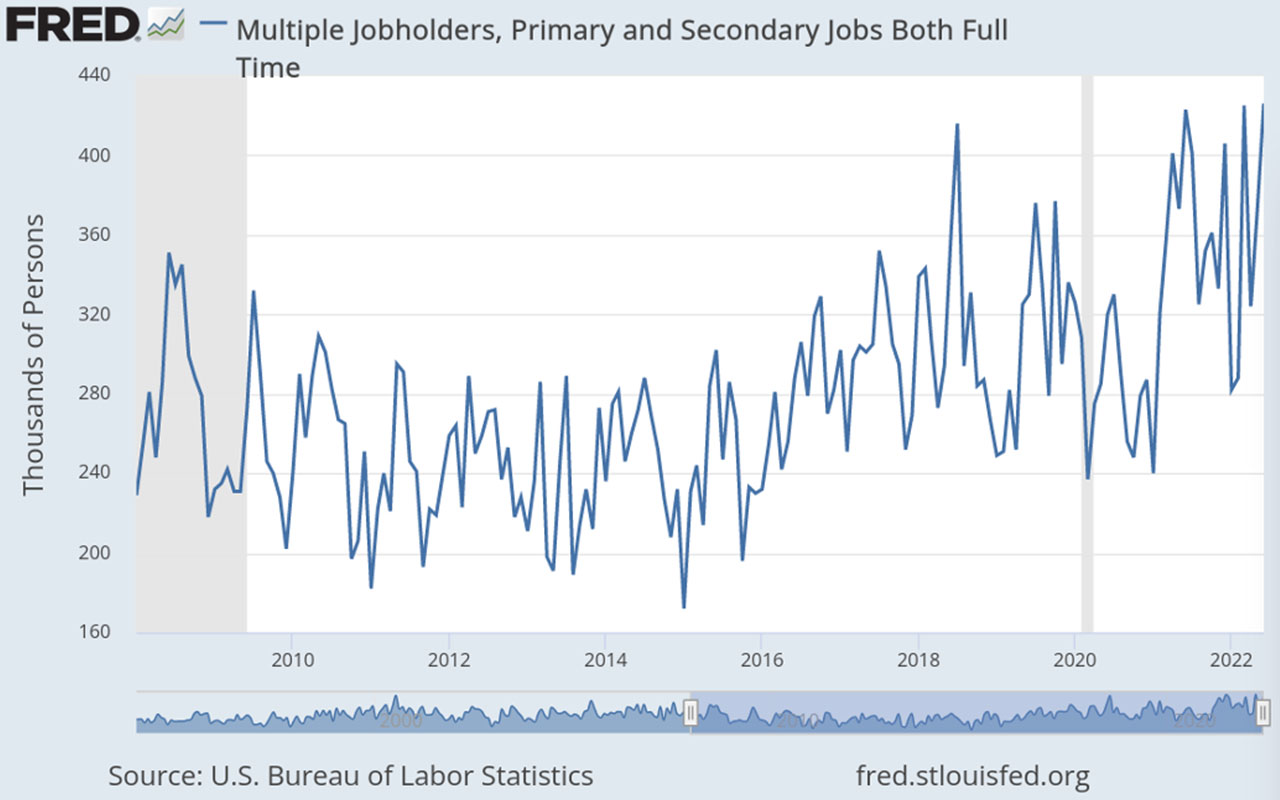 ***Jobholders with two full time jobs: The only jobs that have been increasing!***

If Donald Trump were still President, this would not have happened.

Lately, you and your neighbors have been told every month that US payrolls are increasing, and our employed labor force is growing by an average of 375,000 jobs a month for the period April-June. It has not been true.

You may have wondered, “How could the labor force be expanding rapidly, and at the same time our labor force is losing workers?”

A closer examination of US Bureau of Labor Statistics (BLS) figures gives the story away, by presenting completely different figures.

The Household Survey (Current Population Survey, CPS) done by the BLS, shows that since March the number of full-time jobs has actually been falling.

What is happening? Well, it is actually the number of holders of multiple full-time jobs – whose primary and secondary jobs are both full-time – that just hit a record high! This is shown in Federal Reserve’s own graph, above. This reflects the scramble of many working families to keep up with inflation rate that now, for families just trying to buy the basics, is running in the range of 20%.

This is not the sign of a “strong job market” that Janet Yellen, Treasury Secretary, and former Chair of the Federal Reserve cites as proof that, “We are not in a recession.”

While much of the population are being hurt by the economy, Yellen, and others in the ‘Biden” administration, along with RINOs and the legacy mass media, are trumpeting the monthly “Payroll Survey of Employers” (Current Employment Statistics - CES), also done by the BLS. That survey counts the holders of two full-time jobs twice! (As each employer reports their own payroll, and the CES simply adds those payroll numbers up.)

It is this Payroll Survey of Employers, which gives reported employment figures every month to CNBC, NPR, etc., which has shown nonfarm payrolls growing by an average of 375,000 jobs a month over the past three months – more than a purported one million increase in the US labor force. This while the BLS’s own Household Survey shows the economy actually losing an average of 116,000 jobs a month during the same span.

Not that it is really a secret. Official initial claims for unemployment benefits have also trended upward to the highest levels since last November. The Institute for Supply Management (ISM) survey of purchasing managers at U.S. factories also showed employment contracting in May and June. In the latest Dallas Federal Reserve business survey, thirty percent of Texas-based manufacturers are now reporting declining orders, and so-on. Honest July figures, as they come out, will show more.

Nope. There is also no unexpected “labor shortage,” when you look at the overall US “Labor Participation Rate.”

As of June, 2022, the official US labor force participation rate was at 62.2 percent, and the employment-population ratio, at 59.9 percent.

This is actually slightly higher than the Bureau of Labor Statistics projected it would be, in their published projection made back in 2013.

Yes, we know, there are obvious “labor shortages” being reported. But what the much-talked-about “labor shortage” actually points to is: (1) the inescapable requirement that we rapidly move to motivate, upgrade skill levels, and productively redeploy our existing, currently under-skilled and misallocated, workforce; and (2) the need to create the economic and societal pre-conditions whereby, over time, there is increased US population growth, primarily by increasing family formation and the number of children being born into each young American family.