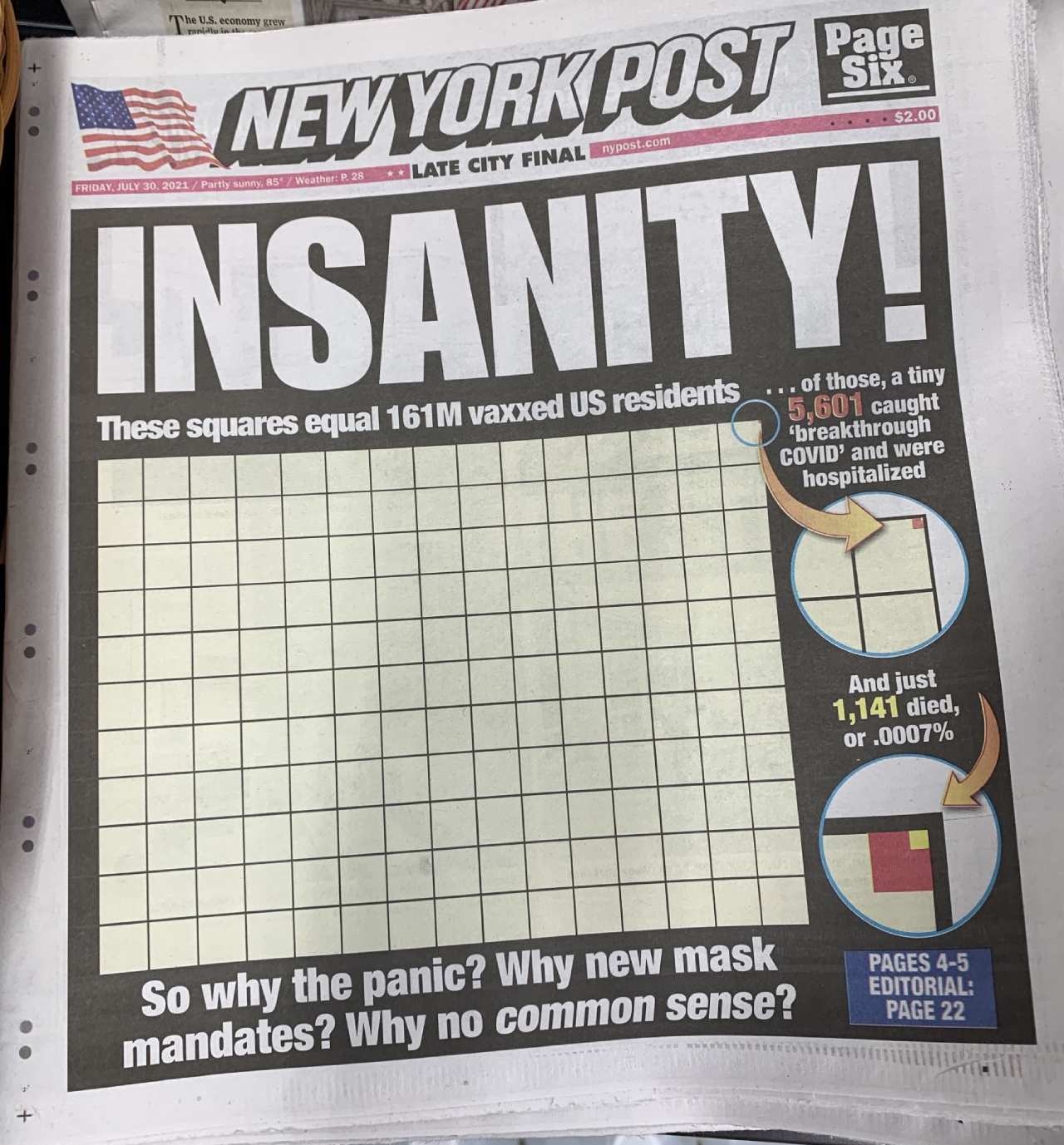 On Tuesday, July 28th, the CDC revised its COVID guidelines, citing concerns about the so-called Delta variant of the virus.  Now both the vaccinated and unvaccinated are being mandated to wear masks while indoors in areas of high case incidence.  The Surgeon General even advocated masking outdoors.  The Biden Administration also issued vaccine and/or mask/testing mandates for all federal employees. In late breaking news on Friday, the Avatar President said that it is “probable” that even more restrictions are coming.  Most think this refers to new emergency lockdowns.

On Wednesday and Thursday new public polls showing Biden’s approval ratings were released.  They showed Biden tanking, dropping like a rock.  Given that these polls are fake, milked for as much Biden popularity as can be ginned up, the private internal polls by the Avatar’s collective have undoubtedly been immeasurably worse.

As Tucker Carlson put it, there is a correlation here.  Biden rode the fear and hysteria which Democrats and the intelligence community/media ginned up around the initial COVID outbreak to the White House.  Why not try the same thing again with respect to 2022?  What else could explain this cockamamie policy in which the vaccinated are being masked to protect the unvaccinated, at a point where Biden is trying to convince the unvaccinated to get vaccinated.  He is even offering $100 bribes in taxpayers’ money for vaccination—you know, the plebes out there are supposed to jump at that.

Almost immediately, the power mad Speaker of the House, Nancy Pelosi announced that House staffers who refused the mask mandate would be subject to arrest.  Following a demonstration in which Republican representatives and staffers walked unmasked over to the Senate where Pelosi’s mandates aren’t in force, Pelosi reverted to threatening fines.

Meanwhile, on the southern border, where drug cartels, in collusion with the Biden Administration are running a new human slave trade while importing lethal pound upon lethal pound of the poison Fentanyl into the United States, deliberate Biden policies are generating the spread of COVID.  As an incident at a Whataburger in Le Joya, Texas revealed, illegals suffering from COVID are being handed off to charities and NGOs without any form of medical supervision or alerts to the locales to which they are transported.  Unmonitored and uncontrolled COVID among illegals crossing the border has been generating a huge surge in COVID cases throughout the Texas border areas. https://www.foxnews.com/us/texas-police-covid-illegal-immigrants-whataburger

The CDC changeup came as a concerted information warfare campaign directed at the unvaccinated reached full pitch. The unvaccinated were portrayed in the mainstream media as a new social class ignorantly attempting to kill the vaccinated.   The Avatar President called them stupid.   Governor Gavin Newsom compared them to repeat drunk drivers. New York City Mayor Bill DeBlasio called them criminals.  The central motif of this hate campaign was that all the unvaccinated were Trump supporters from Red States.  This is, of course, totally false.  People of color, first responders, hospital and medical personnel, people who devour scientific journals, doctors --across all political persuasions and professions--inhabit this skeptical demographic.

As Matt Taibbi put it: “I’m vaccinated. I think people should be vaccinated. But this latest moral mania — and make no mistake about it, the “pandemic of the unvaccinated” PR campaign is the latest in a ceaseless series of such manias, dating back to late 2016 — lays bare everything that’s abhorrent and nonsensical in modern American politics, beginning with the no-longer-disguised aristocratic mien of the Washington consensus. If you want to convince people to get a vaccine, pretty much the worst way to go about it is a massive blame campaign, delivered by sneering bluenoses who have a richly deserved credibility problem with large chunks of the population, and now insist they’re owed financially besides.  You can and should read Taibbi’s full piece here. https://taibbi.substack.com/p/the-vaccine-aristocrats-b5d

But it’s more than that.  The sheer insanity characterizing Biden’s response to COVID and the threat to use even more emergency powers to disrupt the lives of vast swaths of the population is the type of stuff which drives people to violence.  Having not found the non-existent domestic terrorists justifying their massive expansion of surveillance and police powers, and with their insane Great Reset globalist policies foundering, are they trying to create domestic terrorists?  Or are they simply grossly incompetent and wedded to a permanent “war” on COVID as their central claim to power?  One thing we do know is that like all SARS viruses --among them the common cold --COVID will come and go.  Britain’s Delta COVID outbreak has apparently already peaked with cases dropping by half in the last days.

You don’t have to be crazy to be skeptical of the vaccines, although the politicization of the virus and their use to impose police state measures has made people crazy.   The vaccines appear to be effective against the virus for the vulnerable and most of the population.  There are breakthrough cases which the CDC estimates at 35,000 cases per week now as the Delta variant becomes dominant.  It is also unclear how long they are effective.  The FDA has still not approved the vaccines generally, keeping the emergency use authorization in place even though more than 164 million people have been vaccinated.

The Biden approach to maximum vaccination of all has resulted in censorship of death and side effect investigations of the vaccines, rather than open discussion of these issues.  Further, therapeutics with demonstrated efficacy in treating COVID have been largely shunted aside by the administration and not fully deployed in the types of community-based treatment programs which could save lives.

Popular skepticism is also fueled by the utter lack of evidence for vaccinating (or masking) children or for vaccinating those who have already had the virus and acquired immunity.  But the Biden Administration is demanding that these populations be fully vaccinated come hell or highwater.  Then there is the absurd Dr. Fauci, who bragged to colleagues about how he undermined President Donald Trump politically at every point he could. Now, as Biden’s chief advisor on COVID, Fauci’s major conflict of interest has been exposed.  He helped fund the gain of function research in China which may have played a role in the virus’ origin, and he has fought hard against any investigation of the Wuhan lab virus origin theory while claiming that he alone is objective science personified.

But the biggest problem which anyone with an extant brain recognizes, is that the entire COVID pandemic has been used as a political weapon, manipulated to create popular hysteria and docility, by Biden’s collective and their globalist buddies at the World Economic Forum.  Their first objective was use it to take down Donald Trump.  Now they are using it to completely reshape the United States under the Davos slogan, “Building Back Better.”  Every tool in the Obama Administration’s behavioral psychology toolbox is being deployed to “shape” an appropriately docile population for the new globalist utopia.  “Science” has been corrupted in this process, reduced to a marketing slogan.

For contrast, think about what a scientific approach to this pandemic might have looked like.  During the race to go to the Moon, between the United States and the Soviet Union, the Soviet literature notes that when President Kennedy made his address to Congress about the mission, the Soviets admitted that they had lost the race, even though they were ahead.  The reason?  Kennedy had involved the entire American population in a great and dangerous mission, the type of popular involvement in a great scientific quest impossible in the Soviet system.

Under a scientific approach, developments in the race to contain and cure COVID would be broadcast widely, debated, and openly discussed with the public –treating citizens as informed citizens, not mindless dolts cudgeled to “obey” the “experts” or else.  Everyone would be informed about the nature of viruses to the extent of our present knowledge and the fact that they mutate and change along with our knowledge of them.  Everyone would be informed about what the vaccines and therapeutics can and cannot do and what we do and do not know.  Every death and side effect coincident with vaccines or therapeutics would be fully investigated and publicly reported, not left to speculation in the darkest corners of the internet.

Family doctors would be fully informed daily of developments for purposes of communicating with their patients and adding their experience to the enterprise.  Outreach by medical professionals to spread knowledge would occur in every community.  Americans would be informed of the disease’s progress and toll in the rest of the world so that there would be no hesitancy in sharing our discoveries or vaccines.  That was Donald Trump’s initial instinct – Fauci and others consciously undermined this.

Instead of following scientific protocols, Tuesday’s CDC announcement violated every scientific norm.  The CDC issued its masking command without the evidence to back it up, claiming that would come later.  Then, they leaked internal CDC documents to the New York Times and Washington Post on Thursday, revealing their “messaging” strategies.  “The war has changed,” “Delta is as contagious as smallpox,” and similar scare headlines were recommended.  The document also highlighted the breakthrough cases now occurring among the vaccinated as problematic.

One of the data points cited in the leaked CDC documents involved a study from India of individuals vaccinated with the AstraZeneca vaccine.  This vaccine is not in use in the United States.  The study had also failed peer review. https://justthenews.com/politics-policy/coronavirus/cdc-justified-new-mask-guidance-based-vaccine-study-listed-failing-peer

Then, on Friday, a full three days after issuing its diktat, the CDC publicly cited its “evidence.”  It said that the new command came as the result of a study of 470 COVID cases emerging from the July 4th celebration in Provincetown, Massachusetts.  Provincetown is a celebrated gay enclave and those studied were mostly middle-aged gay men.  COVID infected both the vaccinated and unvaccinated in Provincetown, and viral loads in the noses of the vaccinated were similar to the loads in the unvaccinated.

In an interview on Fox on Friday, CDC Director Rachel Walensky downplayed the New York Times and Washington Post CDC leaks as a reason for the mask mandates.  Rather, she said, she relied on the Provincetown study and conversations about it with her “international colleagues.”  She was not asked in the extensive Fox interview, just who these “international colleagues” are or what they “suggested.”

Asked about the major outbreaks on the southern border, Walensky dodged the question, looking every bit like a deer caught in the headlights and blamed the surge on southern (red) states generally.  Walensky endorses “vaccine passports,” the favored population control mechanism pushed by the World Economic Forum and their corporatist cronies on Wall Street, the City of London, and Silicon Valley –you know, the fascists who are running the Biden Administration.  She suggested that the Biden Administration was exploring just these vaccine mandates, only to have to walk this statement back on Saturday after a popular firestorm in response to her comments.   It seems clear that the Administration is throwing proposed emergency rule strategies out to the public to test just how far they will be tolerated.

As of this writing, the Red States are in revolt, with governors issuing their own declarations refusing to allow vaccine or mask mandates or any similar measures.  Similarly, major unions are opposing the mandates including the postal workers, the SEIU in California, and firefighters and first responders in New York City.