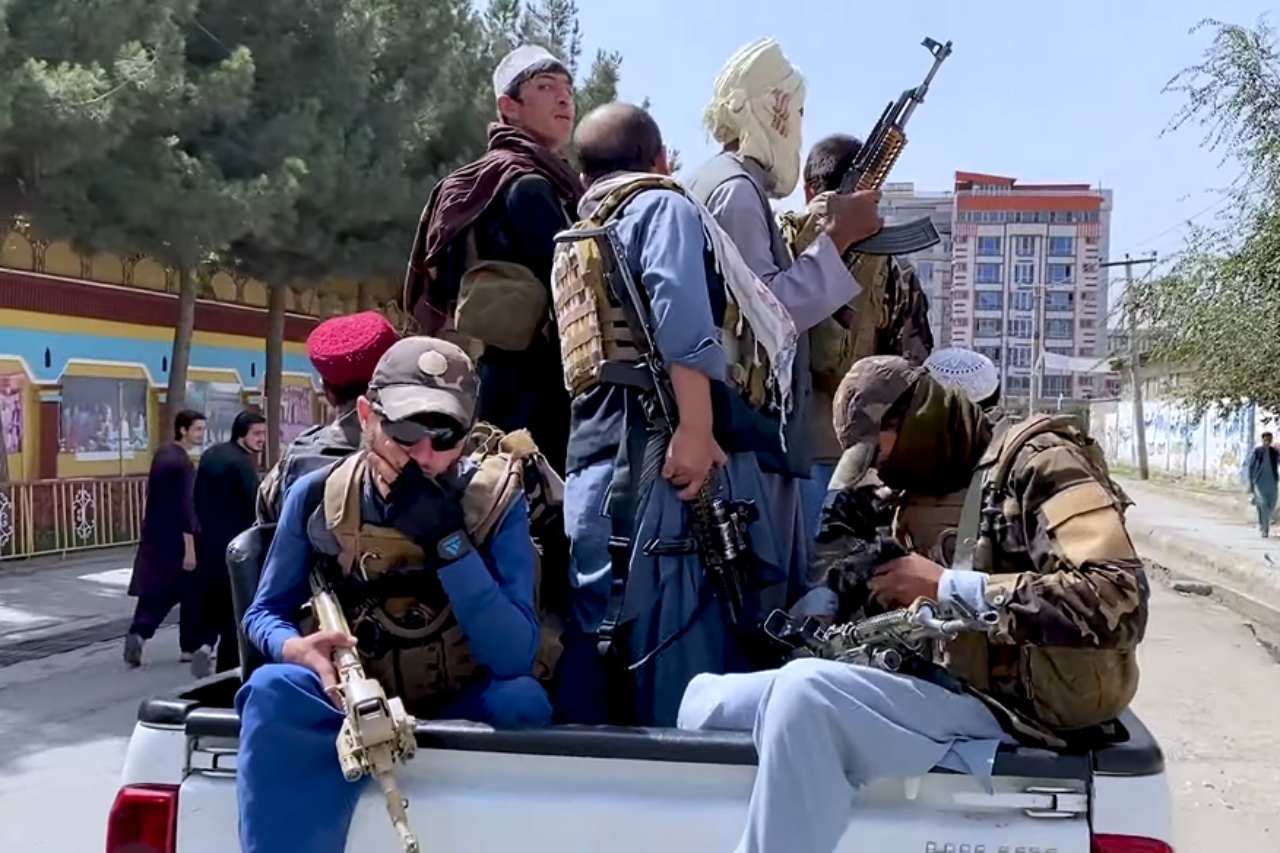 Since August 15, as the debacle and American humiliation in Afghanistan unfolded for the entire world to see, the airwaves and Internet have been filled with reports and commentary detailing with great precision the complete incompetence of the Biden collective’s withdrawal. Now, 13 American soldiers have been killed, 18 other soldiers have been maimed, 95 Afghan civilians have been killed, and many more have been maimed in a “complex” terrorist attack at Kabul’s airport. It involved two suicide bombs and accompanying terrorist rifle fire. The dead and the maimed were totally set up by Joe Biden and his “expert” foreign policy and defense team.

Abandoning any military doctrine and the previous competent plan put in place by President Trump, Biden evacuated the military and abandoned billions of dollars in advanced military equipment first, before considering evacuation of civilians. The chosen sole evacuation airport at Kabul was and is militarily indefensible. In his “deal” with the Taliban, Biden abandoned the defensible airport at Bagram and in the process set free 5,000 ISIS and Al-Qaeda fighters. Bagram was the center of U.S. military and intelligence operations in Afghanistan. Then Biden and his incompetent military brass and State Department put the Kabul Airport perimeter security and all routes into that airport into the hands of the Taliban.

In an appearance on Hannity on August 26, President Trump expressed his profound condolences to the families of those killed and maimed and prayed for them. He attacked the “woke generals” who forgot that in leaving a country the military stays, with its equipment, to safely evacuate all civilians. He noted that this never would have happened if he was President.

The security chief for the Taliban now in Kabul is Sirajuddin Haqqani, https://www.fbi.gov/wanted/terrorinfo/sirajuddin-haqqani who has a $5 million bounty for his capture issued by the FBI. The Haqqani Network is a notorious ally and sponsor of Al-Qaeda, ISIS, and other Sunni Islamic terrorists. Moreover, according to Politico, the State Department and the military handed over the names of Americans and Afghanis seeking to leave Afghanistan through the Kabul Airport to the Taliban. https://www.politico.com/news/2021/08/26/us-officials-provided-taliban-with-names-of-americans-afghan-allies-to-evacuate-506957 There are numerous reports that huge amounts of cash were also thrown at the Taliban by the Biden crew to secure a peaceful exit.

In a Pentagon briefing on August 26, General Ken McKenzie, the on-the-ground CENTCOM commander and resident idiot, continued to assert that the Taliban and the United States have mutual interests which justified his security decisions. Perhaps he has a point, as the Taliban issued a statement on August 25 saying that the new Caliphate was solidly behind the Green New Deal. Many veterans of Afghanistan say that ISIS-K, which Biden claims is the rival of the Taliban responsible for Thursday’s attack, is just the brand name du jour for the same terrorist groups sponsored and spawned by Pakistan’s ISI for decades. What is now assured is that hundreds or thousands of Americans (the State Department has no idea and blames its incompetence on those endangered Americans for not registering with them) and thousands of Afghans who supported the United States are now being abandoned, left behind to the whims of the Taliban and setting the stage for future military interventions in Afghanistan. It also probable that the terrorists will pile on with further attacks before the U.S. totally withdraws on August 31 in order to further humiliate the United States.

This is not to say that we should stay in Afghanistan as an entire coterie of neo-Cons have blustered for the past week on Fox TV and other putatively conservative locales. Biden, like Trump, is correct that any pretext for the U.S. military presence in Afghanistan vanished after 2001. Osama bin Laden, after all, was living in Pakistan when he was killed. But Biden and his collective totally reject Donald Trump’s correct, ongoing, “re-Americanization” of U.S. policy, away from the British Empire’s globalist agenda in which we go abroad creating enemies to destroy while endlessly feeding the corrupt Washington defense industry. While Donald Trump correctly analyzed that the World Economic Forum’s globalization agenda was aimed at destroying the United States, Biden and his team share the Build Back Better and Great Reset crowd’s hatred of the United States and the Judeo-Christian traditions upon which it is founded. They are acting to destroy this country, and as many Americans have noted, are doing so with a destructive fervor which is best described as satanic.

This moment has been long, and short, in the making.

The short cause lies in the assault on American principles conducted by Biden and his “woke” brigades during the entirety of 2020 that brought such a sorry administration into power in the first place. That story is well-known. The media, big tech, and corporate and political elites from both parties joined forces to use the coronavirus pandemic and the death of George Floyd to force through the changes in America’s social, political, and electoral structures which allowed such an illegitimate regime to come to power. As Donald Trump had said repeatedly, “What do you expect. I told you this would happen.” In this respect, Afghanistan is only one of Biden’s many foreseeable failures performed in his first seven months as President. As long as he is in there, there will be more.

The long cause runs much deeper. It is centered in the decades-long attack on the founding principles of America. These are the principles that enabled the U.S. to defeat fascism in WWII and become the world’s leader in science and technology. Those principles were under attack from the day FDR died—from within and without. This is a long story told many times by Lyndon LaRouche. https://larouchepub.com/lar/2009/3612dip_lunch_back2fdr.html It should be known by every American. Sadly, most Americans are ignorant of this history, thanks to the corruption of most of our universities and schools and the foolish myths told by politicians of both parties.

The principle relevant here is America’s commitment to national sovereignty, as embodied in FDR’s repeated warnings to Churchill that America was not fighting WWII to protect the British or any European or Asian empire. The period after the war, Roosevelt told Churchill, would be the American Century, in which the American principle of national sovereignty and economic development would prevail over imperial looting.

After Roosevelt’s death U.S. elites sold America out to FDR’s British enemies, shifting the U.S. economy from a manufacturing powerhouse to a predatory financial center with an army acting on behalf of globalist agendas and interests. Our military policy was shifted from a defense of national interests to pursuing endless no-win wars. Afghanistan is only one of the latest.

In this regard, Biden has been a witting participant his entire career. As a Senator, Biden supported the progressive elimination of America’s economic sovereignty by supporting every globalist financial scheme to come along. When Ronald Reagan sought to re-Americanize U.S. policy by adopting Lyndon LaRouche’s idea of a Strategic Defense Initiative, https://larouchepub.com/eiw/public/1991/eirv18n02-19910111/eirv18n02-19910111_026-the_larouche_doctrine_draft_memo-lar.pdf  Biden joined with Bush Republicans and pro-Soviet Democrats to oppose it. In 2001 he supported Bush Jr.’s invasion of Iraq and Afghanistan. While he did oppose Obama’s “surge” of troops to Afghanistan in 2009, his commitment to using American military and foreign policy power in support of globalism never wavered. In 2014, he oversaw the regime change operation in Ukraine which put neo-Nazis in charge of a government right on Russia’s border and participated in Obama’s use of Al-Qaeda and other terrorist entities to overthrow Syria’s Assad. So, as Trump said, “What do you expect?”

On January 21, 2020, just as COVID was starting to spread around the world, President Trump spoke at the World Economic Forum at Davos and laid out the stark contrast between the re-Americanization of U.S. economic and foreign policy and the failed (British-Imperial) globalist agenda. He pointed out that under his “America First” agenda the United States had revived its economy and its relations with other sovereign nations, including Russia and China, and that the pessimists, who for the past four decades had predicted doom, were proven wrong. Trump correctly located the origin of this “American” principle in the European Renaissance, shaming the globalists for lacking the optimism and love expressed by the Renaissance cathedral builders, who inspired the founders of the United States of America. This optimism was guiding the United States back to the Moon and Mars and toward the development of new breakthroughs in science and technology. Trump’s address set the stage for what should have been his second term in which globalism would be finally replaced with the full force of American optimism world-wide.

There will be those now who bathe themselves in schadenfreude, exploiting the horrible emotions dredged up by watching this clown car administration wreak its havoc upon the world in the name of American citizens. They will endlessly detail aspects of the present disaster but offer no real solutions to the short and the long causes of the disaster in Afghanistan we just outlined.

Yes, everyone who touched this debacle must be replaced. But so too, must every swamp creature who hindered Trump’s plan to re-industrialize and re-Americanize the United States. That involves citizens like you taking the same responsibility for those who died Thursday as Abraham Lincoln asked of our forefathers in his Gettysburg Address. It is a matter of rooting out the globalists’ pessimism about the nature of men and women, a corrosive enraged pessimism which results in many thinking like reactive, impotent little people rather than educating themselves to take full responsibility for running a competent economy and government. The sooner the American people embrace Donald Trump’s call for an optimistic American renaissance and impose a government in that image, the sooner the current horror will end.

For a .pdf version of this statement, click here.