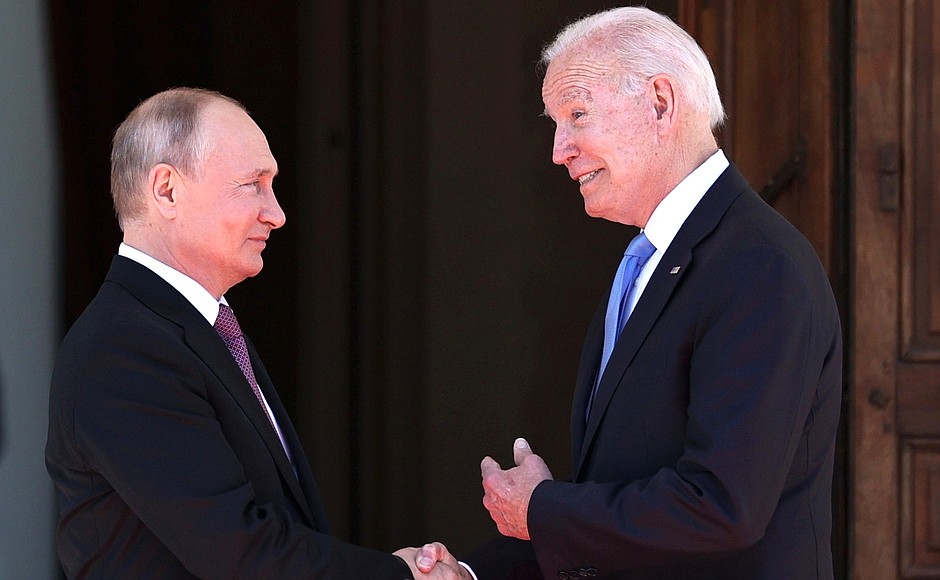 With President of the United States of America Joseph Biden before Russian-US talks. Photo: TASS (en.kremlin.ru)

Watching the braying of the Washington D.C. bi-partisan globalists, Fox News, and the hyenas in the news media, you would think that the summit which occurred on June 16th between Russia and the United States should have consisted of Joe Biden hurling insults at Vladimir Putin in order to provoke a public fist fight. Never mind that one protagonist, the hologram President of the U.S., is a 78 year old guy who has problems reading from a teleprompter and wears aviator glasses as a sign of potency. Or, that Vladimir Putin is a judo blackbelt.

Despite its hyperbolic buildup, with probably more paper and ink spilled in the runup than to any preceding 3 and a half hour meeting in history, the actual Biden/Putin summit seems to have involved an effort by the United States to calm tensions, or at least that is our first impression. The only people who exhibited hysteria were the media asking both Joe Biden and Vladimir Putin ridiculously provocative questions. Biden did make several absurd statements. His claim that the U.S. is innocent of election interference during his post summit press conference, for example, probably provoked audible guffaws throughout the world.

Lots of Washington D.C. Republican war mongers, many of them positioning themselves for presidential runs, will no doubt compete to see who can be the most ridiculously bellicose. Not that Washington’s Democrats are far behind. Washington’s Uniparty desperately wants to make everyone forget President Trump’s determination to get along with Russia, to have fully sovereign nation states, like the United States and Russia, negotiate on behalf of the best interests of their people. The people who voted overwhelmingly to end forever wars? What do they know? Instead, Washington’s “consensus” want to go back to being the world policeman on behalf of the globalist international financier oligarchy known as the modern British Empire. That role has enriched them. Now, they delude themselves that this role makes them important in the long skein of human history.

That said, here is a small part of what we know about the real background to the events in Geneva. Joe Biden has a country in economic freefall into hyperinflation. All of Biden’s Green New Deal is stalled in Congress and reviled throughout a country that really does want to start to rebuild itself and has never believed in the Green nonsense. When Biden went to meet with the “club” of putative allies in the G7, attempting to rally them to a new Cold War against Russia and China, they balked. It is also entirely possible that China is keeping some of the inflation created by Biden and the Fed in check by buying treasuries, keeping its prices low, and supporting the dollar. So, against this backdrop of reality, even Biden and his controllers can conclude that now is not the time for a new Cold War.

Further, Vladimir Putin has a new hypersonic weapons system which has rendered previous U.S. war fighting capabilities obsolete and in the first days of his Administration, Biden got burned badly. Acting on behalf of the “special relationship” with the British, Joe Biden went full flight forward on Ukraine—giving President Zelensky full backing for a genocide in the historically Russian Donbass as the means to “punish” and “reign in” Putin. He was met with 100,000 Russian troops, massed almost in an instant on Ukraine’s borders, something which NATO’s aging and broken arsenals could never match.

While in Britain, Biden says he briefed the Queen about relations with Putin and Xi, which is what she was interested in talking about --not glib small talk over tea. Without a hint of irony, Biden said she reminded him of his “mother.” Perhaps she wants to figure out a way to split Russia and China which is a central preoccupation of British strategists. The Europeans, with whom Biden met extensively prior to the summit are hardly wild about a new Cold War with Russia or sanctions against Nord Stream, which Germany views as a lifeline.

The upshot is that the United States and Russia have now agreed to begin talks on major issues between them. How long this will last is an open question. It depends on Americans refusing to be suckered by those who refuse to concentrate on the real task of rebuilding the United States --what President Donald Trump means by America First. The deluded Washington, D.C. political class hates this idea and has absolutely no idea about how to make this country an industrial power again, as Donald Trump proposed. So, they settle on competing “narratives,” about significant but ultimately secondary issues, or they go around yelling insanely about enemies while journeying down the road to war, or they adopt wholesale, like Biden, the World Economic Forum’s Great Reset, a globalist plan which will destroy this nation.

We will have more to say about the interviews of President Putin by NBC prior to the summit, his post summit press conference, as well as the overall import of the summit over the next few days.