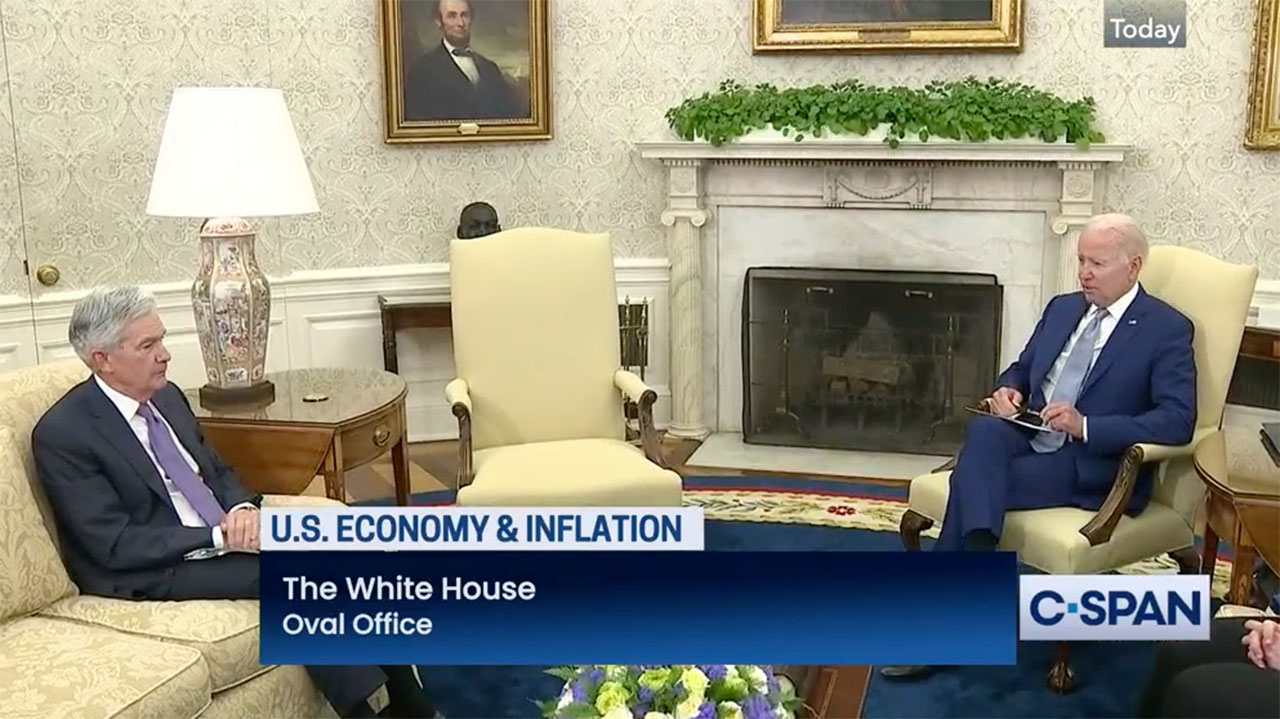 This is not a spoof. It really happened.

Tuesday was “inflation day” at the White House, with Joe Biden meeting with Fed Chair Jerome Powell and Treasury Secretary Janet Yellen on the subject.  The three people who share the most responsibility for the present blowout of the U.S. economy were thus gathered in one place.  Biden mumbled his way through introductory remarks, laser focused on his cue cards rather than making eye contact with his visitors.  You can watch this demonstration of completely absent leadership here. Biden’s script had one singular theme:  he will not interfere in any way with the Federal Reserve.  Presumably, he received assurances from his criminal counterparts, Yellen and Powell, that they won’t interfere with his insane economic agenda.  Biden’s new appointments to that seditious institution have said they will make the Green Agenda a central focus.

This ironclad “hands off the Fed rule” was also point one in Biden’s three-point “plan” to fight inflation presented as an editorial in the Wall Street Journal Tuesday morning.  It comes as LaRouche PAC’s campaign to abolish the Fed and found the Third National Bank of the United States, solely devoted to issuing credit for physical economic growth, gains widespread support throughout the country.

The two other prongs of Biden’s “plan” consist of Congress passing clean energy tax credits and clean energy investments, and those sections of his Great Reset agenda relating to housing, prescription drugs, and child and elder care--while reducing the deficit, largely by taxing the rich.

In reality, neither the Fed or Biden present any solutions for curing the present hyperinflationary spiral which they generated.  For years the Fed has bailed out Wall Street, the City of London, and other financier servants of the globalist oligarchy at the expense of the American people, following the collapse of the post-Bretton Woods imperial system in 2008. The result has been described as the largest bubble in history, and that bubble is now exploding. Biden’s war on energy and war on Russia –all of it at the behest of the globalist modern British Empire --have been major accelerants in the inflationary conflagration.

The only way out involves a crash program to rebuild America’s sovereign physical economy, starting with full employment of fossil fuels, while transitioning, at the same time, to advanced nuclear sources as the economy’s major power source.  This initial push for an advanced infrastructure must be accompanied by building a modern electrical grid.  It also must be accompanied by an immediate end to the Ukraine war, and finding the road to peace.  These steps alone will dramatically ease the cascading inflation in fuels and related chemical products, like fertilizer. Beginning this Saturday, LaRouche PAC will be presenting a three-part class series on ending the Federal Reserve and creating a new industrial revolution through the Third National Bank of the United States.  Make sure you catch this series.