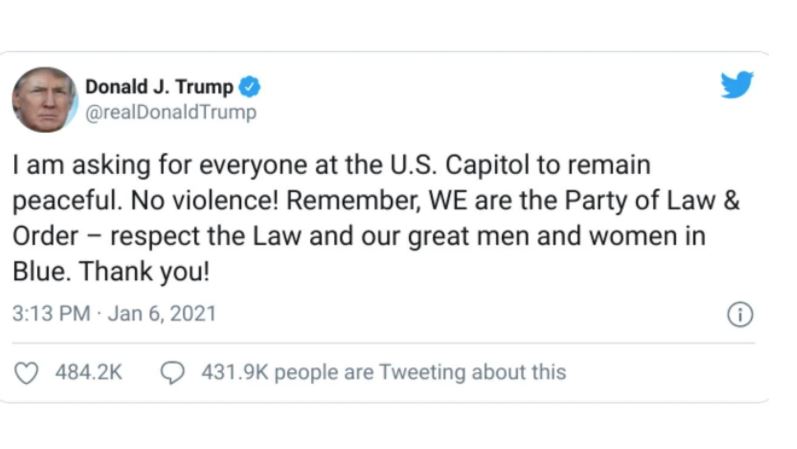 President Trump, Georgia State Representative Vernon Jones, and Donald Trump, Jr. delivered an unequivocal message today to Republicans refusing to fight November’s massive vote fraud – their time is over. That unequivocal message, to transform the party to a genuine force fighting for forgotten Americans and working men and women, has, in all probability led to the ferocious counterattack by compromised Senators in the Electoral College proceedings in the Congress today – attacks aimed at throwing the President and his supporters to the wolves. That this desperate attempt to recapture the GOP, led by Never Trumpers and RINOs will fail was abundantly clear from the actual message conveyed today, January 6th to hundreds of thousands of Trump supporters gathered in Washington, D.C.

In his remarks to supporters at the Save America Rally in Washington, DC, the President himself went after the corrupt Republican Senate and Mitch McConnell. But he singled out the war criminal at the center of the Republican Party for years, Dick Cheney, along with his daughter Liz, for special condemnation. The Cheneys have led the establishment attacks on Trump in recent days.

Donald Trump, Jr. said that the rally itself “should be a message to all the Republicans who have not been willing to actually fight. The people who did nothing to stop the steal... This gathering should send a message to them: This isn’t their Republican Party anymore! This is Donald Trump's Republican Party!” He criticized Republicans in Georgia who refused to vote in the Georgia runoffs as infants who only wanted to protest how the game was played and not fight. He went on to declare that the Trump Republican Party is the party of working men and women and “common sense, reason, and our values.”

Georgia State Representative Vernon Jones, a Democrat until today, declared that he was now comfortable coming home to the Republican Party of Donald Trump since it was now the party of Lincoln, and Frederick Douglass. In declaring himself a Republican, he said that he would be bringing new people and new ideas into the party.