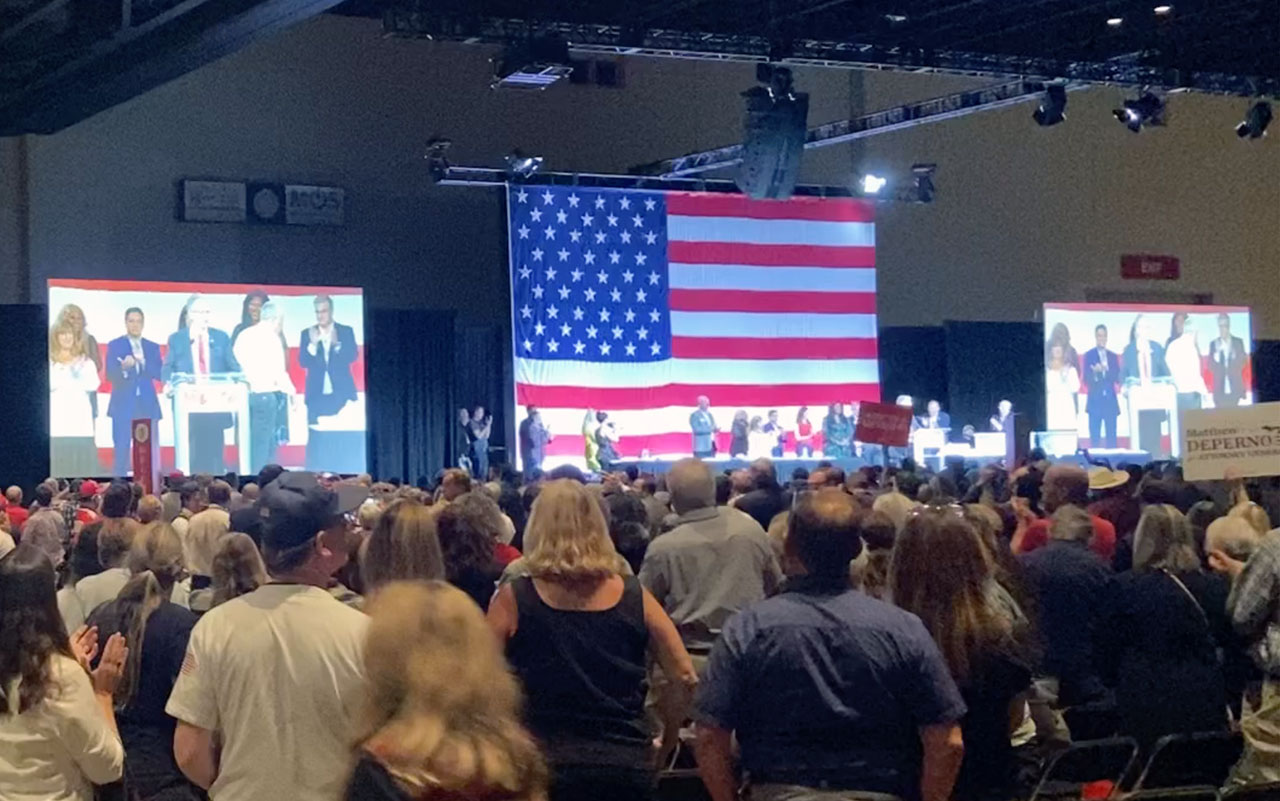 “You just saw history being made,” said a longtime leader of the Trump movement to Mike Steger and me during the Michigan State Republican Party convention on August 27, 2022. Those comments came after more than 2,000 delegates, overwhelmingly representing the pro-Trump grassroots, demonstrated that they were in control of the party, not the establishment, not the big money, and not the global so-called elites.

It is often one of the ironies of history, that critical moments may present themselves in seemingly mundane clothing—in this case a credentials fight over which of two competing delegations would represent Macomb County at the convention.

But the credentials fight, and the convention as a whole, reminded me of a concept that Lyndon LaRouche discussed many years ago, that of “mission tactics”—that if those who are fighting have a clear understanding of the principles for which they are fighting, they will devise the proper tactics as the battles develop. In the days before the convention, LaRouchePAC issued a national statement to clarify that our mission must be nothing less than bringing down the entire globalist system under the future presidency of Donald Trump. That statement was distributed to delegates who readily agreed that taking back Michigan in 2022 is a critical battle in that larger mission.

The fight at the state convention was the culmination of a years-long battle between the “forgotten men and women,” as Donald Trump called them, and the ruling classes who have controlled both major parties. In Michigan, those presumed elites could not have been more appropriately represented than by Ron Weiser, the chair of the Michigan GOP (MIGOP). In the world of the “uniparty,” Weiser had what it takes—deep pockets and membership in the right clubs, like the powerful globalist Atlantic Council.

The convention was convened to officially nominate the GOP state-wide slate for the November midterms. After a last-minute endorsement from Donald Trump, Tudor Dixon won the August 2 primary for Governor, joining the earlier-endorsed and Trump-backed candidates for Attorney General and Secretary of State, Matt DePerno, and Kristina Karamo, respectively. (In Michigan, only the gubernatorial candidate is chosen in a primary, the rest of the state-level candidates are chosen by convention.)

But the question of who was in control of the party was crystalized immediately with Weiser’s attempt to seat his preferred Macomb County delegation, rather than an America First delegation which a court had sided with. Weiser and his RINO establishment ilk ran smack into the brick wall of a new reality—the August election of a tidal wave of America First precinct delegates. The first sign of trouble was the chorus of boos that greeted Weiser’s introduction. But that turned into a full-fledged revolt over the Macomb delegation, which forced the convention to stop dead in its tracks and take a hand-count (of more than 2,000 delegates) to resolve the matter. The Weiser-backed delegation could only be removed by a two-thirds vote of the delegates. The vote was overwhelming, with more than 80 percent of the delegates voting against Weiser. The convention ground to a halt for hours, perhaps while Weiser was digesting a large serving of crow. In the convention hall, the atmosphere was electric. People, many, if not most, of them first-time delegates, knew that something very, very big had happened.

Something very big had happened, and it came from years of patient organizing. In 2016, MIGOP gave no serious support for Donald Trump’s presidential bid, and Trump supporters campaigned for him out of garages and warehouses. At conventions not so many years ago, opponents of the establishment were ignored or threatened with removal. Three months ago, at the April endorsement convention, Trump-backed Attorney General candidate Matt DePerno won his endorsement with just a little over 50 percent of the vote. But day by day, precinct by precinct, and battle by battle Michigan patriots have built their power and now represent a commanding force.

There were many crosscurrents at play going into and during the convention, as anyone who has been out and about organizing amongst this rambunctious movement of relatively newly activated citizens will understand. Some grassroots delegates were not happy with the ticket of Dixon and Shane Hernandez for Lieutenant Governor, despite Trump’s strong endorsement of both. There were concerns that the RINOs would try to dump the previously endorsed DePerno and Karamo. Some wanted to turn the convention itself into a fight over the party leadership. But in the end the mission prevailed, of fielding a force that can take Michigan out of the hands of the witches’ coven of Gov. Gretchen “Let’s Put COVID Patients in Nursing Homes” Whitmer, Secretary of State Joclyn Benson, and Attorney General Dana “Drag Queen in Every School” Nessel.

Now we have an army on the field, which, as Matt DePerno said as he closed the convention, “I am honored to make the motion to close this convention, so we can go and kick … some … ass!”

But equally necessary, is the strategy to actually defeat the enemy. Recent polls have shown that Whitmer is under water on the economy and on support for Biden’s destructive policies. It is only when the Democrats shift the discussion to abortion and hot button issues that they appear to be ahead. That understanding was reflected in the “victory video” played at a rally after the convention, which strongly focused on inflation, energy, and the economic devastation hitting working families.

That is a good first step. But the mission for patriots is nothing short of bringing down the entire system, starting with LaRouchePAC’s campaign to abolish the Federal Reserve and re-establish American banking.

Forging a movement of candidates and citizens prepared to fight for those policies is the mission for 2022, and a vital step in the mission of putting Donald Trump back in the Presidency in 2024.