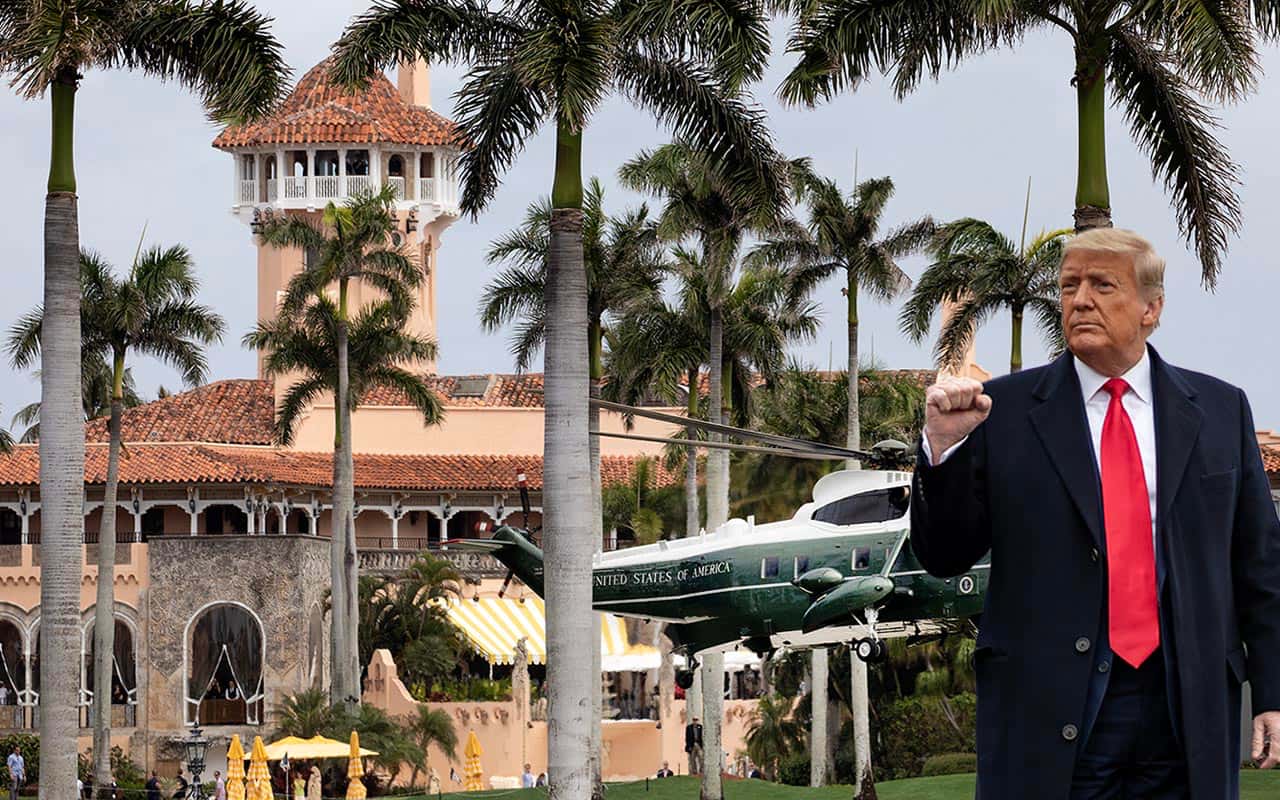 The FBI raided Mar-a-Lago on Monday, sending 30 or more gun-toting agents into President Trump’s Florida residence to search for allegedly purloined classified documents which the National Archives believes belong to the Archives.  As pointed out endlessly, the raid was completely unprecedented in American history.  Never before in U.S. history has federal law enforcement searched the home of a former president, at the behest of his putative rival in the next election, the present sitting President.

It comes as part of an orchestrated and desperate establishment move to salvage the Biden presidency, which includes the passage of the so-called Anti-Inflation Act of 2022 (which will actually increase inflation) and the CHIPS Act (which will reward firms who outsourced chip production to Asia).  Both bills were stampeded through as tokens of Joe Biden “accomplishment.”

The raid is a desperate move aimed at mobilizing the Democratic base for November’s Midterms and provoking a violent response by Donald Trump’s supporters justifying further emergency measures aimed at suppressing them.  It is also a demonstration to the world that the Administration which enforces “democracy” abroad through the barrel of a gun, is conducting the affairs of the United States of America like the banana republic which is Ukraine.

The more than half of America represented by Trump’s MAGA movement have responded with appropriate outrage, a genuine outrage which even swept up some of the recent Trump doubters at Fox TV.  There is every prospect that this outrage will galvanize the massive vote necessary to take the Senate and the House, and the will and intelligence necessary to finally cleanse the stinking swamp that is Washington, D.C.   But that prospect will only become real if the now-mobilized tens of thousands of Americans who have awakened to the peril to our Republic, live with this goal every hour of every day between now and November 3rd.

The media’s definition of the unprecedented nature of Monday’s raid is a very narrow one, indeed. It leaves out the fact that the sitting president, Joe Biden, was installed in an election which was permeated with illegality, and has let it be known to his Attorney General, Merrick Garland, that he wants Donald Trump to be prosecuted.  The sitting President is not only senile; he is implicated through his son, Hunter, in millions of dollars of influence-peddling income gained from China, Ukraine, and other governments throughout the world, and is subject to blackmail not only by the U.S. national security state, but also by his foreign clients, his donors, and the corporate media.  They have also let it be known that prosecution of Donald Trump and prevention of his run in 2024 is essential to Joe Biden’s political survival.

Prior to the November 2020 election, the U.S. had suffered four years of an unprecedented coup against the Presidency which began the day Donald Trump was elected as the 45th President of the United States.  The coup was preceded by a concerted operation, a seditious conspiracy, between the U.S. security state and British and Ukrainian intelligence, operating through the Obama White House and the Clinton Campaign, which aimed to deny candidate Trump the presidency by smearing him as a Manchurian candidate, an agent of Vladimir Putin.

Prior to the 2020 election, a group called the Transition Integrity Project conducted an exercise which gamed how to produce violence during any transition. Had Trump won, the plan was to mobilize the rioters who had rampaged in a looting, burning, and killing spree throughout the country during the summer in response to the killing of George Floyd, for further destructive and even more violent riots.  Ultimately, the military was to intervene to “escort” Trump from the White House for the sake of national unity and peace.  Instead, a controlled riot by Trump supporters was provoked by the very same national security state on January 6, lasting all of two hours but sealing the 45th President’s immediate political fate.

A terror wave was then launched against Trump’s supporters by the FBI and DOJ resulting in unprecedented violations of constitutional rights which were justified under the bogus theory that the provoked and produced riot was “an insurrection.”  All Trump supporters, including parents of children protesting the brainwashing of their children in school who were defined as Trump supporters whether they were or not, were characterized by the U.S. government as national security threats and terrorists.  Accordingly, an unarmed Trump supporter, Ashli Babbit, could be murdered publicly on January 6th, and the police officer who murdered her, Michael Byrd could be hailed as a hero.

Throughout, the FBI, the U.S. Department of Justice, and the federal judiciary--particularly the judges of the completely criminally corrupted D.C. Circuit--have functioned as a praetorian guard for the elite globalist oligarchy which presently runs the country.

The pattern concerning the Mar-a-Lago raid is terribly familiar.  First, Maggie Haberman, the New York Times scribe for the intelligence agencies concerning Russiagate, went on a corporate media book tour over the last two weeks promoting Confidence Man, her gossipy, completely fictional account of the Trump presidency.  The lead fake narrative of her tour was the claim that Trump regularly tore up sensitive documents and tossed them in the White House toilet.  She produced pictures, mind you, graphic pictures of documents in a toilet, which she claims are pictures of documents with Trump’s handwriting in the White House toilet.

18 U.S.C. 2071, a provision of the federal criminal code associated with the Public Records Act, which makes it a crime to “conceal, remove, mutilate, obliterate, or destroy” various records, is widely speculated to be the predicate for the search. If convicted, according to tweets by Democratic Party lawyer and strategist Marc Elias on Monday night, Trump would be disqualified from running for the Presidency.  As the key lawyer for the Democratic National Committee and Hillary Clinton, Elias is the author of many of the acts in the seditious criminal conspiracy against Donald Trump, including the theft of the 2020 election.

Like almost all statutes used against Donald Trump and his associates, 18 U.S.C. 2071 is being applied in a completely novel and selective fashion.  Further, almost all constitutional experts on the right and the left who have commented on this statute, believe that any disqualification from the presidency under 18 U.S.C. 2071 would be unconstitutional.  The Constitution itself specifies the exclusive remedies for presidential misconduct and Supreme Court precedent confirms this.

A similar desperate effort to bar Trump from running for the presidency is at the heart of the bogus and criminal January 6th Congressional investigation, and the illegitimate Grand Jury investigation of Donald Trump concerning the January 6 events currently underway in the corrupt D.C. District Court.

It is likely that former White House staffers and/or Mar-a-Lago plants served as informants for the Mar-a-Lago warrant and were used to fabricate probable cause.  Cassidy Hutchinson, who provided the January 6 Committee with the outrageously bogus hearsay testimony about Trump assaulting his Secret Service agents, is typical of how the current Justice Department runs these investigations.  Hutchinson’s Damascus Road conversion from Trump supporter to hostile adversary, under financial and legal threat, is demonstrated by a recent compilation of her tweets before she fell under the sway of Liz Cheney and Trump-hater and former Congresswoman Barbara Comstock, the other player in Hutchinson’s “conversion.”

The National Archives, which was led by Obama appointee Davis S. Ferriero until April of 2022, had been in a dispute with Trump about 15 boxes of material which White House staff sent to Florida when Trump left the White House.  Trump returned the 15 boxes in January, and FBI agents had previously been allowed to visit Mar-A-Lago to look for further documents this Spring.  According to the New York Times, since the Archives found classified documents in the 15 boxes, they referred the matter to the Justice Department in January.  The Department, actually led by Deputy Attorney General Lisa Monaco, who was described by Barack Obama as one of his three favorite female furies, started a Grand Jury investigation concerning the matter in the corrupt District of Columbia District Court. The leading agents conducting Monday’s raid were Washington-based.

Kash Patel, the American hero who discovered and detailed the Russiagate hoax while working for the House Intelligence Committee, was detailed by Donald Trump to negotiate with the Archives, and insists that Donald Trump had declassified the documents at issue.  Larry Johnson speculates that the center of the controversy may be the infamous book of Russiagate documents, detailing the illegalities in the Russiagate hoax.  These documents were provided to Trump by Director of National Intelligence John Radcliffe and declassified by Trump, but then blocked from public view by the intelligence agencies.

Former federal prosecutor Andy McCarthy speculates that the records dispute was used to secure the search warrant, but once there, the federal agents were actually looking for and seizing documents associated with January 6th.  This is consistent with witnesses’ accounts of the search which seemed more in line with a constitutionally prohibited general search, also known as a fishing expedition.

As noted above, the rage of Trump supporters concerning this latest Washington criminality needs to be channeled into a powerful backlash and boomerang which will end the political existence of its sponsors.  The enemy aims to provoke a violent rebellion, including feeding support for such campaigns as the Convention of the States which would institute an impotent U.S. nation like the old confederation.  The Constitution of Hamilton and Franklin remedied the previous weak and ineffectual government of the states, creating a powerful national Republic.  President Trump has taken the right tack, by seeking to cleanse Washington of its corrupt occupants while populating the national government with competent citizens walking in the footsteps of Hamilton, Franklin, and Lincoln.  That is why he is so feared and hated by our oligarchic elite.