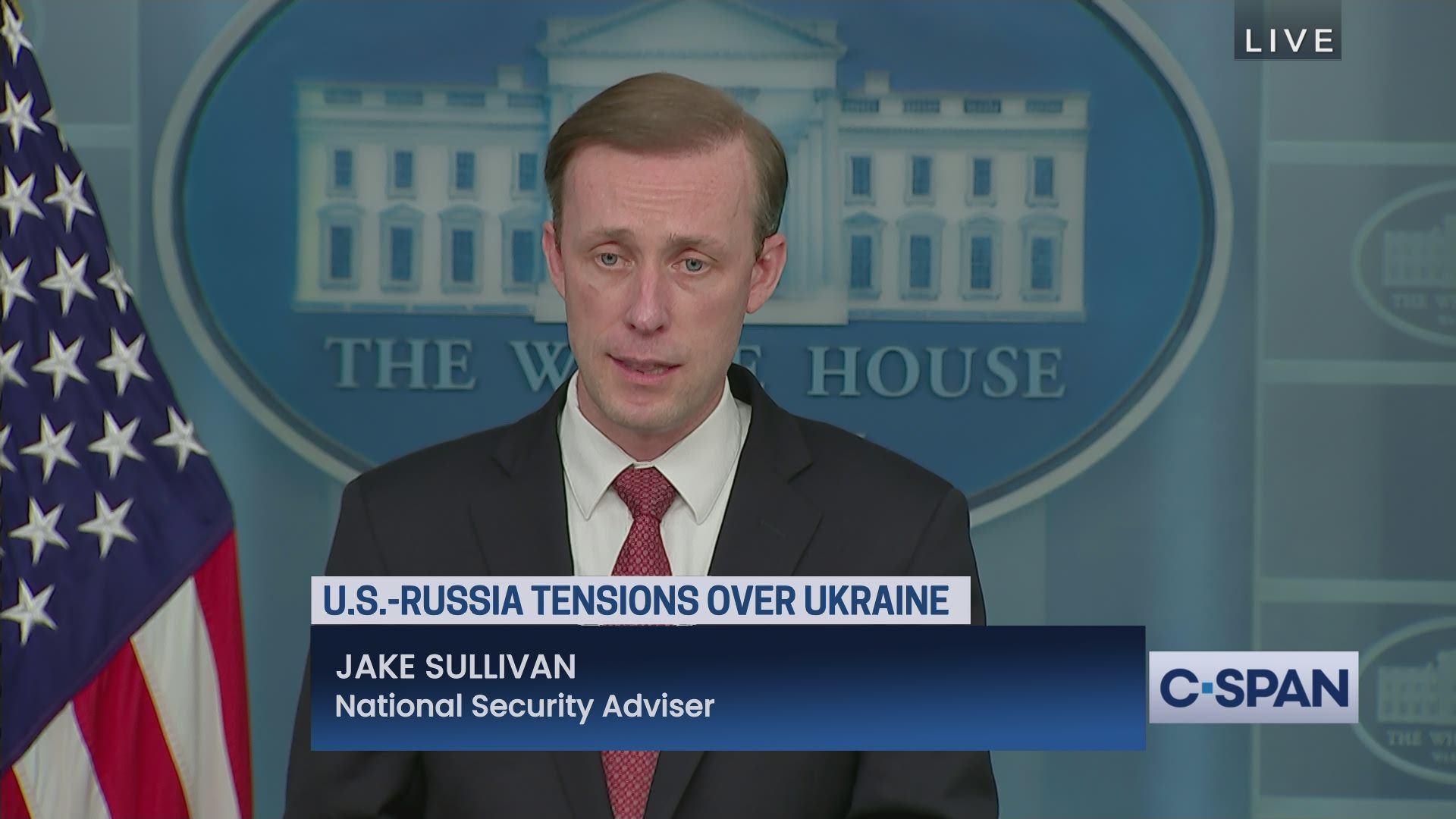 In the late afternoon on Friday, the Biden White House held a press conference featuring National Security Advisor Jake Sullivan warning that a Russian invasion of Ukraine “might” be imminent and that the thousands of U.S. nationals in Ukraine should immediately evacuate because the United States would not be able to rescue them.  Biden has now ordered 3,000 more U.S. troops to deploy to Poland in order to “reassure” NATO allies.  Faced with pushback from the press about what the justification was for the escalation of war hysteria, Sullivan responded, “it’s not my job to convince you of anything.”

Europe, which has substantive economic relationships with Russia, is not onboard with the insanity presently represented by the mad, British-led, economic containment and regime change strategy targeting Russia.  France, Germany, and others have told Biden and Putin exactly that, launching initiatives to actually discuss the very real security concerns Russia is complaining about.  They are also facing a major energy crisis involving the cutoff of Russian gas supplies after Germany, in particular, bought the Green New Deal lock stock and barrel, and shut down its nuclear power and other energy sources.  Claiming it will become a “hydrogen” economy at some point in the future, it is now dependent on Russian gas.

In the same press conference, it was revealed that Biden had spoken to the Canadian, pretend-boy-king, and coward, Justin Trudeau, demanding that the ongoing trucker protest and nascent mass strike be crushed by all and any means.  Trudeau responded with a press conference saying he was about to do exactly that crushing.

Placing a heavy emphasis on his phone call with demented Joe Biden, Trudeau said that they had discussed “foreign monies” supporting the truckers, (surely, we are about to hear about nefarious Russians again in the next round of discussions), U.S. support for the illegal blockade, (obviously by some among the well-over-half-the-country who voted for Donald Trump along with certain insurrectionists at Fox, like Tucker Carlson−humans characterized by both Trudeau and Biden as racist deplorables), and the fact that Canadian banks were monitoring all transactions of those participating.  Trudeau warned that participants would face suspension of their licenses and criminal prosecution, and said that those with children in the blockade, “should leave now,” reiterating that “all options are on the table.” The “all options on the table” language is normally used diplomatically these days when drones are about to be used, although that does not seem to be the case here.

The senile President then debarked to Camp David in order to be in constant contact with his “National Security team,” and is scheduled to speak with Vladimir Putin tomorrow.

Of significant note in all of this is the fact that the Fed has called an emergency closed meeting for Monday, or, in Fed speak, “under expedited procedures.”  This, as the official Fed inflation rate exceeded all expectations and real wages fell by more than 2% for the average worker—decimating paychecks.  Their inflation figures do not include fuel, housing, or food, so actual inflation is much, much, higher.

All of this defines the strategic environment; it is of one piece.  The economy is on the verge of tanking, and Biden’s policies are recognized as a major cause by voters along with the insane money printing at the Federal Reserve which is continuously piling up worthless debt—bankrupting the United States and looting its population on behalf of bailing out London, Brussels, and Wall Street.

The truckers’ protests are a direct response to this and the frantic attempts of our corrupt, deaf, and incompetent elites to maintain control through fear and mandates.  We have a modern slave trade at the southern border, criminal anarchy in our major cities, and a flood of drugs now designed to simply poison large swaths of the working population—particularly youth.  Washington, at best, complains and scandalizes all of this while effectively doing nothing about it. In a recent Substack post, journalist Matt Taibbi accurately caught the subjective blindness now so evident.

The drive for war is a convenient political calculation, just like the faked, January jobs report, designed to help the flailing Biden Administration and the Deep State controllers and globalist financiers actually running things.  All of them know they face potential ruin because the population is awake and recognizes that those allegedly in charge are failing across the board and are destroying the country in the process.

As we have repeatedly emphasized, Vladimir Putin and the complex Russian state he leads, have no intention of invading Ukraine unless the British and American intelligence operatives on the ground there, along with the actual Nazis running the Ukraine defense forces, provoke an atrocity in the Donbass. The question now is whether they will take all of us down with them—a result which is ensured unless those awake now urgently prepare themselves to govern.

A big step forward involves joining LaRouche PAC’s campaign to bankrupt the Fed and create a Third National Bank of the United States dedicated to the types of modern infrastructure, advanced nuclear energy, and frontier space and other scientific projects, which will turn the economy productive again.  That must be coupled with ending Washington’s insane and very corrupt war fever as we seek out the types of sovereign relationships with Russia, China, and India which can break the British Empire and develop the world.