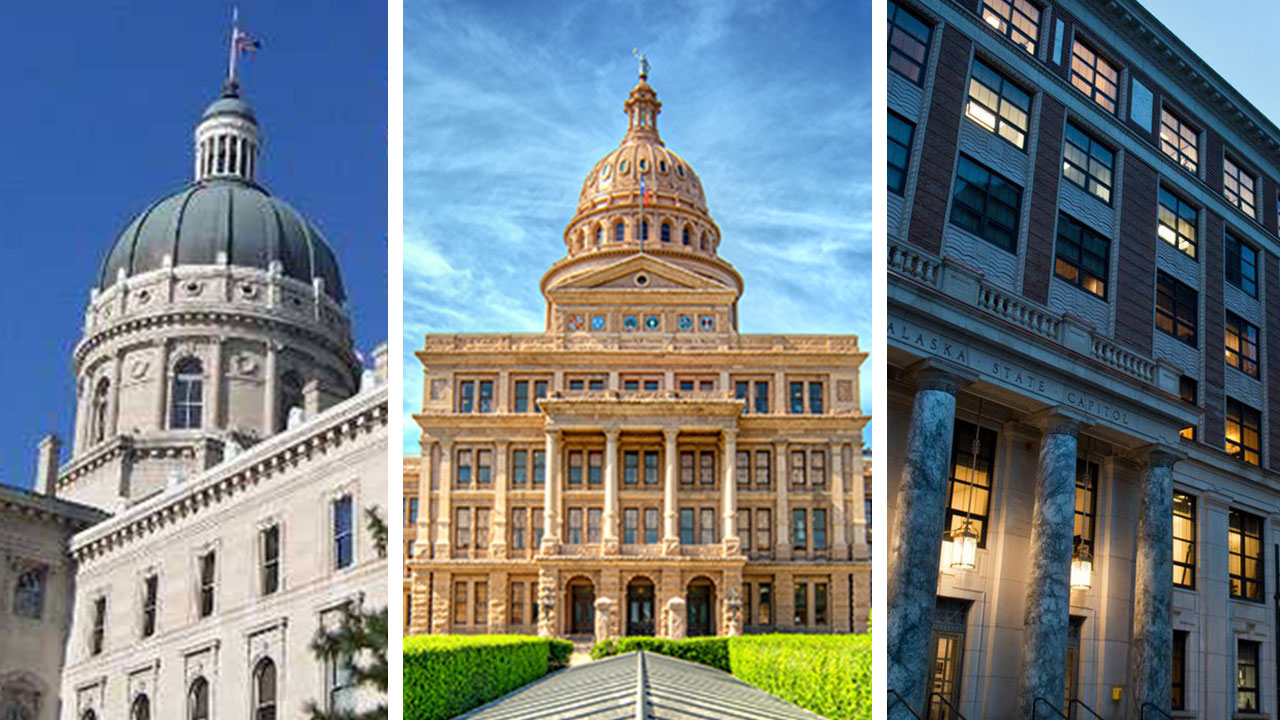 Making the decision to fight for progress—and refusing national suicide—state officials, agencies, and legislatures across the heartland of the US are acting to stop the “Great Reset,” and the Avatar known as Biden, and that Avatar’s Collective now soiling the White House. State governments with their substantial finance clout are rising to fight and defeat the green fascist—“carbon-conscious”—Wall Street and City of London predators who direct the Avatar and his Biden Collective.

Mark Carney, then-Governor, Bank of England spelled out the anti-American City of London agenda in 2019,

"Firms that align their business models with the transition to a net-zero world will reap handsome rewards. Those that fail to adapt will cease to exist. The longer meaningful adjustment is delayed, the greater the disruption will be..."

Black Rock, the world’s largest asset manager, was all on-board.

The Avatar known as Biden was hit with significant set-backs just days after he first occupied the White House. First, a federal judge in Texas temporarily blocked his administration from enforcing a 100-day moratorium on most deportations of immigrants already in the U.S.  Now, US Senators and Congressman have now been on our southern border, investigating and exposing the flood of heroin and other drugs—along with desperate immigrants—pouring over our southern border.  Almost at the same time, attorneys general from 21 of our states sued the Avatar and his administration over his executive order rescinding the permit for the Keystone XL pipeline. Simultaneously, states, having learned a hard lesson and led by Georgia, are legislating real “voter integrity” measures to prevent a replay of the fraud-ridden 2020 elections.  There is also massive opposition to HR-1 and SB-1, which would enshrine fraud-ridden mail-in voting, instant voter registration.

Then on March 24, fourteen of our state attorneys general filed a major lawsuit challenging the Avatar’s executive order halting new oil and gas drilling leases on federal land and water.

Indeed this entire insurgent effort is being raised up from the grass roots, 75 million voters and more, that have been inspired by President Trump and his campaign to “Make America Great Again.” This runs far, far deeper than litigation and the courts, and perhaps nowhere is this clearer than in the growing number of state houses, where legislation is being written, considered and passed, to effectively run Mark Carney and BlackRock, and all similar financial predators, out of town on the proverbial rail.

Jamming up the City of London’s Green Menace

A number of state legislatures are combating the oligarchy’s financial houses who are attempting to cut off fossil fuel investments in oil, gas and coal, and those numbers are growing. Otherwise, these elected officials say, their state economies face collapse. They are taking on Mark Carney’s “ESG”—environmental, social and governance criteria— as worth less than so much horse manure.

As a legal matter most of the lawmakers argue that investment decisions should be made solely based on the likely financial returns, not to be interfered with by so-called ESG. Indeed, a 2019 report by the Institute for Pension Fund Integrity (IPFI) advises state pension funds that ESG has been hurting state pension funds.

However, the fight is about much more than ‘the bottom line.’ “ESG” is a technocratic psyops term adopted to cover for the actual fascist intent of Carney, BlackRock and the Biden collective. As President Trump warned, the intent is the destruction of the US and its Constitution. Money center banks are moving internationally to certify their clients’ operations as “green, social and sustainable,” or to defund them. However, as state legislatures are proving, we have only just begun to fight!

What follows are summary reports of actions occurring across many states, which have received sparse coverage in the “lame-stream media.”

In Texas, Senate Bill 13, was introduced in March after the “Texas Windmill Massacre” that killed over one hundred people. The bill, along with a state House companion bill HB 2189, would direct Texas’ massive investment funds to divest from any companies that “boycott” fossil fuels. The bills are also written so as to prevent companies and others from suing the state over the resulting divestment of the would-be “green” divestors. The tables are turned. The bill is sponsored by six senators, led by Brian Birdwell (R-22) From discussions with legislators and staff, it is clear that the bill will pass the Texas State Senate and HB 2189 has broad support in the House.

... If, after the time provided by Subsection(b) expires, the company continues to boycott energy companies, the state governmental entity shall sell, redeem, divest, or withdraw all publicly traded securities of the company...

Sec. 809.054. DIVESTMENT OF ASSETS. (a) A state governmental entity required to sell, redeem, divest, or withdraw all publicly traded securities of a listed company shall comply with the following schedule: [...]

The bill directs the state comptroller to create a list of companies and funds that “boycott” fossil fuel companies and allows the attorney general to take enforcement action against state funds that do not divest from the companies on the list.

Calling it, "the Biggest Problem Since the Great Depression," State Senator Jessica Bell has successfully sponsored SB 2291 to keep North Dakota from making insane, ESG-driven investments. The bill was signed into law by the Governor on March 23.

The opening text of SB 2291 begins with a prohibition against “social investment,” namely, ESG.

SECTION 1. A new section to chapter 21-10 of the North Dakota Century Code is created and enacted as follows:

As used in this section, "social investment" means the consideration of socially responsible criteria in the investment or commitment of public funds for the purpose of obtaining an effect other than a maximized return to the state.

In an attempt to “level the playing field between wind farms and lignite-fired electricity,” North Dakota lawmakers are also discussing legislation to impose a tax on unreliable wind generation.  Other legislation is aimed at electric reliability, and penalizing utilities for outages, with the aim of preventing future power blackouts. Another major fight is over Coal Creek, which at 1,100-megawatts is the largest coal-fired electric generating station in the state.

On March 24, Alaska joined with 13 other states in a lawsuit challenging the Avatar’s executive order to stop new oil and gas drilling leases on federal lands and waters.  Alabama, Alaska, Arkansas, Georgia, Louisiana, Mississippi, Missouri, Montana, Nebraska, Oklahoma, Texas, Utah and West Virginia are the other plaintiff states. During his first day in the Oval Office, U.S. President Joe Biden had issued an executive order to pause all oil and natural gas leases in the Arctic National Wildlife Refuge—just one day after the Interior Department of President Donald Trump issued nine leases to allow drilling in the Alaskan federal land.

As of December, multiple lenders, including Bank of America, Goldman Sachs, JPMorgan Chase and Wells Fargo, said they would no longer consider oil and gas investments in the Arctic.

Governor Mike Dunleavy announced in December, 2020 that his administration was introducing legislation at the start of the 32nd Alaska Legislature that requires state departments and agencies to end existing relationships and partnerships with financial institutions that have chosen to stop financing oil and gas exploration and development in the Arctic.

“We are the only Arctic state in the nation. For over 40 years, the United States has benefited greatly from exploration and development of our arctic resources,” said Governor Dunleavy.  “It makes no sense for Alaska to allow financial institutions to benefit handsomely from Alaska’s financial activities on one hand, while working against our interests on the other. Oil and gas exploration in the Arctic has created thousands of jobs and billions of dollars in revenue benefiting Alaskans and the country as a whole. . . If a group of financial institutions want to make a political statement with their investment strategy, that is their prerogative," Governor Dunleavy said in his statement announcing his plans. "But if Alaska does not have a robust oil and gas industry, our future is not bright."

In Indiana, House Bill 1191, authored by Rep. Jim Pressel has passed the Indiana House of Representatives by a wide margin, seeking to remove the power of local governments to place restrictions on public utilities based on the energy source of their services. The bill’s co-authors include State Rep Ethan Manning and State Rep Ed Soliday, chair of the House Utilities, Energy and Telecommunications Committee. An amendment to the bill also curbs university and college policies promoting “energy-saving requirements” in construction or renovation of buildings, saying that such steps can be taken, but only if it can see the return and savings within 10 years.

In Indiana, coal is the most widely used energy source followed by natural gas.  Natural gas use has been on the rise for businesses.  “Blue” cities across the country are pushing for electric-only buildings, some by banning natural gas, as part of crazy efforts to curb emissions of valuable CO2.  In the Indiana Senate the bill is sponsored by Senator Eric Koch and Sen Mike Bohacek.

This is existential for states, as North Dakota’s Senator Bell states. While the Avatar’s collective may be raining pennies down on people’s heads, via COVID “Stimulus” and “Rescue” legislation, many of our states rely on natural resources for hundreds of millions and even billions of dollars of state revenue from severance taxes and resource leases that fund schools and other basic services. These state revenues derive from both state lands, and federal lands within their borders. The impact of the City of London and Wall Street’s “green” finance, combined with Biden’s “green” energy policy, would be explosive.  Already, state and local funding is reportedly being slashed in states such as New Mexico, Colorado, North Dakota and Wyoming because of President Biden’s executive order to ban new oil and gas leasing on federal lands and waters. In 2019, those revenues from oil and gas production had contributed $1.37 billion to New Mexico and $669 million to Colorado, just for public schools alone.

Other large pension investors have also taken action to reduce their “carbon footprints,” have committed to transition their investments to “net-zero emissions” of CO2 by 2050. These investors, who include Allianz, the Church of England and the California Public Employees' Retirement System (CALpers), are all part of the UN convened Net-Zero Asset Owner Alliance. (Allianz SE, headquartered in Munich, Germany, is the world's largest insurance company, the largest financial services group and the largest company, according to a composite measure by Forbes magazine, made in 2014.)

...Assessing sustainability risks requires that investors have access to consistent, high-quality, and material public information... Given how central the energy transition will be to every company’s growth prospects, we are asking companies to disclose a plan for how their business model will be compatible with a net zero economy – that is, one where global warming is limited to well below 2ºC, consistent with a global aspiration of net zero greenhouse gas emissions by 2050. We are asking you to disclose how this plan is incorporated into your long-term strategy and reviewed by your board of directors… [emphasis in original]

In defense of our Republic—for which our forefathers and fellow citizens have shed so much in blood, sweat and tears—the ongoing mobilization of state governments and legislatures is part of a promising and potent response. Ride BlackRock, et. al, out of town on a rail!