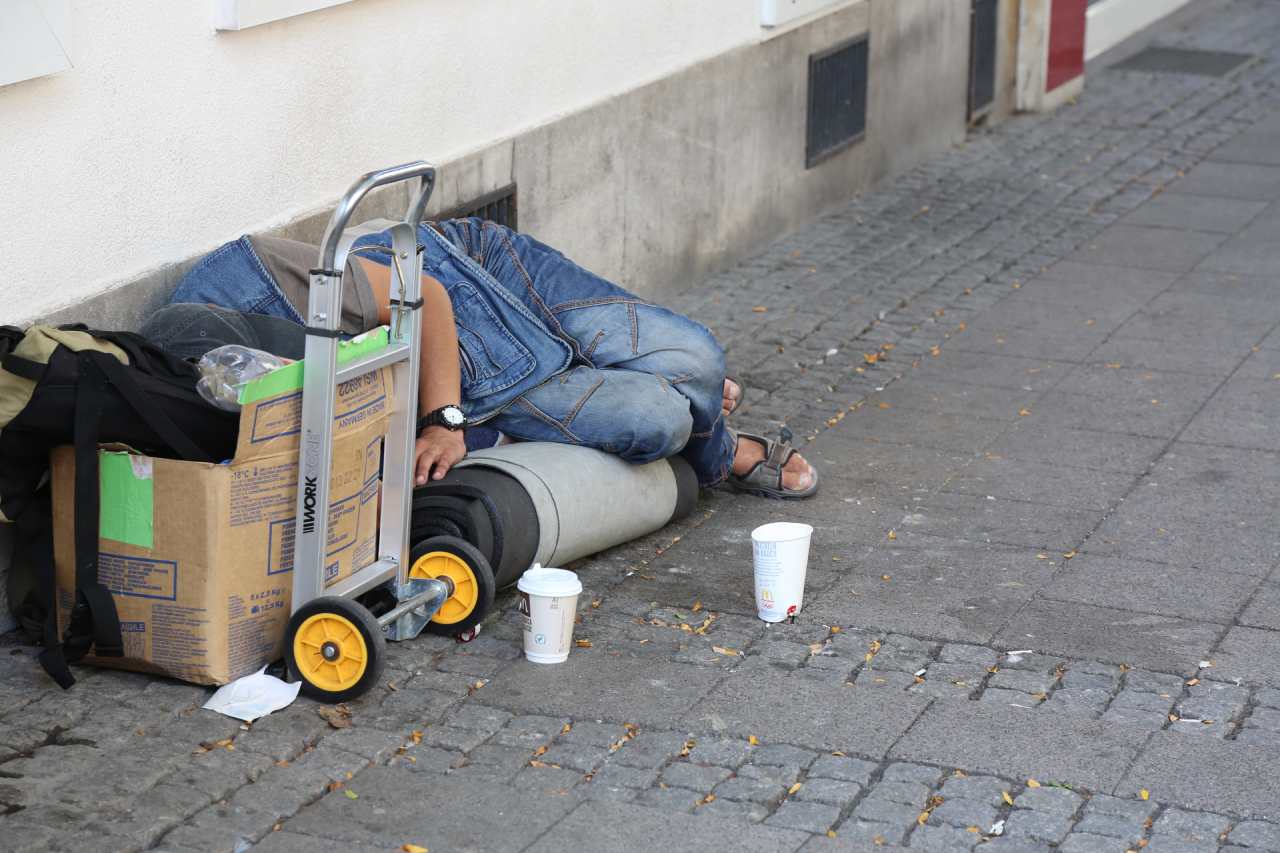 If you think that the simultaneous growth of homelessness in large sectors of our population and outrageous opulence among the privileged is unnatural, you are correct.  In fact, it is un-American.

Actual American methods of political economy, those invented by Alexander Hamilton, used by Abraham Lincoln to win the Civil War, and Franklin Roosevelt to win World War II, led to general upgrades in the productive powers of labor and a simultaneous upward pull on the general living conditions of all.  Economist Lyndon LaRouche fundamentally advanced these ideas.  He noted, decades ago, that un-American economic policies have been leading us both into economic collapse and into self-destructive and un-American wars.  It is time we stopped listening to the destructive siren song of the modern British Empire–its central bankers, London and Wall Street speculators, Washington retainers, and accompanying economist apologists.  It’s time to return to American methods of fostering progress.

As a nation, we make a very big mistake in attempting to base policy upon indices measured in money, such as adding up transactions into an index such as Gross National Product or giving undue attention to indices of prices attached to stocks or commodities.

Although it is easy for computers to calculate such indices, such measures fail to give much insight into the most important economic questions which cannot be directly determined in terms of money pricing.  That is because physical economies are dynamic. The most important economic measures are not precise but really only indicative of direction:  upward or downward—or even more important, upward, or downward at a faster or slower rate.  And most upsetting to those suckered into worshiping in the gold, or “hard money” rabbit hole, values are always fluctuating.

If we are making technological progress, we find that the power of money constantly advances in its ability to purchase products and services which were impossible to procure at any price just a few years before.  But if society degenerates into a collapse, money, gold, or other media of exchange become useless:  remember Shakespeare’s King Richard III, “My kingdom for a horse!”

How do we increase our potential relative population density—-and how does that idea work its way down to the situation of the individual, or individual entrepreneur, farmer, or firm?  How does society lift its potential population?

Fundamentally we must increase the ability of man and nature to produce what is required to raise life expectancy and physical output per person of society, so that society as a whole begins to produce a surplus relative to its requirements for mere subsistence.  The driver of that process is the development of individual creativity and insight.  The culture of an advancing society must produce minds which can discover new principles of nature and apply such discoveries to solving problems impeding the potential productivity of the individual.  Individuals discovered fire, plant seeds, water management techniques, the wheel, electricity, magnetism, relativity, etc. through millions of discoveries (great and small) across time.  Each discovery, when applied by means of better and better tooling and societal organization incorporating the newly discovered principles, lifts potential population to higher and higher possibilities.

As population increases over time, the increasing numbers of creative minds compound the rate of growth of population potential—even despite periodic catastrophes of various sorts.  Over time the tools and basic infrastructure of society and production become more and more complicated.  More and more division of labor is required to produce the complex systems and great works of infrastructure upon which advancing population potential depends.

If that were all there were to this question, there would have been no need for Lyndon LaRouche to have devoted his life to work upon this question.  The sticking point to scientific and technological progress is that each new discovery, when applied to society, changes all other relations within society to a smaller or greater degree.

First, every new applied discovery can be used for good or ill.  For example, nuclear power can cause the entire world to flourish based on a continuous supply of energy or, weaponized, can destroy human life as we know it.

More importantly, every new discovery, by reordering economic and social relations in society, instantly runs afoul of those oligarchs who prefer the status quo or worse.  They resist that which challenges their power.  While we could call such people the zero quotients, it were better to call them the negative quotients as they most commonly prefer retrogression to “no change.”  That is why LaRouche premised his call for an economic renaissance on the accompanying necessary elimination of the power of the modern British Empire and its control of the world’s financial system.

Now that Empire is engaged in a drive to shut down all modern forms of energy in favor of a return to feudalism.   Every industry, from farming, to auto and aerospace, to mining and drilling has been targeted for destruction. Lies, slander, “education,” litigation, taxation, obfuscation, bureaucratic procedures, are all used to prevent application of new technologies to develop the U.S. and the world.  President Trump made some headway on some of this, but the current Biden collective along with the globalists, central bankers, and British Imperial hangers-on have moved to turn back even those gains and to crush any memory of the American System.  That is what their Green New Deal and “Build Back Better” is all about.

More and more Americans from diverse political backgrounds have begun to see that a change in trajectory is urgent.   Restoring American methods to this economy means returning to the credit system of Hamilton and Lincoln rather than continuing to endure the looting of the physical economy promoted by London and Wall Street.

This, obviously, is the obverse of the half measures of repairing old highways, creating a permanent welfare state, or simply throwing bundles of money to your friends for purposes of buying the 2022 vote as envisioned in the Biden bills now before Congress. Their plan, after all, is appropriate to a colonial satrapy functioning at declining population and production levels under an all-seeing surveillance state put there to ensure that the “underlings” don’t get out of control.

President Trump, by contrast, called for the United States to become a full set industrial power again, capable of producing all the population’s needs internally, rather than depending on foreign nations to provide them in “just in time” supply chains.  We would use our modern infrastructure platform to ensure this industrial renaissance.  The “just in time” supply chains which have completely broken down under the conditions created by COVID would be replaced by dependable American production of essential goods. “Just in time” or “Just Squeak By” has left us with no raw steel production, collapsing oil and gas, an aging productive workforce, and millions of poorly qualified potential new workers.

Like the Jesse Jones regime at FDR’s Reconstruction Finance Administration, the new National Bank will have to prioritize projects to lay the foundation for the most rapid growth while not exacerbating shortage problems to the point of creation of massive inflation. Credit should initially target steel, power, water, machine tools, and semiconductors—with training programs to develop competent workforces in all of these areas.  Since we are in a hole, we must initially target rapid expansion in the areas which will have the greatest and quickest impact upon the economy.  For example, the relatively simple effort to construct proven low power atmospheric ionization systems for production of rain systems should be quickly and massively introduced in California and the Western states. Similarly, the DOE and National Bank should pick the 2 or 3 best small modular nuclear reactor designs and get to work on factory mass production of the modules for deployment across the country.

As gaps in our productive powers begin to be closed, we will have more resources to apply to large projects, like the NAWAPA project (re-supplying river and water supplies for the West) and national high speed rail mega-projects.  As progress accelerates on the national projects, we can also offer more and more credit to new entrepreneurs with good plans and established firms looking to produce improved “regular” products and revolutionary new products.

Within a year or two of the initiation of this program, and as production begins to pick up, a percentage of the SMRs and machine tools should be financed for export to nations still having trouble getting on their feet.  The success of American exports, and the success of our customers, will be highly dependent upon reestablishing a fixed exchange rate, gold reserve-backed international monetary system to inhibit the imperial speculations against currencies.  That is beyond the scope of this post, but this is another American horizon objective like the colonization of the Moon and Mars.

In the American System, we begin with our physical objectives and our existing knowledge, resources, equipment, and people.  We match the four together with credit to allow the maximum flourishing of the creativity and productivity of our people.  In the process we lift our people and people around the world.  Nothing could be further from the rotten legislation presently before the Congress.