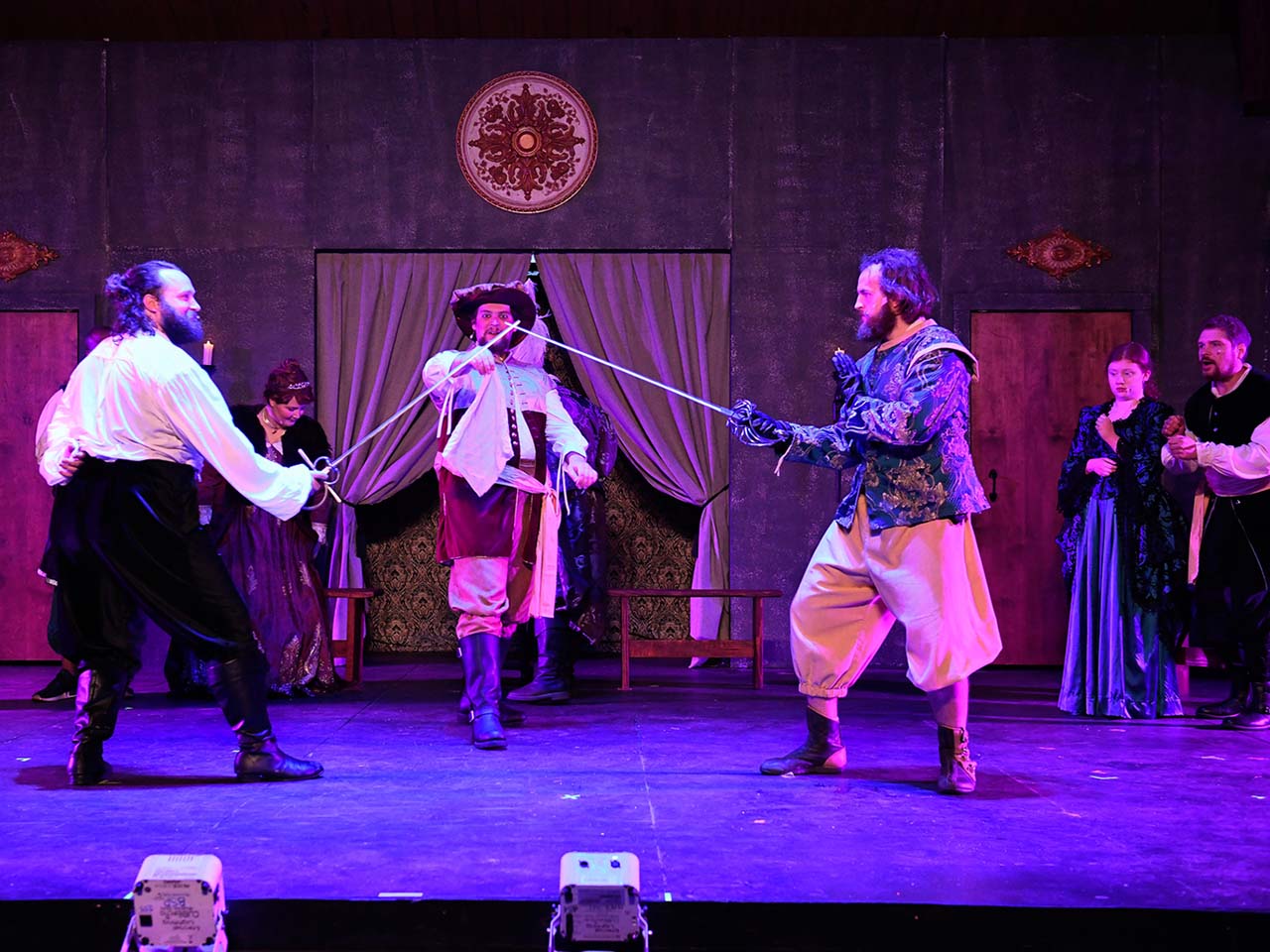 A scene from Shakespeare in the Shade's November 2021 performance of Hamlet.

It was by pure chance that my husband and I had the opportunity to recently attend an excellent performance of Shakespeare’s “Twelfth Night” in Harris County, TX, Precinct 4.  I describe the location as such because sponsoring performances of Shakespeare in the Precinct has been a tradition of County Commissioner R. Jack Cagle since 2013. Due to a recent redistricting, our neighborhood is newly located in his Precinct. This struck me as a very remarkable tradition for a current “politician.”

According to the website of their Troupe: “Shakespeare In The Shade presents classic plays to entertain, enrich, and educate the people of Harris County, while serving to grow the Gulf Coast region as a cultural-tourism destination. Commissioner (Jack) Cagle enjoys Shakespeare and sees the value of theater arts as being important on a level of education, quality of life, and even economic development in Precinct 4.”

From discussion with one of the stagehands afterward, we found out that the staging and costumes are financed through a budget from the County and the actors and actresses are paid through a group in the Precinct called, “Fun 4 Seniors.” Because he was campaigning in his newly re-districted Precinct, Commissioner Cagle was not able to play the Spearholder #2 and read the prologue of the play in the performance we attended, but that is what he typically does. Can you imagine the impact if this quality of leadership became the norm in our neighborhoods throughout the nation?

In addition, finding a Shakespeare production these days that is not completely perverted by the ego of the director is itself very unusual. Add to that, the plot of this particular play. “Twelfth Night, Or What You Will,” involves the shipwreck of twins Viola and Sebastian who are then separated and believe the other has drowned. Ensuing is a riotous unfolding of comedic events due to Viola disguising herself as a boy, Cesario. Viola falls in love with the Duke Orsino, who himself is in love with Countess Olivia.  As part of wooing the Countess, the Duke directs Cesario (Viola) to bring his desires to the Countess, who herself falls in love with Cesario, who she believes is a man. The plot unfolds from there with much mirth and many twists and turns in the play. With such an opening plot, one can imagine how the “woke culture” could have a field day with such gender fluidity. However, this performance completely hung on simply presenting the play as Shakespeare had intended!

As is notable in all of Shakespeare’s plays, he gives the audience an insight into the arbitrariness of life in the system of Kings, and Queens, and Nobility. If you are of the upper caste, you are born with privilege and power over those of the lower class. In the comic subplot, the Uncle of Countess Olivia, Sir Toby Belch (just as his name suggests, a drunk and indulgent lout) conspires with wealthy Squire and fellow drunk, Sir Andrew Augecheek, and with various fools and peasants to set up the pompous steward of Countess Olivia, Malvolio (who himself loves the Countess) in an intrigue which leads to his jailing.

By the portrayal of the various characters, Shakespeare draws your imagination into the absurdity of typical Court life. As often happens in Shakespeare, it is the so-called fool, Feste, who is the voice of reason. Throughout the performance, Feste, played by Mari Tortorice, an accomplished singer, adds the element of music. As Feste says, “Better a witty fool, than a foolish wit.”

Of amazing note also, in this performance, was Heba Toulan who played the Countess Olivia. She is deaf. In speaking with the Director’s wife after the play, we learned that Toulan is very accomplished and performed the role of one of the witches Hecate in “MacBeth,” another of their performances. As the Countess, she performed with signing for the deaf as well as her acting interpretation. Apparently, many of the other actors and actresses, such as the wonderful actress who played Viola, Helen Rios, learned signing enough to sign while they were speaking their roles!

After the play, we were able to speak with the Countesses’ Attendant, played by Mayuri Patel. She is a neuro-science major at the University of Texas Medical Branch, but along with that, acting and public speaking have become her passion. She explained to us, that the Director wanted her to say the lines for the Countess, with the passion as if she were the Countess while the Countess would act them out.  Once you realized that was what was happening, it worked beautifully! It leads you to ponder the power of the mind—the ability to impart, while the audience receives, powerful concepts, all as the actress doing this is conquers a physical disability.

Later this summer they plan a reading of the Greek play, “Antigone.”  They have scheduled a performance of “Henry V” for the fall.

Kudos are due to the entire company and staff involved in this production. This post certainly does not do them justice—as I have not named them all nor fully detailed their great team effort.  However, our greatest thanks go to the Commissioner himself. His unique foresight about the importance of Shakespeare and classical drama reminds one of the kind of statecraft that has shaped the best of America since our inception as a nation. Lincoln, for example, was a Shakespeare devotee—studying his tragedies and the histories, and reciting sections of the plays to his cabinet during the Civil War.

Those who live in the precinct will hopefully take note of this surprising community-inspired presentation of great drama when they vote for Commissioner in Precinct 4. It is precisely the antidote we need to the present cultural morass.