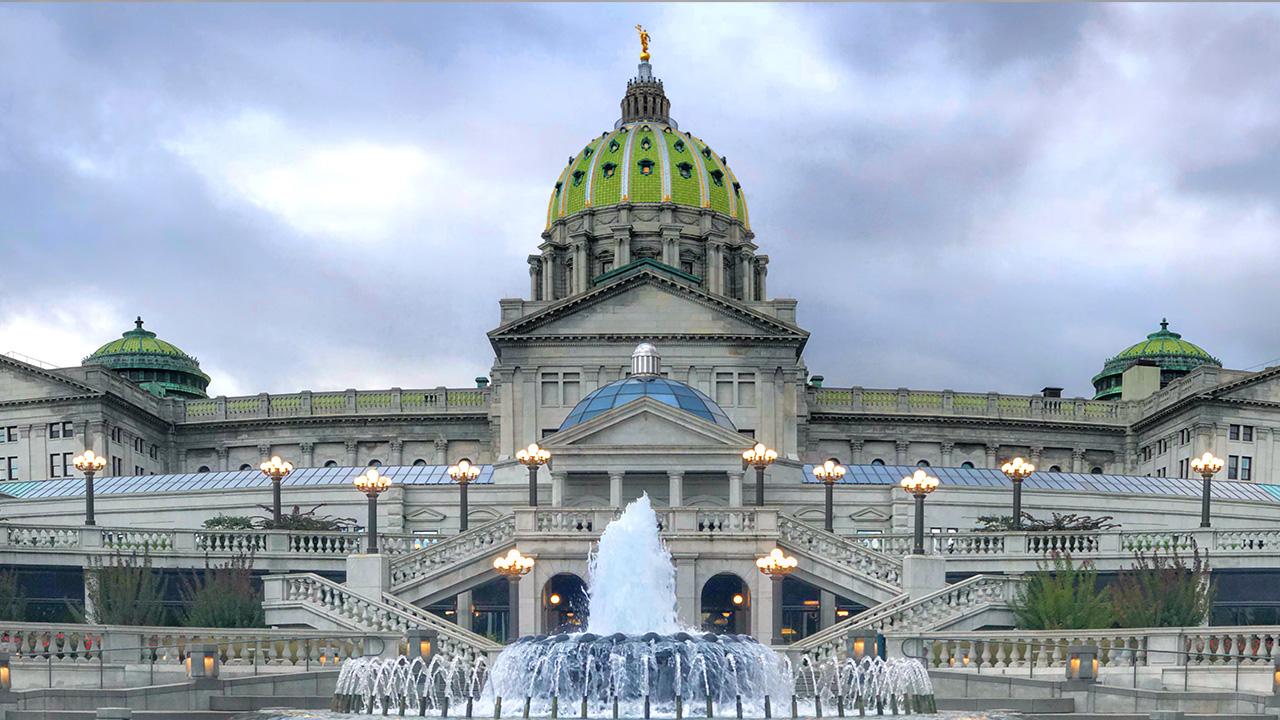 Citing constitutional authority, Pennsylvania State Senator Dr. Doug Mastriano announced Friday, November 27, that he is organizing a joint resolution in the state’s legislature that will put forward Trump presidential electors in competition with the Biden electors that Pennsylvania’s Secretary of State recently certified.

Mastriano’s announcement comes on the heels of the November 25 highly publicized hearing in Harrisburg, Pennsylvania, hosted by the Republican Senate Majority Policy Committee, on the vote fraud/irregularities that have been found in the Pennsylvania election. The hearing, chaired by Senator Mastriano and attended by the Senate Majority Leader and 26 other members of the Senate and House, heard testimony from Trump lawyers, Rudy Giuliani and Jenna Ellis, and from nearly two dozen eyewitnesses and forensic analysts that gave testimony, in excruciating detail, of the many ways the vote was packed, rigged, and stolen in Pennsylvania’s election.

Toward the end of the more than three hours of testimony, the issue of what could be done to redress the wrong of a stolen election was addressed by the President’s lawyer, Jenna Ellis. She urged the legislators to put aside, for the moment, the issue of making corrective legislation for future elections, and instead focus on taking the constitutionally authorized actions that would provide a solution for the immediate crisis. Ellis told the legislators:

“The Mayor has suggested one possible remedy [decertify the illegal votes]; there are others, and you could call for a special election; still, you can direct the manner of your electors. You have a variety of constitutional options, but one option should not be to ignore it and to certify a corrupted, irredeemably compromised election….

“What we want to make sure of is that we the people get to select our preferred Commander in Chief, and you have the obligation and the responsibility to ensure for the people of Pennsylvania that that occurs.”

In response, one of the legislators asked if, because the legislature had already put the form of the election into statute, they had not given away their constitutional prerogatives and delegated their authority to others?

Both Ellis and Giuliani answered the question, citing Article II, Section 1, of the U.S. Constitution, to assure them that the legislature has the authority to take that power back into their hands again, if they believe that the state’s executive branch had abused those delegated powers, and the legislature did not have to wait for any court to authorize them to do it.

When the hearing was over, President Trump, who had called in to address the 200 participants by phone, brought in a number of the legislators to the White House to discuss strategy. The mainstream media of course howled like hyenas, just as they had the previous week when Trump had brought into the White House the leadership of Michigan’s state legislature to discuss strategy with them.

A Republic Not a Democracy

The mainstream media discussion of this Trump team strategy to establish slates of alternate presidential electors in the swing states is usually accompanied by wild cries of “unprecedented,” and “illegal,” neither of which are true. We discuss here the historical precedents and the constitutional justification that can counter those lies.

There does arise a genuine concern in any discussion of substituting legislature-approved electors for the electors who might be otherwise certified by the state executive branch in the customary manner in an honest election. We can imagine many Biden voters sincerely distressed by the idea that their votes, their direct voice in the government, would be diminished by such a tactic.

To answer the concerns of those voters, it is critical that there be much public discussion on the topic. It is now time for leaders across the country—regular readers of this website, in particular—to come to terms with why America’s Founding Fathers established a republic, not a democracy. And, in that spirit, why they gave to state legislatures the sole authority to appoint all of the state’s presidential electors. In addition, the President’s showing of the outright fraud in this election must meaningfully break through the current media blackout and be the subject of discussion at every dinner table.

“Each State shall appoint, in such Manner as the Legislature thereof may direct, a Number of Electors, equal to the whole Number of Senators and Representatives to which the State may be entitled in the Congress.”

Today, because state legislatures have established a customary procedure of allowing direct votes to decide electors, and because there has not been a disputed election since 1876, Americans seem shocked to find that our founders created a constitutional republic, not a pure democracy. We need a deep dive into U.S. history here.

The first question that comes up in discussing why a republic?, is the familiar question: why have a Senate structure that allows for disproportionate representation for American voters; and, then, we have the second, related question: why have an electoral college used for the presidential election that gives disproportionate weight to voters in the small states because electors are selected according to each state’s number of senators plus total members of Congress.

Their ideal, regardless of their “confirmation” strategy, was, from the beginning, the ancient Greek ideal of Plato’s republic. And it was the lesson of the failed Greek experiment in pure democracy—where, after all, the Athenians had voted, in a democratic fit of passion, for the execution of Socrates—that guided their horror of the “tumult and disorder” of pure unchecked democratic rule.

Alexander Hamilton wrote in the Federalist Papers of 1788, as to why a republican, state-based electoral college system was preferable to a nationwide system of election in a direct democracy:

“It was peculiarly desirable [in the proposed Constitution] to afford as little opportunity as possible to tumult and disorder. This evil was not least to be dreaded in the election of a magistrate, who was to have so important an agency in the administration of the government as the President of the United States. But the precautions which have been so happily concerted in the system under consideration, promise an effectual security against this mischief. The choice of several, to form an intermediate body of electors, will be much less apt to convulse the community with any extraordinary or violent movements, than the choice of one who was himself to be the final object of the public wishes. And as the electors, chosen in each State, are to assemble and vote in the State in which they are chosen, this detached and divided situation will expose them much less to heats and ferments, which might be communicated from them to the people, than if they were all to be convened at one time, in one place.”

The Founders did not foresee the emergence of two dominant, stable political parties, which usually results in little contest amidst the members of an individual state’s slate of electors, in themselves; therefore, the Constitution was largely concerned with the provision for the case of many competing candidates, where, in their discord among themselves, none were capable of gaining a majority vote at the national meeting of the Electoral College. The Constitution provides a solution in case of such discord: everything is thrown into the House of Representatives, where the members will decide.

But this backup option of a House vote determining the choice of President, works as well for deciding between two dueling slates of electors where each slate represents one of two major parties, just as it does for deciding between multiple squabbling candidates that have no clear majority between them.

In fact, the last time that a conflicted electoral college vote was thrown into the House of Representatives for resolution was in the Tilden/Hayes election of 1876, where three states sent two competing sets of electoral slates to be confirmed by the House, each slate representing one of the two major political parties. This is similar to what would happen today were Republican legislators in swing states to offer up competing slates of electors to those officially certified by Democratic governors.

Fortunately for the Trump campaign today, the Constitution demands that the vote for President in the House be done by each individual state having only one vote. And, because each state’s vote is decided by which party has the majority of House members in the state’s delegation, with a tie number forcing the state to abstain from voting, in a House vote taken in the next, post-election Congress, Trump would win 26 states to Biden with 22 states, a decisive victory for Trump.

In the fight for this victory for Trump, we see among these legislators a quality of soul searching not seen among politicians for decades, perhaps a century or more. They are being confronted with fundamental questions concerning the genius and the morality embedded in the U.S. Constitution; they find themselves tasked with writing a chapter in a new edition of Profiles in Courage.

It is that production of a different kind of politician that reveals, in fact, the essence of the meaning of a republic. It is not just a negative definition, i.e., the negation of mob democracy. A successful republic depends on the rise, out of the cauldron of the political fray, a quality of leadership that is not just defined by the politician’s usual search for a majority of votes.

If the Biden voter of good will is able to appreciate that definition of republic, and resist clinging to the dirty dishpan of a tainted election, then he will help us to make the U.S. electoral system and its underlying republican structure, once again the marvel of the world.