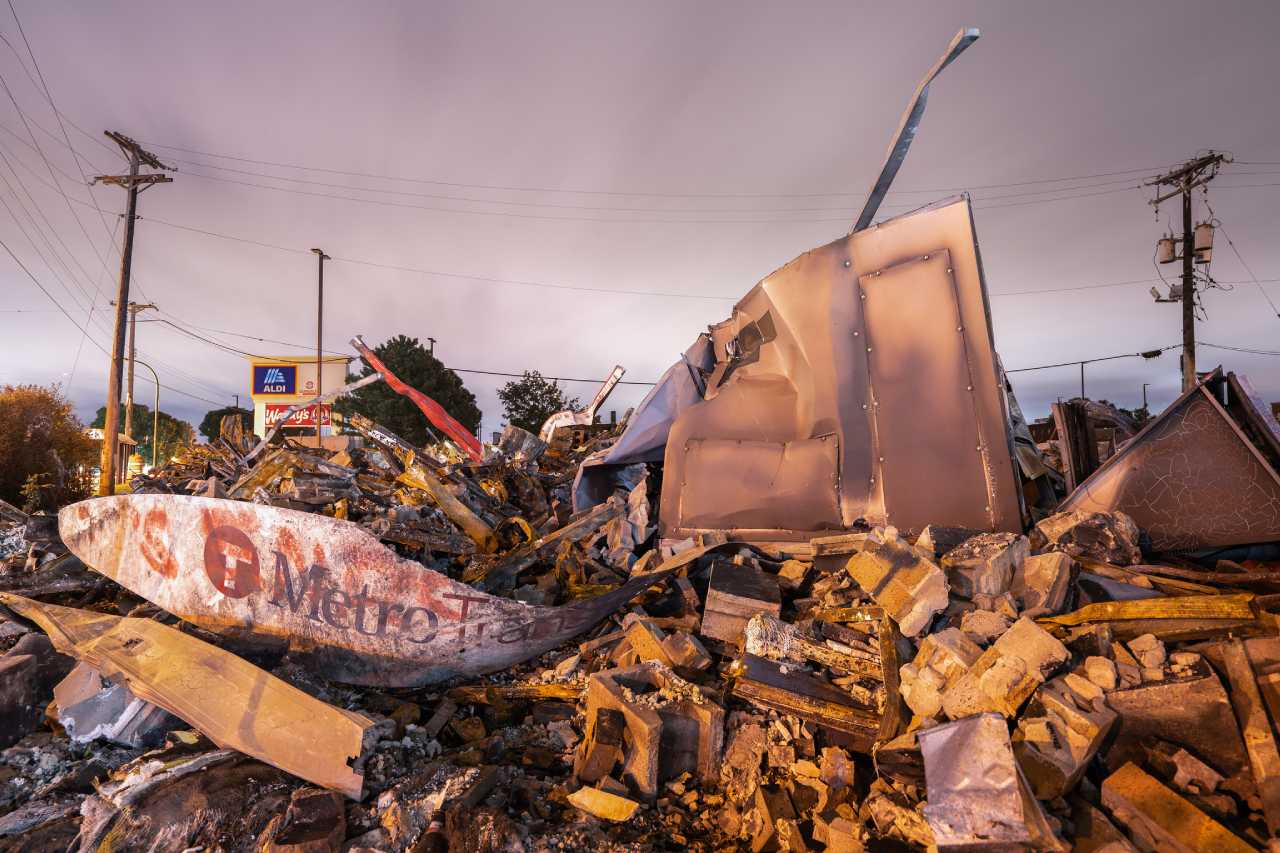 Rubble from the Autozone store, the store was the first to burn during unrest over the murder of George Floyd by the Minneapolis Police. 06/10/20 Photo: Chad Davis / Flickr / CC BY-SA 2.0

Our nation is on political fire. The Democrats, in the final stage of their 1960s Cultural Revolution, have brought their Dionysian Satan worship to the fore in the nation's classroom, boardroom, and Capitol. They have corrupted our elections, indoctrinated and drugged our children, and now hope to bribe the most desperate and forlorn of our citizens into accepting totalitarian rule. The Republican turtles, like Mitch McConnell, hiding in their shameful shells, openly betray the American people, our Constitution, and our future, as they worship at the money-altar of Baal, selling out our nation to globalist corporate fascists.

For our nation and our people this is nothing new. Many of us remember the Bush-league Republicans who charged forward after 9-11, tore to pieces our Constitutional rights, and sent our men and women to fight and die based on Cheney's “big lie,” while the military-industrial complex made billions in profits, killing millions of people. And all this to put our nation into trillions of dollars of national debt,—and yet they had the arrogance and disrespect to call it the “Patriot Act" and “Operation Freedom.”

Then there is Obama's messianic cult, which has continued to this day, but now apparently under the guise of outdated boomer-wannabes, wearing Hawaiian shirts and “still smoking the doob.” This synthetic cult has given us ongoing perpetual bailouts via the Federal Reserve for apparently underprivileged billionaires around the globe, plus massive drug legalization to kill millions of Americans to the point of lowering life expectancy. It has launched endless wars while supporting the very terrorists our children were asked to fight, created the worst anarchistic culture of violence our nation has ever seen, recklessly opened our borders for cheap labor and slavery, delivered weapons to the cartels and slaps on the butt to Wall Street for laundering the drug-money, and then, to ensure that they control the narrative of indoctrination, openly collaborated with big tech oligarchs to censor independent voices and control all political discourse in a way that would make Joseph Goebbels proud.

Our nation, as it exists today, would be unrecognizable to the patriots who fought and died in World War II.

While the freedom to speak the truth still exists, it must be stated clearly and without compromise, that our leaders in nearly every institution, from public health and academia, to the Pentagon and major corporations, have been recruited to a death cult intending to destroy Western Civilization. The fact that we are harvesting organs of newborn infants leaves no doubt as to the intended future.  Neither does the devastation of de-industrialization, the opioid crisis, the human trafficking at the border, the endless wars, and the suicide rates, especially of veterans.

We have a priesthood of quackery that dominates all facets of our Civilization. These “experts” dare call CO2 a poison, and worship “lower consumption” and depopulation. This apocalyptic priesthood believes that ending all hydrocarbon and nuclear energy will create economic growth, when in reality this cult has committed the greatest genocide on our planet over the last 50 years with their ridiculous dogmas, either killing, or preventing from coming into existence, billions of sacred human beings and their contributions to the future. It is as if Jonathan Swift’s Island of Laputa was written for our scientific community today.

If we are to restore our nation, and bring creative and moral life back to the foundations of our civilization, we will require a political organization that no longer tolerates this betrayal of human dignity. This is what we are asking you to help create.

Our Republic requires a spiritual rebirth; Nothing less will suffice.

In 2016, Donald Trump reawakened the sleeping giant of the true America, the very same giant the Japanese admirals reluctantly awakened on Dec 7, 1941. This same giant was again brought to its feet on the evening of Nov 3, 2020, when our elections were blatantly corrupted and our nation placed in immediate peril. As we did in 1941, we must again create the foundations for a revival of the great American system.

Abraham Lincoln founded the Republican party under similar crisis conditions and for this same purpose: a spiritual rebirth of devotion to our nation's founding principles,

In the 1850s, the British system of slavery and free trade was killing the newborn Republic. The Revolutionary War generation had passed away, and with them, the living memory of that "Principle of 1776." By the Dred Scott decision, the nation was either soon to perish as all slave, or we would be reestablished in living principle, as all free. Lincoln, recognizing the crisis, even though not yet President, acted to bring about a national resurrection through his personal leadership.  Between 1854 and 1860, as he created the revolutionary Republican Party, Lincoln had no “official” authority—only that of a free American citizen. He took responsibility upon his own broad but humbled shoulders to address the profound moral crisis of his time. So must we today.

It was another great American citizen, Lyndon LaRouche, who brought this same sense of Lincoln-like devotion to many millions of Americans during the tragedy of the last five decades. LaRouche, often left alone in the arena against the hyenas of media, law, and academia, defended our rights as Americans and as people, to grow, to develop, and to prosper. Today, our nation depends on the heroic actions of such citizens, for such is a Republic.

It is now time we honor our ancestors and their sacrifices, as well as the many who have sacrificed much during these last decades of devastation. It is time we pay proper devotion to the true Temple of Liberty after years of vandalism and neglect. This is what Donald Trump has inspired within the American people.

Let us reclaim our nation's heritage, remove the corrupt traitors from Lincoln's Republican Party, and make it once again an instrument for the revival of those self-evident and sacred principles.

When the oligarchs controlling both parties blatantly expose their involvement in a fascist coup, as we saw during President Trump's first term; when these same oligarchs for decades work to eliminate American production, education, and our God given rights; when our corporate, political, media, academic, and even medical figureheads daily express vile contempt for our liberties, our children, and our sacrifices, there comes a time when we must either “hang together or hang separately.”

By hanging together, by uniting all Americans under the cause of our Declaration of Independence, and reigniting the powerful forges of the American System of Economics, we will restore the true America.

We shall extend an olive branch to those Americans who have fallen prey to the media’s divisive tactics. We will offer all Americans–of all races and creeds; of all party-affiliations–an opportunity to unite to rebuild our nation. We will open the doors to our enemy’s greatest fears, and once again, like Lincoln, build a strong Union, Devoted to Principle, and to real economic growth, because we are creative human beings who accept no limits.

For a nation united cannot burn.