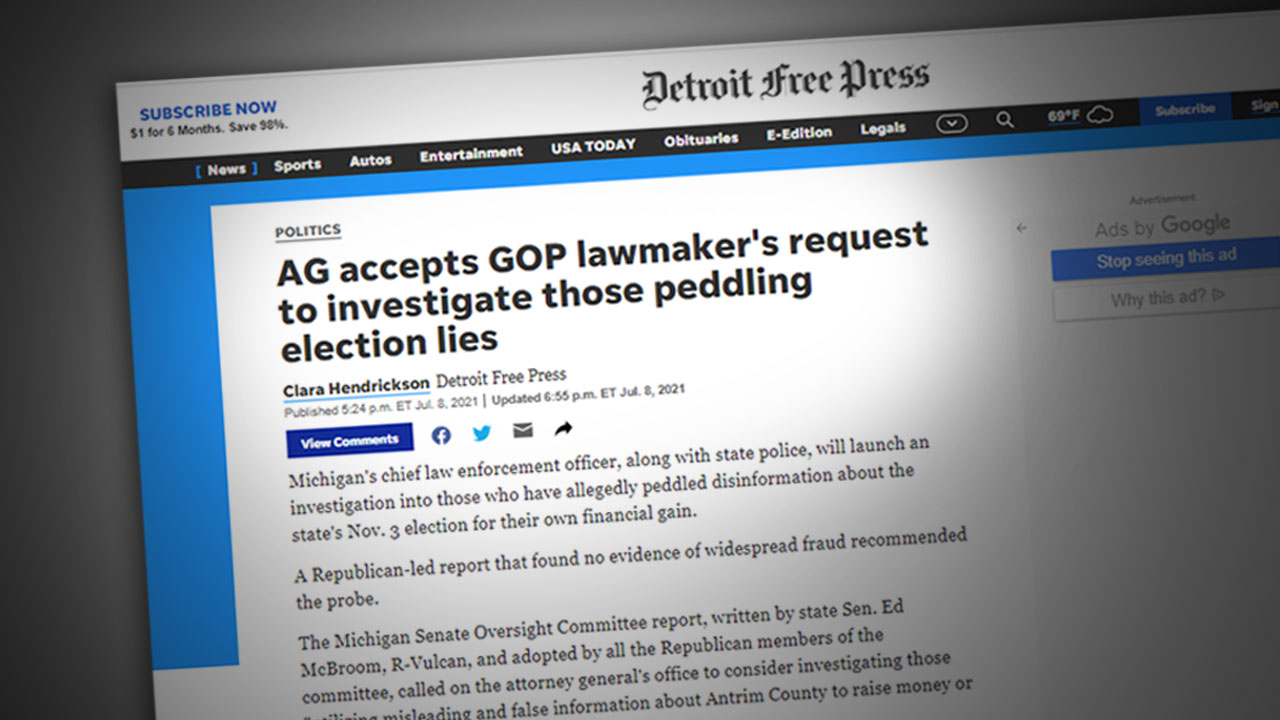 Just as President Trump announced a historic class-action suit against Big Tech’s suppression of freedom of speech, Michigan’s new “odd couple” demonstrated why such an offensive is needed. Dana Nessel, the radical Democratic Attorney General of Michigan, embraced the recommendation of Republican State Senator Ed McBroom, Chairman of the State Senate Oversight Committee, and announced on July 8 that she will be using Michigan’s State Police to investigate Michigan citizens who are fighting to expose the fraudulent 2020 election. The hyper-liberal Detroit Free Press celebrated this with the headline, “AG Accepts GOP Lawmaker’s Request to Investigate Those Peddling Election Lies.” This is the newspaper that, last January, devoted an entire page to publishing the pictures of Michigan elected officials who supported President Trump’s claims of vote fraud, under the Orwellian headline, “The People of the Lie”!

McBroom and two other so-called Republicans on the Oversight Committee released a report on June 23 announcing that their investigation had found no evidence of vote fraud in Michigan. That wasn’t much of a surprise, since they refused to take testimony from anyone who actually had evidence of vote fraud or violations of Michigan election law. But for whomever is pulling these legislators’ strings, that was not sufficient, and the report called on AG Nessel to investigate those “utilizing misleading and false information about Antrim County to raise money or publicity for their own ends.” So now, in the state of Michigan, if one “publicizes” about vote fraud “for their own ends”—whatever the hell that means--one can expect the state police to come knocking on the door?

The Michigan Uniparty has badly miscalculated. Trump’s class action suit in defense of the first amendment has the potential to be a game changer. His base has been re-energized by his “return to the people” rallies in Ohio and Florida, where LaRouchePAC organizers encountered a passion to save this nation that continues to deepen.

The Nessel-McBroom dalliance has kicked the patriotic forces in the state into high gear. One of the obvious targets of Nessel investigation, former State Senator Patrick Colbeck, who was at the infamous TCF Center in Detroit the night of the election and who has been at the forefront of the election integrity fight, launched a petition, calling for the Michigan GOP to censure Senators McBroom, and the other two “Republican” members of the committee, Lana Theis and John Bizon:

With this declaration, the Committee has declared the constitutional rights to freedom of speech, freedom of the press and freedom to seek redress for our grievances to be null and void. They are asserting that anyone who disagrees with their flawed assessment of the election particularly in matters regarding Antrim County should be investigated by the Attorney General. They have in fact weaponized the state against citizens who disagree with them (emphasis added).

Rescue Michigan, another group which has been heavily involved in the election integrity fight, is circulating a resolution for the resignation of McBroom, stating:

Attorney General Dana Nessel is a partisan lunatic with a history of abusing her office for political witch-hunts. Yet instead of investigating her abuses of authority, the Michigan Senate Oversight Committee, chaired by Ed McBroom, called upon her to launch another, and now Dana Nessel has taken up his offer....Not one word of the 35-page Senate Oversight Committee Report on the November 2020 election alleges any facts to support a claim that anyone used “misleading and false information about Antrim County to raise money or publicity for their own ends.”

Other organizations are mobilizing to demand that the Michigan Republican Party line up on the side of the U.S. Constitution and Donald Trump. Whichever way the state party responds, the Nessel-McBroom assault on the rights of Michigan citizens may turn out, for the elites, to be “bridge too far.”