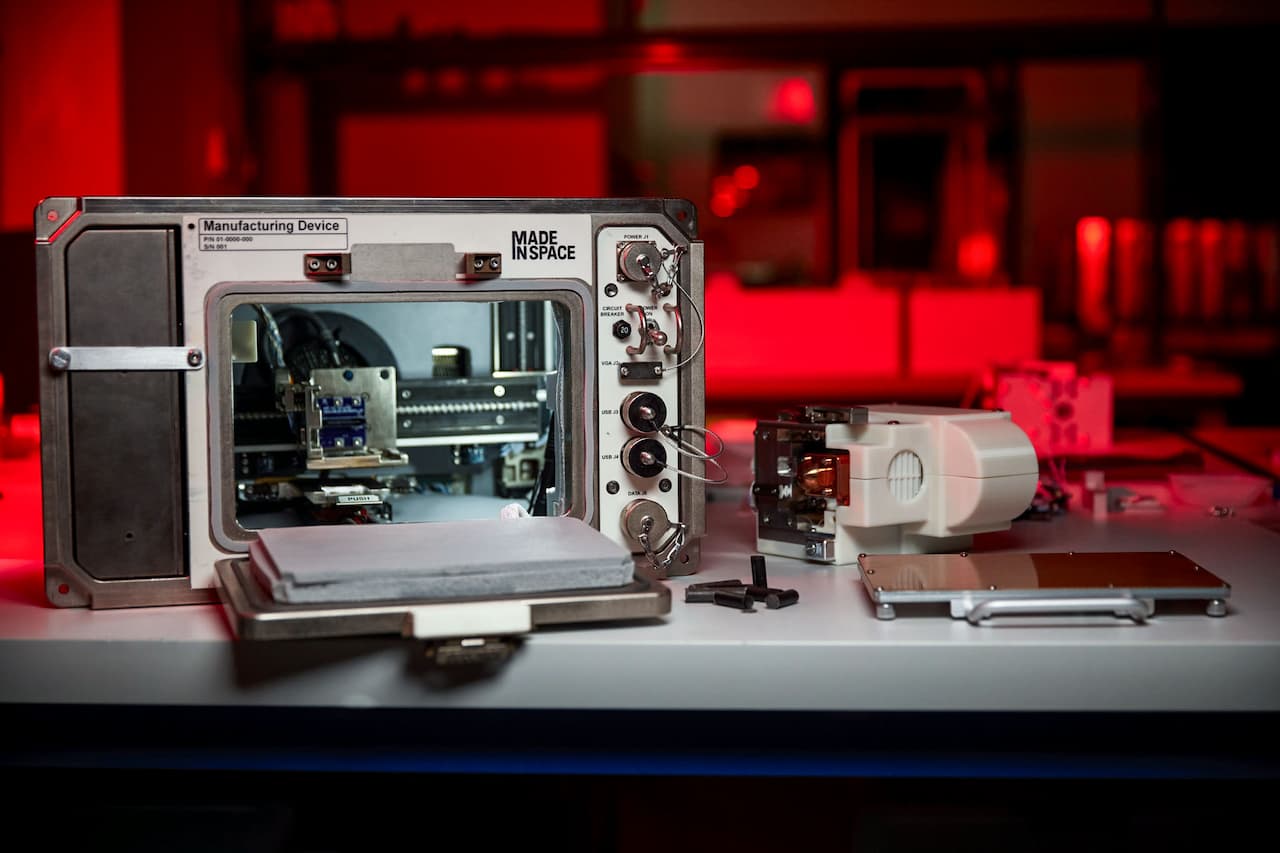 The Redwire Regolith Print facility suite, consisting of Redwire's Additive Manufacturing Facility, and the print heads, plates and lunar regolith simulant feedstock that will be launching to the International Space Station. 2021-07-22

Once again during his rally on April 23rd in Ohio, President Trump repeated his aim to not only rapidly return American astronauts to the Moon, but to ensure that American astronauts are the first to land on Mars. Despite all the ongoing destructive measures taken by the Biden collective, some important aspects of progress continue.

Many companies are involved in developing 3D printing applications for propulsion systems and building permanent structures for a lunar base to enable a sustained presence on the Moon. The advancement in additive manufacturing (AM), and 3D printing technology will have an even greater impact on improving our productive economy here on earth. During his Presidency, Donald Trump signed an executive order to support the mining of resources on the Moon. The development of 3D printed buildings and shelters on the Moon will both enable the mining of water, ice, and other lunar resources needed for expanded space exploration, and spinoff technologies for manufacturing here on earth.

Some examples of advances in AM and 3D printing include Relativity Space’s Stargate printers—the world’s largest metal 3D printers that built the world’s first 3D printed rocket, the Terran1, and the world’s first fully reusable 3D printed rocket, the Terran R. NASA has also developed an all-new metal 3D printing alloy containing nanoscale oxide particles specially designed for use in high-performance aerospace systems. This material can reportedly withstand temperatures of over 1090°C (2000°F). The Texas based 3D printing company ICON’s Project Olympus was selected by NASA to build an off-world construction system for the Moon.

One of the leading propulsion system manufacturers, Aerojet Rocketdyne, is also  making huge breakthroughs in Additive Manufacturing, 3D Printing. The company has a long history in metal AM and has invested more than two decades into leveraging this important technology. It has focused most of its energies on laser powder bed fusion (LPBF). This is a cutting edge additive manufacturing technology which has many different applications.

Powder bed fusion is one of seven additive manufacturing techniques, in which either lasers, heat, or electron beams are used to melt and fuse material together to form a three-dimensional object. Aerojet Rocketdyne has integrated 3D printing in a number of projects—including engines produced by the company that are being used to power NASA's Space Launch System, SLS core stage. A single RL10 rocket engine will power the Interim Cryogenic Propulsion Stage during the first uncrewed test flight of the Artemis1 mission. Four RL10 engines will support the more powerful Exploration Upper Stage that is being developed for future versions of SLS.

In 2017 Aerojet Rocketdyne announced a successful hot-fire testing of a 3D printed thrust chamber for its RL-10 rocket engine, as well as a successful testing of its 3D printed ARI Propulsion system. The RL-10 has played a vital role in placing hundreds of military, government, and commercial satellites into Earth's orbit. The RL-10 has powered missions like Voyager 1 and Voyager 2—the first two spacecraft to reach interstellar space.

The largest order of Aerojet Rocketdyne’s 3D printed RL10C-X rocket engines was recently placed by United Launch Alliance. The contract between the two companies calls for Aerojet Rocketdyne to deliver 116 of its partially 3D printed RL10C-X engines to ULA for use in its new heavy lift Vulcan Centaur rockets. The company’s original rocket engine, the RL10, was first introduced nearly 60 years ago in 1963. During that time span more than 500 RL10’s have been launched into space, and the engine currently powers the upper stages of ULA’s Delta IV and Atlas V Rockets.

Additive Manufacturing technology has recently also been used by Aerojet Rocketdyne in its scramjet-engine-powered-hypersonic-cruise missile trial—as part of a U.S. hypersonic missile research project. The company 3D printed the propulsion system, which allowed them to be able to construct it using 95% fewer parts than were needed to build the Mach 5-capable U.S. Air Force X-51A Waverider.

Additive manufacturing, 3D Printing technology, has the potential to totally transform productivity in many areas of our national economy—from industrial development, medicine, manufacturing, space, and much more. These are just a few examples of the many uses and applications of 3D printing being developed.  If fully deployed in a renewed national science driver mission as we saw with the Apollo Project, we could achieve even greater economic returns than seen then –returns in the form of increased productivity in new technologies developed by NASA and private firms, as well as new jobs and factories right here in America.  This could truly return America to the status of a manufacturing and industrial superpower.