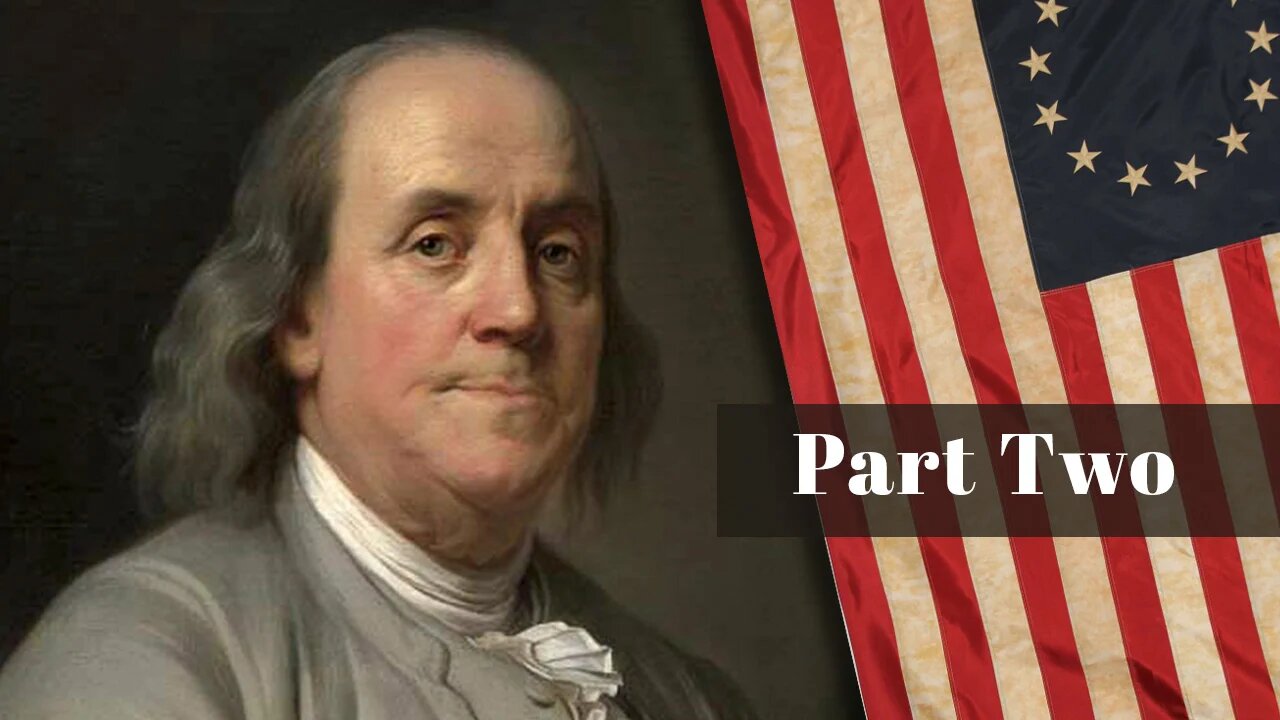 On November 19, 2020, at a press briefing by President Trump’s legal team, Sidney Powell declared that the current battle to overturn the massive vote fraud in the Presidential election “is the 1775 of our generation and beyond.” This statement is neither an exaggeration nor rhetoric. It accurately describes the revolutionary moment before us and the responsibilities which lie on each of us. As in the months prior to the Declaration of Independence, we are now confronted with a bestial imperial faction intent upon crushing all opposition to a globalist agenda of economic looting, dictatorial rule and cultural subversion.

But we also possess the means to defeat that enemy and to restore America to its historic mission. This is not our “long winter” through which we are foreordained to suffer. It is a moment when historic change becomes possible.

In this second installment (see Part I: A Vignette Concerning Benjamin Franklin) on the life and political leadership of Benjamin Franklin, we shall examine his confrontation with the British Empire in 1774, when Franklin stood toe-to-toe against the enemies of America. Franklin faced the most powerful and evil oligarchy in the world. But in the end, he—and America—prevailed. The lessons to be drawn from that fight,—and from the wisdom and courage that Franklin embodied—are most relevant for the situation we face today.

By 1774, Benjamin Franklin had lived 15 of the previous 17 years in London, first as the agent of Pennsylvania and later representing a grouping of several colonies. During those years he worked tirelessly to create a new republican leadership in Britain, to turn Britain away from the path of imperial looting toward a commitment to human progress. This work centered around scientific research in areas such as electricity, steam-power, physical chemistry and canal-building, and included individuals such as Matthew Boulton, William Small and Joseph Priestly. Franklin had a wide and deep circle of collaborators with whom he worked on numerous projects, all designed to benefit the greater good. In effect, Franklin led a conspiracy to overturn and transform the very axioms of the British Empire itself.

Beginning in 1763, however, with the conclusion of the Seven Years War, the oligarchical impulse in Britain became dominant, and the Satanic nature of that oligarchy manifested itself in a determination to crush and subjugate the American colonies. Space does not permit a full examination here of all that was done, but some of those atrocities are still remembered today, including the Stamp Act, the Townshend Acts, the Tea Act and the Quartering Act. Most importantly, the colonies were banned from developing. Settlement west of the Appalachian mountains was outlawed; the issuance of colonial currency was outlawed; and the manufacturing of finished iron and steel goods was prohibited.

Then, in 1774 Lord North’s Intolerable Acts spelled the death of all freedom in America.

On January 11, 1774 Franklin was summoned to appear before the Privy Council to a hearing ostensibly for the purpose of delivering a petition by the Massachusetts House to remove the Royal Governor of Massachusetts, Thomas Hutchinson, from office. Shortly after the hearing started, however, it became apparent that members of the Privy Council had an entirely different agenda. Instead, the subject of the hearing became accusations against Franklin for leaking secret correspondence of Hutchinson to patriots in Boston. In the letters in question, Hutchinson had written that to snuff out discontent there must be a “curtailment of traditional British liberties” in the American colonies. Rather then a simple hearing, Franklin was effectively,—if not technically—put on trial by the Privy Council.

By 1774, Franklin was perceived by the crown and the inner leadership circle of the Empire as the most dangerous man in both Britain and America. In earlier years had been the doyen of British society, and his prestige was such that many foreign dignitaries, ambassadors and scientists would first visit Franklin at his home in London before presenting themselves at St. James Palace. But in 1773 Franklin had published two of his most devastating satires: Rules by Which a Great Empire May Be Reduced to a Small One and An Edict by the King of Prussia. These works, which dissected and demolished the axioms of the British elite, became sensations in London, and this, combined with his tenacious defense of American liberty, now made him public enemy #1.

The January 11 hearing was a mere prelude, and Franklin was called back for a longer appearance before the full Privy Council on January 29, in a building known as the Cockpit. As he entered the room the most powerful leaders of the British Empire awaited him. The entire Privy Council was in attendance—35 individuals, including:

During the ordeal which followed, Franklin was forced to remain standing, alone, facing the seated members of the Council. The original agenda of the examination—he petition by Massachusetts to remove the Governor—was quickly swept aside, and for 90 minutes the Council’s prosecutor, Alexander Wedderburn, Earl of Rosslyn, delivered a vicious tirade against Franklin personally.

In the interim between Franklin’s first appearance on January 11 and January 29, news had reached London of the Boston Tea Party, and this only fueled the rage of the Council against Franklin. The assembled Lords demanded blood. The prosecutor Wedderburn roared that Franklin was a thief, a liar, a traitor and the “prime mover” of the discontent in the colonies. For more than an hour the Lords of the Council, Britain’s elite, cheered, applauded and banged the table as Wedderburn slashed into Franklin.

Joseph Priestly, who was in the gallery, later wrote that “their lordships went out of their way to inflict a wanton outrage upon Franklin.”

At the end of the harangue, the Council demanded that Franklin answer questions, but he refused to be questioned and stood mute. His petition was rejected, and he was dismissed.

Within days of the Privy Council inquisition, a coordinated attack against Franklin went into high gear. London newspapers were full of articles denouncing Franklin as a traitor and an enemy of the Crown. He was called “this old snake,” “the old veteran of mischief,” a “traitor” and “old Doubleface.” In the House of Lords, Lord Sandwich branded Franklin as “one of the bitterest and most mischievous Enemies this Country has ever known.” He heard rumors that the authorities were on their way to arrest him, seize his papers, and throw him into Newgate prison. Friends warned him that his situation was hazardous, that if the situation in the colonies should come to blows, he would doubtless be seized; and they advised him to leave England while yet he could do so. Others warned him that his life was in danger.

Instead Franklin struck back, in newspapers both in America and in London itself. He ignored the dangers, and in numerous published writings he heaped scorn on the suicidal pretensions of Britain’s rulers. He described the disgraceful proceedings of the Privy Council. And he continued to argue America’s cause.

Franklin would remain in Britain for an entire year after the events in the Cockpit. Partly, he kept organizing within the British establishment in an attempt to effect a change in policy. In March of 1774, however, he took on a new responsibility. That month Lord North announced the first of the Intolerable Acts. This pushed the situation in America over the brink, and within weeks organizing began in the individual colonies for the convening of a Continental Congress. Franklin now became the unofficial ambassador of the Congress to the British government.

In mid-December, Franklin finally received a packet containing a set of resolutions that had been approved by the First Continental Congress. At its meeting in Philadelphia, which lasted until late October, the Congress voted a boycott of all British goods if Parliament did not repeal the Intolerable Acts and also reasserted the exclusive authority of the colonial legislatures to make laws for the colonies. Franklin delivered these resolutions to Lord North, the head of the government.

In late March, 1775, Franklin finally sailed from Britain. Later he stated that he was “apprehensive until the last moment,” that he would not be permitted to depart; that the court, which had repeatedly denounced him as a traitor, would order his arrest. On April 18, 1775, while Franklin was in mid-ocean, a contingent of British redcoats clashed with 70 “minutemen” at Lexington, initiating the Revolutionary War.

On May 5, Franklin landed in Philadelphia. Bells were rung throughout the city to celebrate his arrival. Delegates were beginning to gather there for the Second Continental Congress, and Franklin was elected unanimously to the Congress.

Evil, even powerful evil, can be faced, and it can be defeated. It is neither omniscient nor omnipotent. A citizenry which understands its mission and has the courage to act will prevail.